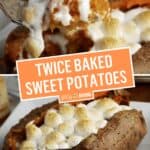 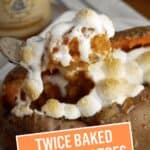 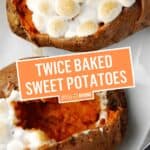 These twice baked sweet potatoes are fully loaded, perfectly sweet and so filling they could be considered a dessert! Perfect for your Thanksgiving table.

Today’s recipe is brought to you by an intense craving for Thanksgiving foods. If I could bring myself to prep an entire holiday meal just for me, one of these bad boys would be cuddled up next to some turkey and stuffing: Twice-Baked Sweet Potatoes.

I used to be afraid of sweet potatoes

Feel free to scroll down if you’re not interested and just want to get to the good stuff – the recipe!

Then, one fateful day, I was at a holiday dinner with my then-boyfriend’s family. They had a wonderful spread of food, almost all of which I already knew I enjoyed – but on that table was a bowl of mashed sweet potato.

The person next to me handed me the bowl and I accepted with a smile, but inside I was freaking out. What if I turn it down and they’re offended? What if I try it, hate it, and promptly vomit all over this clean tablecloth?!

I decided to go with the chance of the latter happening, being completely humiliated and having to walk home 50 miles in the snow. I calmly scooped a respectful amount of sweet potato onto my plate and passed the bowl to its next (decidedly more excited) recipient.

As I went about eating my meal, I kept avoiding the orange mountain on the plate. I knew I had to eat it sooner rather than later, because if I really hated it I would need something else on the plate to eat immediately to get rid of the taste. I scooped a small amount onto my fork, and as I lifted it toward my mouth I could feel myself started to panic about the whole hypothetical vomiting scenario. I chewed, I swallowed, and I was shocked – I LOVED it.

The consistency was creamy and the taste was sweet and flavorful. It was delicious! I patiently waited for a time when reaching for seconds was appropriate, asked if anyone else wanted more, and enthusiastically finished off the bowl.

Good grief, what took me so long?! Thankfully, I now have a great appreciation and love for sweet potatoes in just about any form – my favorite being baked sweet potatoes.

Normally I would just bake the potato, slice it open, add a little butter and brown sugar, and consume. But the craving I had the day I made these was very specific.

I wanted them Thanksgiving casserole-style, covered in marshmallows. I also wanted a gigantic portion, which was lucky because I only had sweet potatoes the size of my head. I should have taken a photo of me holding one for scale because sweetbabyjesus they were huge.

It ended up taking closer to 2.5 hours for me to make them from beginning to end because of the size of the potatoes, but as long as you’re using perfectly normal-sized ones it should be more like the 1.5 hours.

I know, I know – that’s a long time to prep a side dish. But the great thing about these is that almost all of that time is just them baking in the oven, so you’re free to do other things, like prep an entree, clean the bathroom, write a short novel – whatever tickles your fancy.

Plus, it’s totally worth it. I mean, just look at this:

You know what else I wanted? Honey. I wanted it drizzled with copious amounts of honey. The boyfriend had recently gifted me from a bag of goodies from the Boston Public Market, including a couple jars of Boston Honey Company’s different honeys.

They’re so good and so fresh – it kicks the ass of any bear-shaped bottled brand that you’d find in a grocery store.

There’s my #ShopLocal plug of the day. But seriously – Boston Public Market, or whatever the one by you might be. Get there and support your local businesses!

Now go make some twice-baked sweet potatoes and thank me later. And when you’re thanking me, take a picture and tag @stressbaking on Instagram.

What to serve with your baked sweet potatoes: