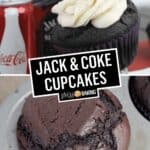 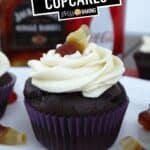 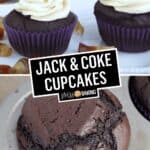 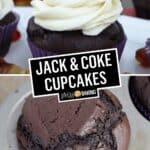 This Jack and Coke Cupcake recipe is, hands down, my most popular recipe.

Readers have commented, pinned, left pictures as comments on Pinterest, tweeted, shared on Facebook, and even emailed me to tell me how much they love them. It’s crazy to me how much you all love this recipe, but… well, I completely get it. It’s ridiculously delicious.

Let’s start with the cupcakes:

My love affair with their cracked, puffy cupcake/muffin tops is borderline obsessive. They’re just so pretty.

Now, about the ganache:

Last but not least, the frosting:

I’d say this email from a coworker after eating one speaks for itself:

Message Body:
Just inhaled your cupcake (that’s what she said) and it was . . . well, after that first bite it’s all a blur.

Seriously, SO delicious and I could eat an entire cake-pan full of that icing. In fact, I’m headed to rehab this afternoon because of it.

You’re a baking genius. Thank you so much for honoring me with one of the few your had!

However, FYI – these cupcakes are not actually going to get you drunk – sorry. 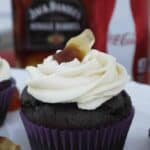 The Best Jack and Coke Cupcakes