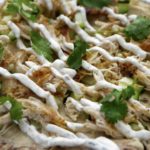 So, funny story… I forgot to publish this post for almost six months. I made these Chicken Shawarma Pita Pizzas back in September 2015, took pictures, edited said pictures, entered the recipe and pictures into this post, and then promptly forgot to ever actually publish it until February 2016.

I have no idea why. It was the week of my birthday before I spent a long weekend in Provincetown, so maybe I was just distracted by my excitement. Yeah… yeah, that’s it. Let’s go with that.

Now, let’s talk shawarma. Ever had it? I hadn’t until 2012, and it was only because of the scene in the Avengers where Tony wakes up after the NYC battle and says, “Have you ever tried shawarma? There’s a shawarma joint about two blocks from here. I don’t know what it is, but I wanna try it.” That made ME want to try it, so I did.

There’s a tiny Mediterranean restaurant by my office that I drove past all the time but had never visited, so this was clearly the perfect reason to give it a try.

They had options for lamb, chicken and beef and I couldn’t decide so the guy made mine with all three. First of all, that was awesome of him. Second of all, it was a TON of food. My reaction? “What the crap is wrong with me?! How have I been missing out on this my whole life?!”

The flavor is incredible and I swear you can smell how much effort has gone into preparing the meat. The meats were placed on what is essentially a giant rotisserie and grilled for an entire day. They shaved off pieces for each serving as they’re ordered, so it really can’t get any fresher than that.

The meat(s) of choice were wrapped in a large pita with cucumber, onion, pickles and tahini and serving to me piping hot. Sweetbabyjesus. Just thinking about it now is making my mouth water.

Hang on, gotta wipe the drool of my keyboard. BRB.

I’d give anything to be able to make a shawarma wrap on a whim at home, but sadly I don’t have a giant spit in my kitchen where I can slow-roast a bunch of meat.

What I CAN do, however, is turn shawarma into individually sized pizzas. That’s right – shawarma pizzas.

Unless you are lucky enough to have a spit to prep the meat with, you have to cheat a little by grilling the marinated the meat (which, by the way, should marinate for at least four hours, but I prefer overnight).

The day I made these, I didn’t have any pickles on hand, and I regret it. So definitely chop some up and add them to yours – it’ll really seal the deal. 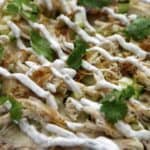