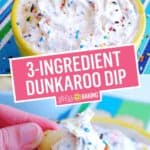 Years ago, I made a Dunkaroo Pie and my coworkers at a previous job went NUTS for it. They raved about how good the animal cracker crust was, but several people commented that they’d rather just dunk animal crackers into it like a dip.

So why not just make them to be like good ol’ childhood favorite Dunkaroos?

… and then I promptly forgot about it until a week ago.

Why this is great as a dip

Since my present-day coworkers had never experienced this sprinkle-filled, cake batter flavored 90s nostalgia, I decided one day to whip some up in the office.

You may have seen my post on Instagram about how my coworker went on an Amazon Prime Now spending spree and I further indulged his new addiction and asked him to add the ingredients for this dip.

Side note: Our order was a really, really weird assortment of stuff. A computer monitor cable, ice cream, Cool Whip, funfetti cake mix, yogurt, pudding, a fan… there may have even been a rom-com and a little of puppies in there, I don’t remember.

But I’m fairly sure that the guy delivering our order assumed it was for a female computer technician who was PMSing, having hot flashes and going through a breakup.

Alright, back to this Dunkaroo Dip – which is ALSO amazing. My desk neighbor dunked a cracker in it and tasted it, grabbed another cracker and tasted it again, and then frantically searched for his own bowl to pile dip and crackers into while muttering, “You are a WIZARD”.

I don’t use Snapchat, but evidently he also snapped a picture of it all with a caption to that effect as well.

Another coworker just kept repeating, “How does this taste like cake batter? I mean, I know what’s in it, but… HOW? HOW IS THIS SO GOOD?!” every time he took a bite.

Others gave me some serious high fives, fist bumps, and a lot of almost NSFW moaning and groaning. When it was almost gone, I dared my office manager to lick the bowl.

While I didn’t actually see her do it, that doesn’t mean it didn’t happen…

So… yeah. I’d say this is a winner winner, cake batter dessert.

I tweaked it a little from my original pie-form recipe to account for the lack of buttery crust that accompanied it. I also wanted to make the quantities easier: a whole box of funfetti cake mix, a whole container of Cool Whip.

When I made this in the office, all I had was one of those little 6 ounce single serving yogurts and it worked out just fine – so if you don’t have a full cup of yogurt, I promise everything will be okay.

Go make a batch of this DunkarooDip and just watch a mass of people come flocking toward you. These are your new best friends – treat them well, and make sure you have a plentiful supply of animal crackers!

After you’ve made this recipe, please leave a comment below with a rating – and if you came from Pinterest, add a photo to the Pin of what you make to the pin to share your experience!

(stress)Baking Tips: 5 Steps You Should Never Skip
← Previous
the last lazy sundae of april
Next →
Let us know what you think!Click here to cancel reply.

From all the things I have read, consuming uncooked flour is a big risk. Food poisoning from eggs is actually pretty slim, it's the flour that can be the problem, so I honestly wouldn't recommend anyone do this.

@Sarah, she said you could bake it first for 5 minutes to eliminate that risk

I have seen this recipe a few years ago and I decided to make it today with a how easy it was. My daughter ran off with the spoon after everything was mixed. Thank You for this. Easy and tasty with or with out the crackers... Thanks

I used french vanilla cake mix and plain yogurt so it wasn't as sweet. I really liked this!

So glad you both liked it – thanks for coming back to leave a comment and rating!

Not sure about the nutrition facts. The cake mix alone (just the powder) would be 100 calories per serving (160 cal per 1/10th of the box).

The nutrition information is pulled from a third party, Nutrifox, and according to their data it is 55 calories per serving since this recipe is about 16 servings worth. But to be honest, if you're worried about the nutritional information with this recipe, it might not be what you want to make ;)

Was very tasty, but I don't feel like it tasted like Dunkaroo dip. Wasn't creamy enough, was more fluffy. As I said, was tasty, so definitely worth a try. Thank you!

I’m planning on making this for a party. How many people would this serve?

That's hard to say, because it depends on how much each person indulges :) But I've served this at parties with 15+ people without an issue.