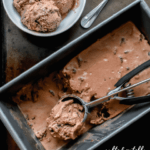 Everyone’s making all these fabulous strawberry recipes, eye-popping blueberry recipes, and beautiful fruity drinks… and then here I am, making a salted Nutella fudge brownie gelato.

Truth be told, this recipe came about because I had a couple Vermont Brownie Company Walnut Chunk brownies in the pantry that I wanted to use in a recipe of some sort, instead of just inhaling them while sitting on the couch.

I just chopped ’em up and tossed them in at the end of the churning cycle to give this gelato more dimension and an extra chocolatey nutty bite. I just freaking love add ins.

.. and also some chopped chocolate.

I CAN’T DENY MY HEART WHAT IT WANTS. I’M SORRY.

The dog wanted to help, and didn’t really understand “No, chocolate’s bad for you”, “Don’t lick that bowl” or “Stop trying to eat the damn gelato”.

How this gelato differs from ice cream

Since this is gelato, it’s not as thick and fluffy as ice cream when you our it into your container. It’s about half the volume of a normal churned ice cream recipe, so just keep that in mind when you’re planning how many servings this might actually last you.

For me? Probably three. Maybe four.

But then again, “serving sizes” sort of mean nothing to me.

Soft right from the freezer

One of the nice things about this is that you don’t need to worry about needing to let it sit out for a bit so that it softens a bit before you dig in – it’s ready and rarin’ to go straight out of the freezer.

What kind of brownies should I use?

Use whatever you’d like! If you have pre-made brownies lying around, chop up one or two of them (depending on the size). If you’ve got a bakery style, gigantic monster of a brownie, one is probably all you’ll need.

You can also make a batch of homemade fugdy brownies and sacrifice a couple to the cause of this gelato.

Got Nutella fever now? Me, too.

Queue up these recipes next: