This post may contain affiliate links and I may earn a small commission with each sale.
Jump to Recipe 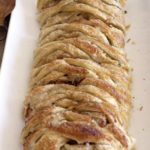 If you’d like to skip this, just jump right to the recipe!

Welcome to October! This month’s theme is… apples!

You see this apple strudel above? It was made possible by a very small dent in my very large basket of apples I picked this past weekend. And because it was a very small dent, I have enough apples left to make 683590135 more apple strudels. My German heritage is not upset by this in the least. Strudel for one, strudel for all! I should start making strudels and just passing them out to people on the T. Okay… maybe not. I’m going to slow my roll and back up for a minute.

I love apple picking. I look forward to the day apple orchards open for PYO like most kids impatiently anticipate Christmas Day. The problem is that my “Christmas Day” varies from year to year because it is based entirely on how naughty or nice Mother Nature was all year.

I usually go the weekend of my birthday, but since I was in Provincetown this year (post about that and the phenomenal B&B I stayed in coming soon!) I wasn’t near any PYO orchards. Did you know there aren’t any on the western side/tip of Cape Cod? I was a little disappointed about that, but I quickly recovered from my sorrow by inhaling a container of Nutella mixed with Cool Whip.

Kids… don’t try that at home. I’m a professional.

I try to pick a new orchard for my first apple picking excursion each year, and since there is NO shortage of those in New England it’s not a problem. Sometimes I only have enough time to bike down the street to Honey Pot Hill Orchards in Stow, in which case I load a backpack full of apples, cider, and cider donuts (and then I go home and make even more cider donuts). Other times I will build a whole weekend around a destination PYO experience in Northern Vermont or the top of Maine. It really just varies on my life situation at the time, but I always know it’s going to be awesome. I always end up with an ungodly amount of apples and I always enjoy myself.

This year I chose Scott Farm in Dummerston, Vermont for my first PYOAE (Pick Your Own Apples Excursion – duh). It’s only a little over an hour away from the boyfriend’s place, so it was a nice little day trip with a quick stop in Brattleboro for breakfast. Just look at this view:

Totally worth the drive to the middle of nowhere, Vermont. Rolling hills chock full of apple trees and history.

Fun fact: Did you know they filmed part of Cider House Rules at this orchard? This is “Ocean View Orchard”, which will never stop being funny to me since this is pretty freaking far away from ocean. One of his lines is that he’s a lobsterman and and orchardman… good luck with that three hour commute to the orchard every day, Homer!

Oh, movies. You’re so silly. Just for fun, here are some of my pictures of the property, side by side with shots from the movie:

I’m just gonna say it: I’m a much more dedicated orchardman than Homer. He uses ladders and I use my own brute strength to climb the trees to get what I need. In your face, Tobey Maguire.

Another fun fact: The orchard is found at 707 Kipling Road, named after Rudyard Kipling – the author of the children’s classic story The Jungle Book!

Yet another fun fact: On that same road is the Naulakha house where Kipling wrote the book, which can be rented out as a vacation home. Awesome, right? There’s also the Kipling Carriage House on the estate that looks equally as beautiful. I’ve never gotten the chance to stay at either because the price per night is a little too rich for my blood, but I’d love to hear from someone who has!

Anyway, enough of the history lesson. Here are a few more shots from our visit:

I might print and frame the last one. The only thing that would make it better is if the trees behind the property had already turned to their gorgeous fall colors.

We paid for our ginormous bushel of apples in the farm stand and were helped by the one and only Ezekiel! He’s the orchard manager and easily recognized in the community as the epitome of everything Vermont stands for (even though he’s originally from Massachusetts): friendly, helpful, and it’s clear the takes pride in his work and loves what he does.

Now onto the real meat and potatoes of this post (neither of which you will find on this page, just to be clear): Apple Strudel.

It’s one of my all-time favorite desserts. It makes me all warm and fuzzy, and pairs perfectly with an ice cold glass of cider or a cup of warm coffee. I eat it for breakfast. I eat it for dessert. It’s magical and versatile and you can’t convince me not to eat it whenever the heck I want.

The cinnamon sugar filling that envelops the sliced apples is equal parts tart and sweet thanks to my secret ingredient – lemon juice. As you slice your apples, you coat them in freshly squeezed lemon juice and it prevents them from browning while you prepare everything else. It gives it the perfect little zing to complement the rest of the pastry.

I want to encourage you to make this repeatedly. Try something new every time – I do! The recipe I’m sharing with you today is my base, but I throw in different stuff to switch it up all the time. Sometimes I add raisins that I’ve soaked in brandy.

Sometimes I add walnuts instead of almonds. Sometimes I don’t even add nuts at all – but the day I made this strudel I was feeling a little nutty (GET IT?!).

Nuts give it a little extra crunch, and sometimes that’s what I want. Other times I prefer to leave nuts out altogether, and really load up on the cinnamon sugar filling. Those are the days I’ve forgotten that I have any sort of health consciousness and accidentally eat the entire pastry myself.

This is why you slice things, people. If you leave it whole and on your counter, you might just sit down on your couch with it and eat it like a sub.

…not that I’ve ever done that.

I made this strudel and added a layer of chopped pecans with some butter. It is a wonderful recipe.

That sounds delicious, I'm so glad you liked it! Thanks so much for coming back to leave a comment and rating.