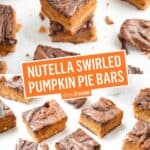 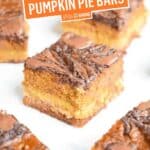 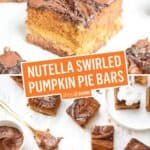 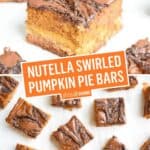 Getting into paleo baking is like starting from scratch. I feel like I should forget everything I know and treat it like a whole new world.

At this point, I consider myself a novice who’s had some beginner’s luck that has a lot to learn from the pros. It’s a weird place to be in after running this blog for a few year, but it’s also sort of fun.

One of the things I’ve learned is that making frosting that doesn’t need to be refrigerated is basically impossible and that I should probably stop trying for a while because I might actually lose my mind trying.

I’ve been taking the route instead of stuffing things with chocolate chips, drizzling them with honey, and — as of this recipe — swirling the tops with homemade paleo Nutella.

I found this recipe and I have to admit, it was easier than I thought it would be. It kinda makes me mad at myself for not making it sooner! Whip some up, store it in a jar, and use it as you like.

But first – use it for these pumpkin pie bars.

What you need to make these bars

To make these, you don’t need anything crazy. You don’t have to deal with making a pie crust, stressing out that it might crack.

Coconut oil has become essential for me in paleo baking. It acts as a great replacement fat, and can be used in either liquid or solid form to get different kind of textures in your finished product.

I’ve been buying so much of it, but I only ever find it in small containers and I blow through them in no time flat. I probably look like a crazy person with a cart full of coconut oil all the time. I bet the people at the store call me coconut lady or something… I just know it.

You’re going to use the coconut oil twice

Once in the shortbread crust, and again in the homemade Nutella.

This crust makes a nice base for the pumpkin pie filling, and makes for a lovely layered effect when you sink your fork in for a bite.

When I originally made this, I wasn’t even going for that but it was a pleasant surprise!

That swirl, though. Just look at it.

You can top yours with whipped cream, as is traditional. Or be a rebel and it eat without any topping at all.

I’ve added a sprinkle of sea salt on top before and I’d highly recommend it. It gives it a certain… je ne sais quoi.

This freaking cat that thinks, “No, get off the table!” actually means “Please, climb up here and help yourself”.

Word to the wise: Indulge yourself in as many as you can before your crazy cat tries to make off with them.

Tis the season for all the (paleo) pumpkin things! 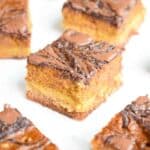 Not paleo? Feel free to use real Nutella!