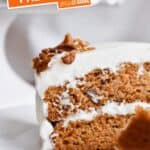 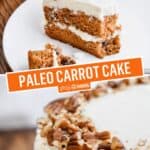 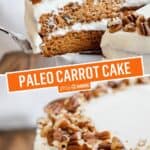 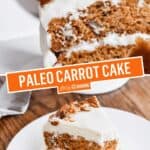 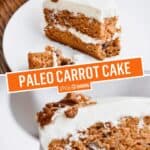 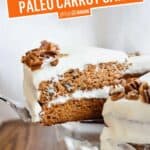 Perfectly moist (but not heavy) spice cake loaded with flavor and fresh carrots. The cake itself is paleo, and I’ve provided several options for delicious paleo and non-paleo frostings – because carrot cake isn’t complete without a creamy, tangy frosting! Try my carrot cake donuts next.

Not in the mood for story time? Feel free to jump straight to the recipe at the bottom!

I’m sure you’re asking yourself, “So why ON EARTH are you putting a carrot cake on your blog?” Because I love you. That’s why.

But here’s the thing… I don’t hate it so much that I can’t possible be around it. I can deal with it enough to taste test it before handing it over to my husband to have him give me his carrot cake-loving opinion.  His verdict?

You know who else was a fan of this? The cats. They wanted a bite so badly they were purring while circling the plate from which Bill was eating.

It started out as a casual sniffing of the air, as if to say, “My, what a pleasant aroma! I wonder what is emitting such a lovely scent.”

Which quickly turned to, “Heeeeeeeeey, girlfriend!” (we’ve determined that this cat is a fabulous gay man trapped inside a feline’s body, FYI)

And it ends in a culmination of not-so-subtle sniffing right up against the plate and trying to flip the plate on the ground to make it look like an accident.

So anyway, the cake.

I had originally planned to turn this into a three layer cake, but quite honestly I never make those because I feel like it’s just too much. It’s too tall for your fork, you have to lay the slice of cake down on it’s side to eat it, and it’s just generally a ton of food.

I don’t want my slices of cake the sizes of small planets, thankyouverymuch. It’s easier to slice, easier to serve, easier to eat, and just… easier. And I’m all about easier options these days.

I might not like carrot cake, but you know what? I have to admit – this one is pretty damn good. Not to toot my own horn here, but I think I may have a found a carrot cake recipe even I’d be willing to eat.

I’m not going to go crazy and eat an entire slice or anything, but I wouldn’t turn my nose up at sneaking a bite or two.

Don’t stress out about grating the carrots. If you have a food processor with a shredding disc, then it’s going to be a breeze that’ll take you all of a minute or two.

If you don’t have one, you can certainly use a box grater – but it’s gonna take you a while. It’ll be worth it though, I swear.

But whatever you do, DO NOT USE PRE-SHREDDED CARROTS. I’m serious. Those bagged shredded carrots at the store are dry and terrible.

Spend the little bit of time to clean your carrots, peel them, and grate them. Just be careful with your hands because I love you and I don’t want you to get hurt. If you don’t have a grater, you just want to get one like this (affiliate link) and use the largest holes.

Why this carrot cake is so good

Let’s zoom in on this cake a bit.

Hopefully you can tell, but this isn’t a super dense cake. It’s moist, but not heavy. The nuts in the batter give it a nice soft crunch in each bite, but if you’re not down with nuts then just leave them out.

No harm, no foul. You may just end up with a little less height in your final product, but by no means will it be flat.

You’ll also miss out on decorating the frosting, which might be my favorite thing about this cake. It’s the simplest decoration I think I’ve ever done. Just a layer of frosting spread across the top and chopped pecans around the outer edge. That’s it.

No piping tips (aff link), no fondant, nothing crazy or difficult. I don’t even go out of my way to ensure the entire sides are covered, so I almost treat it like a mix between a naked cake and adding a crumb coat.

You can add as little or as much frosting as you’d like – just note that what you see in these pictures is the amount I list in my recipe below. Two layers of cake, a center layer of frosting, with a light coat around the edges and a decent layer on top.

Side note: If you’re in the market for one, I love my Wilton offset icing spatula (aff link) for coating cakes. It’s lightweight, comfortable to hold, and works like a dream. Much like this frosting. Isn’t is dreamy looking?

That’s the only word I can come up with to describe it. For these pictures, you’re seeing a whipped cream cheese frosting, but I’ve provided options to two paleo frostings that I love as well if you’re truly trying to keep it paleo. 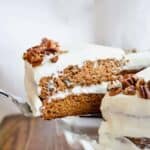