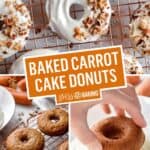 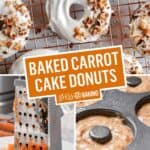 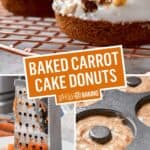 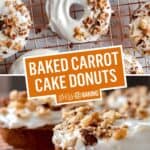 Moist and chewy baked carrot cake donuts are perfectly spiced and topped with plenty of tangy cream cheese icing – and they’ll be ready in less than 30 minutes! Eat these for breakfast, then make my irresistible carrot cake for dessert.

I’m not a fan of pranks or hoaxes. I love joking around, and I like surprised, but I just don’t like pranks. Don’t like executing them, don’t like being a recipient of them. Obviously plenty of people enjoy them because there are entire TV shows and YouTube channels dedicated to it, but… I just don’t get it. Too much of what’s happening in the world today feels like it just has to be a joke, yet it’s all real. So, I really don’t need a day dedicated to fooling people.

I spend the whole day paranoid that someone is going to do something to me! Does anyone else feel that way? Luckily, I work from home now and I don’t have to physically encounter anyone except my husband and the animals – none of which are really ones for pulling pranks.

There’s still the possibility that one of my remote coworkers could try something, but I’m determined to remain optimistic. Thoughts and prayers to those of you who work/live/commute with people who thrive on this day.

While I remain diligent in my fortress of solitude, I’m going to finish off these baked carrot cake donuts I made over the weekend. I had originally planned to make my paleo carrot cake into cupcakes, but realized I didn’t have the right ingredients for it. Sooooo, I opted to tweak the recipe to make it non-paleo (sorry) and for some tasty, tasty, donuts.

First of all, we’re using freshly grated carrots. I’ve talked about this before, and I’m serious about it. Those bagged shredded carrots at the store are dry and terrible. They’re going to make your donuts SUCK. End of story.

Spend the little bit of time to clean your carrots, peel them, and grate them. Just be careful with your hands because I love you and I don’t want you to get hurt.  If you don’t have a grater, you just want to get one like this (affiliate link) and use the larger holes like you see in the picture below.

Secondly, they’re baked and not fried. I almost never fry donuts at home (these maple bacon donuts were an exception), so they’re, moist and chewy with a cakey texture.

Frankly, that’s how I like my donuts. I prefer a cakey donut over those melt-in-your-mouth Krispy Kreme kind – although, those are fricking delicious once in a while.

They just make me feel terrible after I’m done eating. Maybe it’s because I eat 12 of them in one sitting? Nah… that can’t be it.

They’re dipped in a cream cheese icing that’s just sweet and tangy enough to complement the donuts without being overwhelming. The worst thing for me is to bite into a donut and it’s so overwhelmed with a sweet frosting that I can’t taste the donut itself.

If you’re not down with the icing, you could definitely eat them without it. Maybe add a sprinkle of powdered sugar or cinnamon on top for a lil somethin’ somethin’.

I like to top mine with a mix of chopped walnuts and pecans. You could leave them off, or just do one nut or the other.

It adds a little crunch, which I love, but it also adds a little pizzazz to the donuts’ appearance. The donuts want to look fancy, okay?

Can’t you just see the confidence that donut is emanating? Can’t you feel how pulled-together it feels?

Because you know if you look good, you feel good. And these donuts feel good.

Some need more flair than others, and it definitely doesn’t have anything to do with whether or not someone accidentally dropped a utensil on top of them, giving them a big dent that icing only mostly covered.

Definitely doesn’t have anything to do with that. We’re just going to say that those donuts are a little extra. 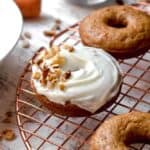