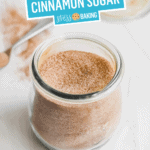 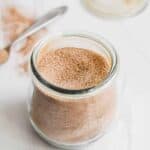 All you need are two ingredients and a couple minutes to make your own cinnamon sugar! Great for snickerdoodle cookies, apple cider donuts and much, much more.

What is cinnamon sugar made of?

Don’t laugh! People legitimately ask this question, and I think it’s because we live in a time where it’s so rare to find things that have few and simple ingredients.

So to answer that question… it really is just cinnamon and sugar. Well, ground cinnamon and granulated sugar, to be precise.

Don’t just stick a cinnamon stick in some white sugar and cross your fingers.

As much as I love the nostalgia factor of the Domino Sugar ‘N Cinnamon bottles, it’s just so easy to make yourself.

What is the best ratio of cinnamon to sugar?

Personally, I find 1 tablespoon ground cinnamon for every ¼ cup granulated sugar to be the perfect ratio.

If you’re looking for a sweeter and less strong cinnamon flavor, you can reduce that to ½ tablespoon for every ¼ cup granulated sugar.

How should I store cinnamon sugar?

You’ll want to store your cinnamon sugar in a tight-lidded container, preferably glass. I love using small Weck jars or mason jars (because I have… just… so many).

If you happen to have a store-bought container like McCormick or Domino, you can simply refill that with your fresh mixture!

What can I use cinnamon sugar for?

The short answer: So many things.

But in our house, we use it for:

5 from 1 vote
All you need are two ingredients and a couple minutes to make your own cinnamon sugar!
Print Recipe Pin Recipe
Prep Time 2 minutes
Total Time 2 minutes
Servings 8 servings (½ cup in total)

Nutritional information listed is for 1 tablespoon, but your actual serving size will vary on how you use it!