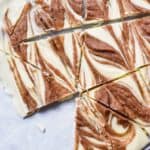 In the food blog world, autumn is all about apples, pumpkins, spice cakes, caramel and candy corn. There are adorable edible monsters for Halloween and turkey shaped cookies for Thanksgiving.

Meanwhile, I’m over here craving all things cinnamon sugar. Give me all of the cinnamon rolls and snickerdoodles you can find. And while I’m waiting for you to collect those and deliver them ASAP, I’m going to chomp on this white chocolate cinnamon roll bark.

Here’s the thing about this bark: it’s ridiculously easy. You melt some butter and add brown sugar and cinnamon, melt some white chocolate, and then spread it out and swiiiiiiiiiirl. It’s a good time.

Then you just pop it in the freezer and let it set. It won’t become 100% hard like most bark because the cinnamon sugar swirls won’t fully harden, but that’s exactly what I wanted. Most bark is snappy and crunchy (like my Christmas Crack), but your teeth will melt right into this one giving you a creamy and sweet treat.

Side note: are you as mesmerized by the swirls as I am? I kinda can’t look away. It’s a special kind of food art.

As with any bark, you can take a big knife or pizza cutter (love love love this pizza cutter) and roughly cut it into big pieces. You’ll find that they’ll inevitably break in random places, which gives it the perfect imperfection that I love so much about bark.

Speaking of stuff I love, have you been to my Amazon Influencer Shop page? It’s a collection of all my favorite products that I use and recommend. So often I get questions about what kind of mixer I have, or what kind of silicon mats I use – the answers are all there!

P.S.: You can make the bark as thick as you want. If you want it thicker than you see below, you’ll want to double the amount of white chocolate, but you can still use the same amount of the rest of the ingredients. 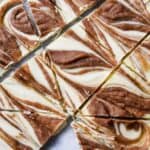