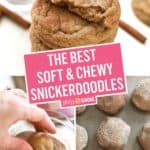 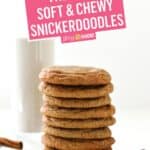 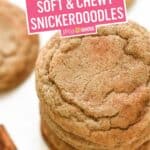 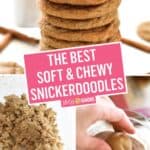 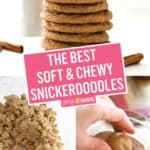 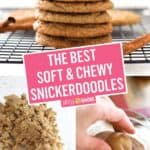 Snickerdoodles are light and soft cinnamon sugar cookies that are the perfect combination of sweet and tangy with that signature scent and crinkle tops. Plus, they’re easily made vegan! Add these to your favorite cookie recipes.

I recently discovered that everyone and their mother does NOT know what snickerdoodles are. If you are aware of them, let me pause to let you pick your jaw up off the floor.

For those people in the world who think I’m just making up a weird word, let’s just get this out of the way right now: Snickerdoodles have nothing to do with Snickers, or doodles.

Okay, so what are snickerdoodles?

There are no peanuts or chocolate involved, and you can’t use them to draw.

Snickerdoodles are a soft, chewy cookie that is coated with cinnamon sugar and includes a key ingredient that separates them from a plain ol’ sugar cookie: cream of tartar.

Why in the world are they called snickerdoodles?

That’s a fabulous question. I’ve heard a few different theories about the name, but if you want to go by Wikipedia:

The Joy of Cooking claims that snickerdoodles are probably German in origin, and that the name is a corruption of the German word Schneckennudel, a Palatine variety of schnecken.

It is also possible that the name is simply a nonsense word with no particular meaning, originating from a New England tradition of whimsical cookie names. The Oxford English Dictionary claims the word’s origin is “uncertain”, and possibly a portmanteau of the word “snicker”, an “imitative” English word with Scottish roots that indicates a “smothered laugh”, and “doodle”, a Germanic loanword into English meaning a “simple or foolish fellow,” originally derived from the Germanic dudeltopf, meaning “simpleton, noodle, night-cap”.

I just love reading about this kind of stuff. It also makes me wish I could invent a ridiculous word.

Tips for making the best snickerdoodles

Beat the butter until pale and fluffy. Making sure to incorporate enough air into the butter is going to help produce the signature light and soft dough we’re looking for. See the top two photos in the collage above! Notice how they’re a very pale yellow.

Mix your dry ingredients separately. I’ve talked about why you need to do that in this post, and this recipe is no exception. You’ll want to incorporate the dry ingredient mixture into the wet on low speed until you’ve produced a thick dough.

The ratio of sugar to cinnamon matters. You’re going to roll the balls of dough in a mixture of ¼ cup granulated sugar and 1 ½ teaspoons ground cinnamon. It’s the perfect combination of sugary and spice.

Give them plenty of space on the cookie sheets. They’re going to spread quite a bit, so they need room to do so! I never do more than 8 cookies to a sheet, and you can see how I space them out in the photo above.

Bake at 375°F. Many cookie recipes are baked at 350°F, but we’re going to do a tad higher temperature to allow them to puff up and then cool back down and get those beautiful crinkled tops.

While they set on the baking sheet, you can watch them go from puffy tops to flatter, crinkled tops. If I’m honest, that process might be my favorite thing in all of baking.

As you might already know, I have a bit of a love affair with chewy, crinkled cookies:

How to make vegan snickerdoodles

I’m not vegan and rarely go out of my way to make recipes vegan-friendly (sorry), but this is one that I’ve easily made vegan for a former coworker of mine.

The only difference between the vegan and non-vegan version of this recipe (you know, aside from… being vegan) is that the vegan version usually turns out puffier and less thin.

But both versions are soft and taste like comfort. Coated in cinnamon sugar.

The cinnamon flavor isn’t overwhelming, and goes fantastically with a nice bowl of vanilla ice cream.

Want to eat these the Leslie way? Here’s what you do: 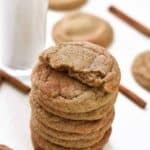 To make this recipe vegan: