This post may contain affiliate links and I may earn a small commission with each sale.
Jump to Recipe Pin Recipe
5 from 1 vote 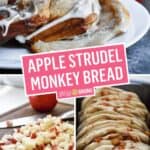 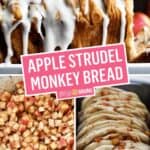 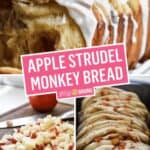 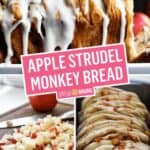 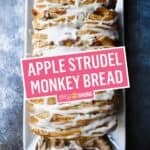 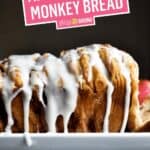 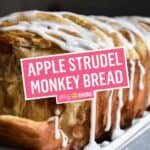 A German take on the classic monkey bread – soft biscuits oozing with diced apples, sugar and cinnamon and topped with a sweet icing glaze. Add this to your apple favorites with Homemade Apple Cinnamon Toaster Strudels, Apple Cider Donuts and Paleo Apple Galette with Maple Drizzle!

Monkey bread is delicious, it’s filling, and smells amazing. But… it’s messy. And when your hands are all sticky and you try to pick up a glass of milk, now your glass is sticky.

And then you pick up a napkin to clean your hands and glass, and now your hands are stuck to the napkin, and it starts falling apart and it’s glued to your fingers.

And then you need to go wash your hands and finally just grab a fork to eat the rest of it and by the time you get back someone has stolen the rest of your monkey bread because you took too long.

However, apple strudel, doesn’t have this problem (stay with me on this one). I eat apple strudel with a fork or spoon – mostly because I consume massive portions in one sitting and it always has to be accompanied by a scoop of vanilla ice cream.

Eating ice cream with my hands would be difficult and awkward. So, silverware it is.

So, I started thinking that if I combined apple strudel with monkey bread, it would give me an excuse to eat it with a fork and not be judged. I also thought that if I made it in a loaf pan instead of a tube pan it would be easier to break apart since they’d just be slices and not little cubes you have to finagle to break apart.

I decided to cheat a little and take the easy route: I just grabbed a can of biscuits and the ingredients for the filling of my apple strudel.

Side note: Is there ever going to be a time when opening a can of biscuits doesn’t scare the bejeezus out of me? I kinda figured by my 30s I’d stop being afraid of a can of pastry dough.

First, we need to prep the biscuit dough:

1) Remove all the biscuits from the cans and slice each biscuit in half. If you’re using the flaky kind, you might be able to just separate them in half with your fingers without much of an issue.

2) and 3) Gently pull and stretch each half-biscuit round to about the width of the loaf pan. They’ll be about twice their original size.

4) You’ll end up with a big pile of stretched out biscuits. Feel free to stack them into a weird biscuit dough tower, or lay them out on a flat surface.

Next we need to prep the apples:

1) Core and dice each of the apples.

2) Toss the diced apples in a medium bowl with freshly squeezed lemon juice – this will keep them from browning.

4) Toss and/or stir to combine.

1) Add the prepared apples to a medium saucepan.

3) and 4) After about 5 minutes the apples will have softened and released their juices. Remove from heat and let them cool and the sauce will thicken.

1) I find that starting out with your loaf pan (sprayed with nonstick spray (aff link)) tilted inside a cereal bowl helps a lot!

2) Start with a biscuit round, follow with a tablespoon of apple filling, and alternate like that the entire length of the pan (finishing with a biscuit round). As you start assembling further up the pan, tilt the pan a little more and let some of the liquid drain into the bowl.

3) Pour any of the liquid that came out back over the fully assembled loaf before you put it in the oven.

4) Cover the pan with aluminum foil and bake for 45 minutes, then remove the foil and bake for another 10-15 minutes or until the top is golden brown and the insides are cooked through. You can check with a toothpick near the center of the loaf.

It’s going to be golden brown and crisp on the outside, but the insides will be soft and filled with mouth-watering apple cinnamon flavor.

And as far as I’m concerned, no form of apple strudel is complete until it’s topped with an icing glaze, so that needs to happen.

You want it to be easily drizzled on top of the bread, so if you need to add more milk to make it pour-able just add a little bit more at a time, stir to combine, and check the consistency.

Thoroughly coat the bread by drizzling it on with a spoon. If you’d prefer to use a spatula to spread it on, leave it at a slightly thicker consistency.

But really, how could you say no to that drizzle? You can’t.

That’s the answer – you can’t.

Now start tearing it into pieces and dive in!

When it’s served warm, it smells exactly like apple strudel – and tastes like it, too. Ooey, gooey apples covered in cinnamon sugar and vanilla glaze.

If you need to reheat it, just a piece or two in the microwave for 10 seconds.

You won’t even miss the typical crisp strudel pastry crust, I promise. Go ahead – grab another slice before you let others dive in. I won’t tell.

Oh, hell – grab the whole plate and lock yourself in the pantry and finish it off.

I’m sure you deserve it. 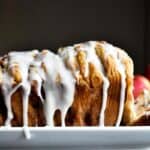 This post was originally published in September 2015 and was updated for clarity and new photos in October 2019.

Mix the cut biscuits into the apple mixture, making sure to mix everything really well so the apple mixture is coating everything.  Spray a bundt pan generously with cooking spray and then pour the biscuit and apple mixture into the pan.  Bake at 350?F for 40-50 minutes or until the bread is baked through.  Once you remove from the oven invert the pan onto a plate while it is still hot so that all that gooey goodness doesn t stick to the pan.

Thanks for sharing your take on my recipe!