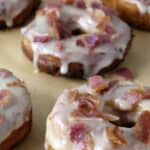 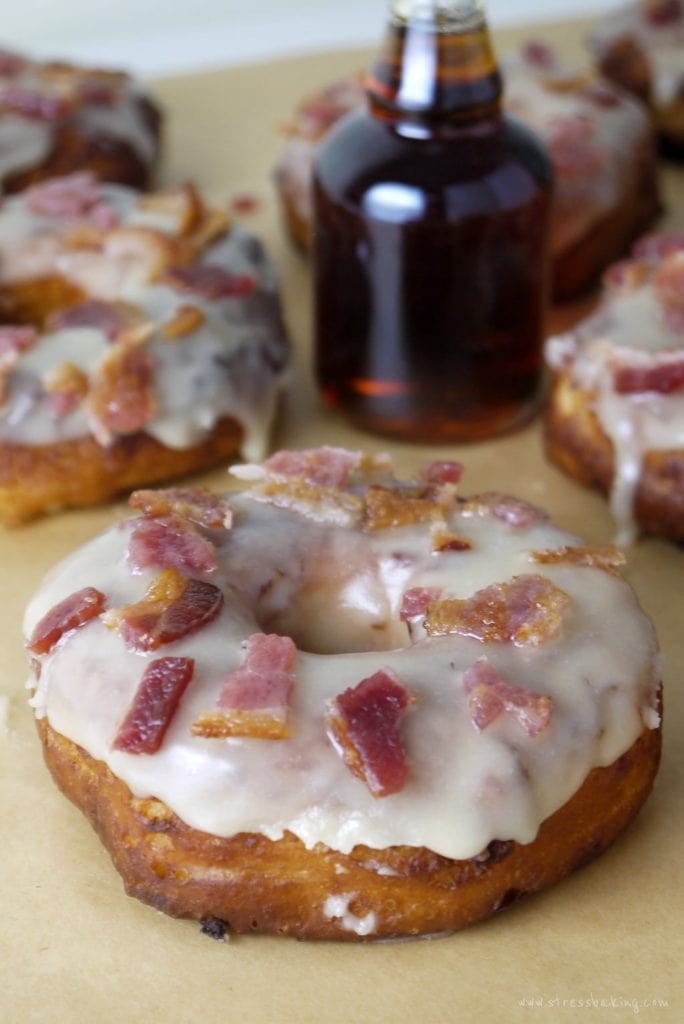 Happy First Day of Spring! Annnnnd it’s snowing. I had planned to post some happy, Spring-y recipe that would remind us all that the snow will soon be gone and flowers will once again bloom. And then I looked outside and… snow.

So instead, let’s talk about these donuts. They’re maple-y and bacon-y and remind me of Vermont. I suppose it helps that I used Vermont Smoke & Cure bacon and Grade A medium amber maple syrup from Cold Hollow Cider Mill.

Let’s also talk about the fact that the piece of bacon in the middle forefront of the picture above looks like the state of Vermont. Coincidence? Well… yes, probably. But still.

Here’s the thing about these donuts… they’re not really donuts at all. I cheated. I admit it. You guys know I don’t like taking shortcuts and like to make everything from scratch — but sometimes you just need a donut, and you don’t have time to go through the arduous process of making them.

Want to know the shortcut? Use canned biscuits. I’ll give you a minute to pick your jaw up off the floor. 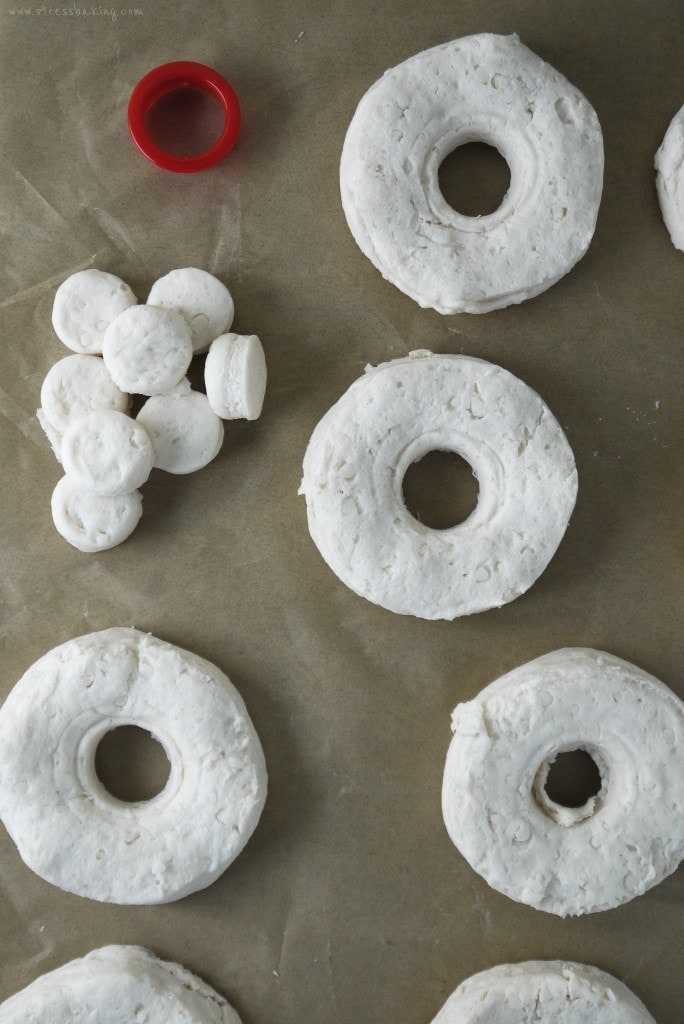 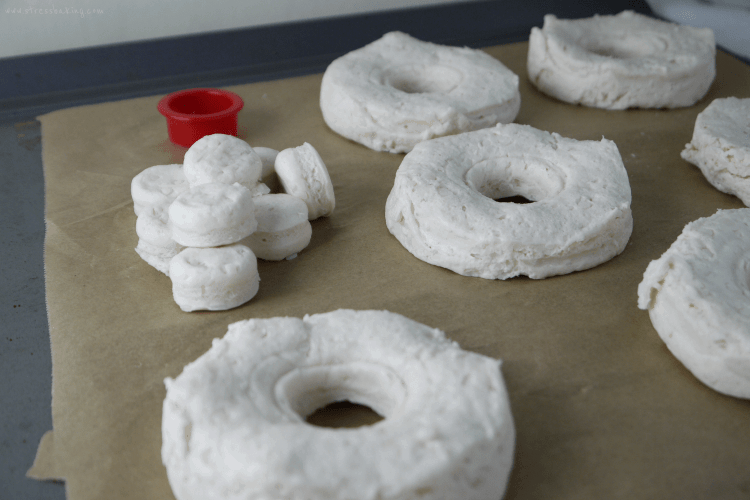 It’s so easy, and requires practically no effort. Take a can of biscuits (not the super flaky kind, it’d be a disaster – I used Grands Homestyle Buttermilk) and use something small and round to cut out the center of each biscuit. I happen to have a set of circular cookie cutters of varying sizes, and the smallest one was perfect. Don’t throw away the middles! You can turn those into little donut holes.

The next step is to heat a pan of oil and place each biscuit in for a few seconds on each side, and voila! You have donuts. They end up lighter than what you would get with a cakey donut, but that’s what I love about it. It’s not heavy, so that makes it okay that I loaded them up with maple glaze and bacon. Right? Right. 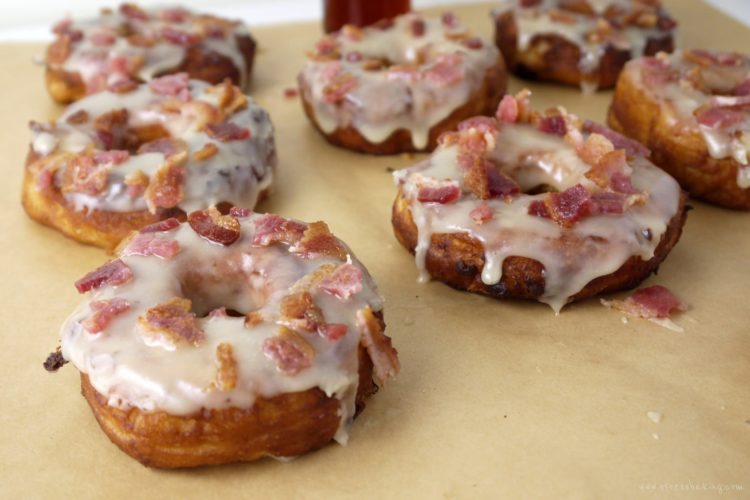 Just look at those things. My mouth is watering looking at them, and I was just eating them. I’m not even hungry, and I still want to shove at least two more in my face. 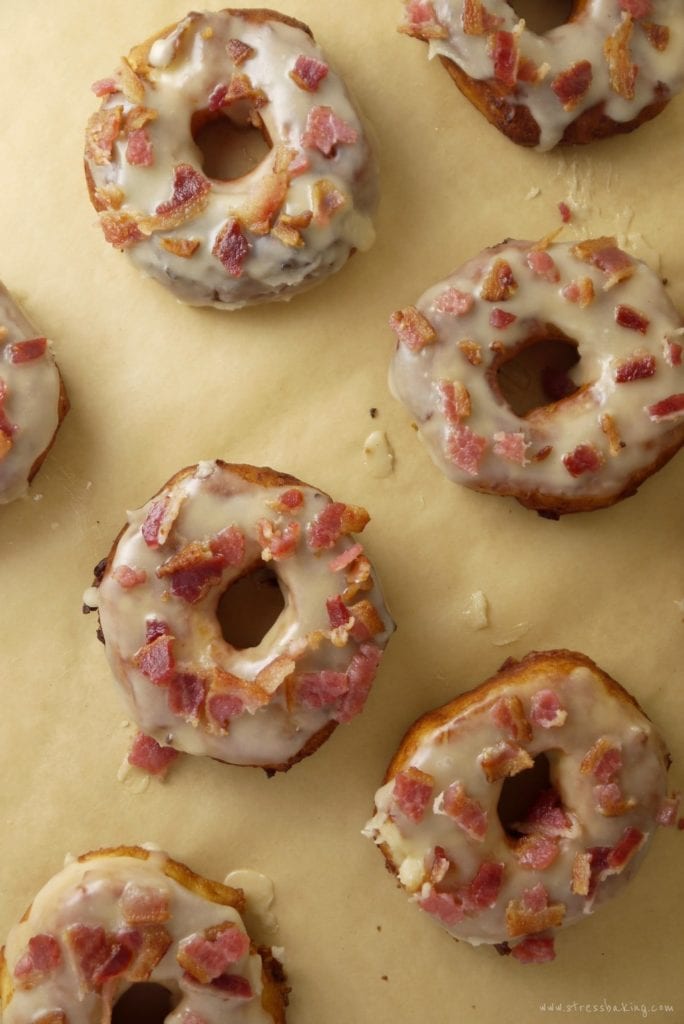 I’m just going to let you stare at these for a while. Don’t worry, I’ll wait. 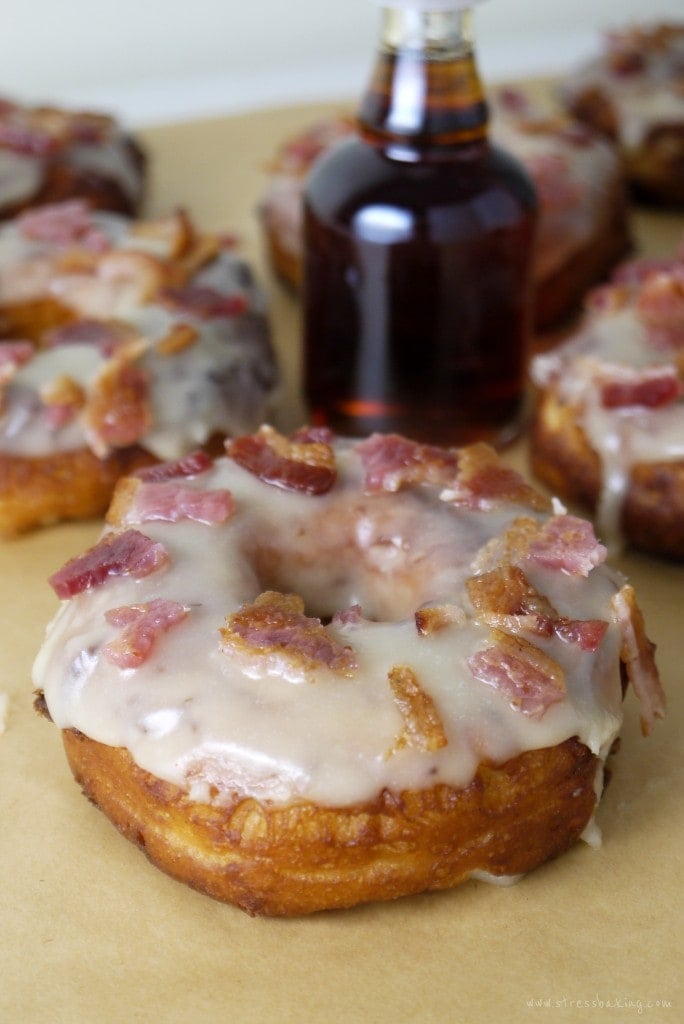 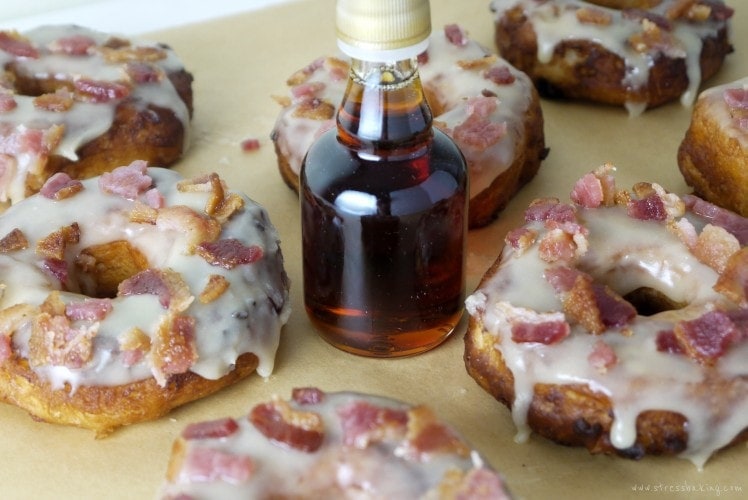 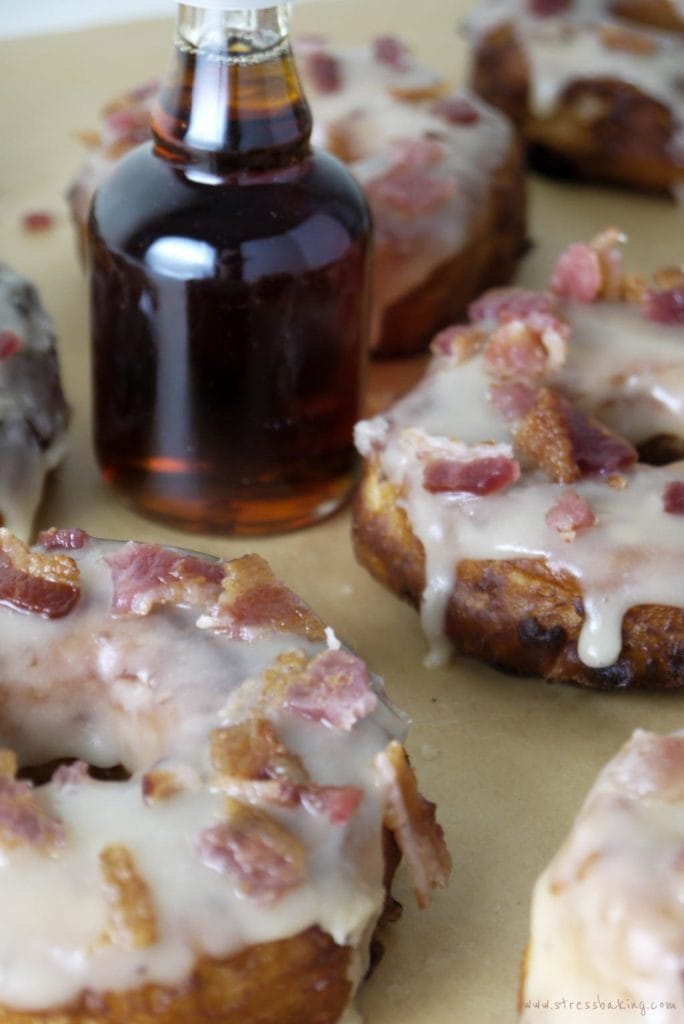 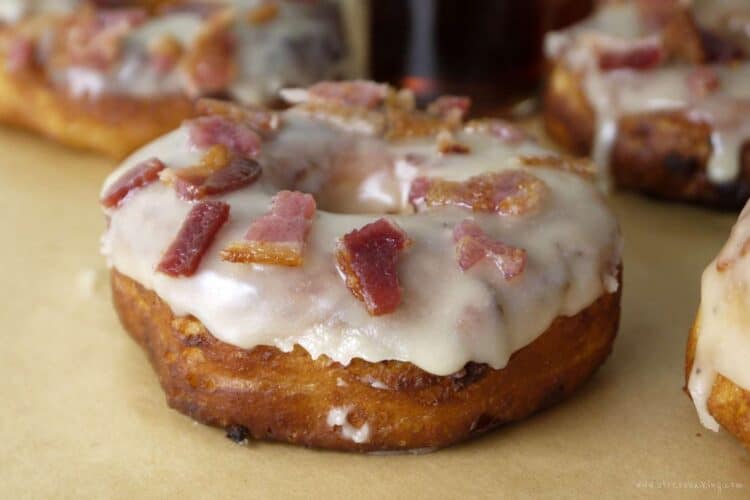 Have you run off to the kitchen yet? If so, you should probably come back. You’re not going to know how to make them if you don’t keep scrolling down. 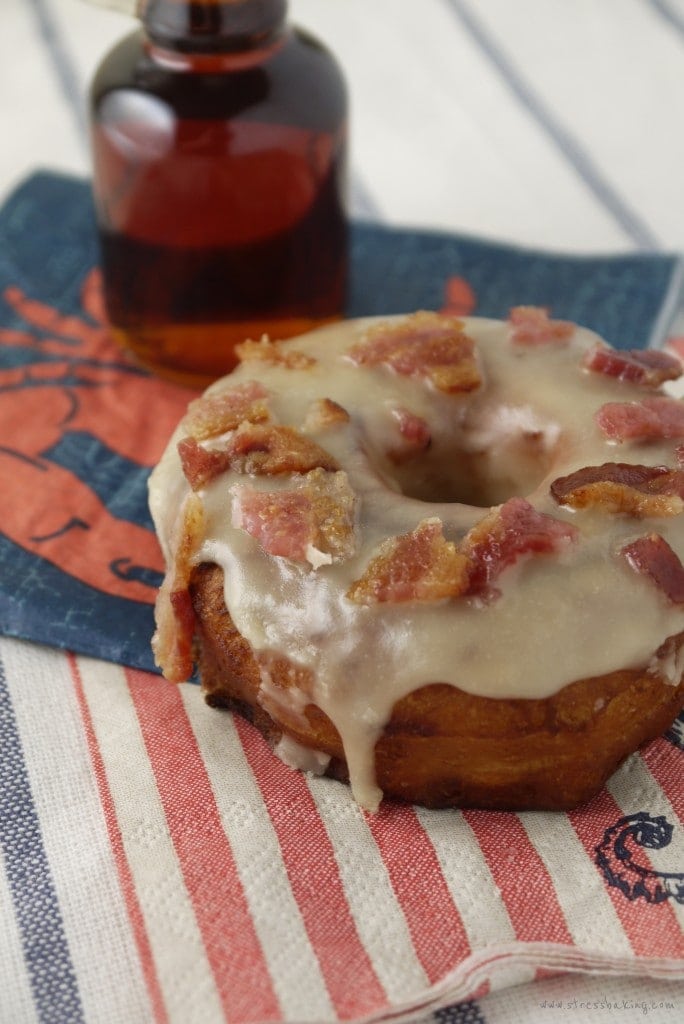 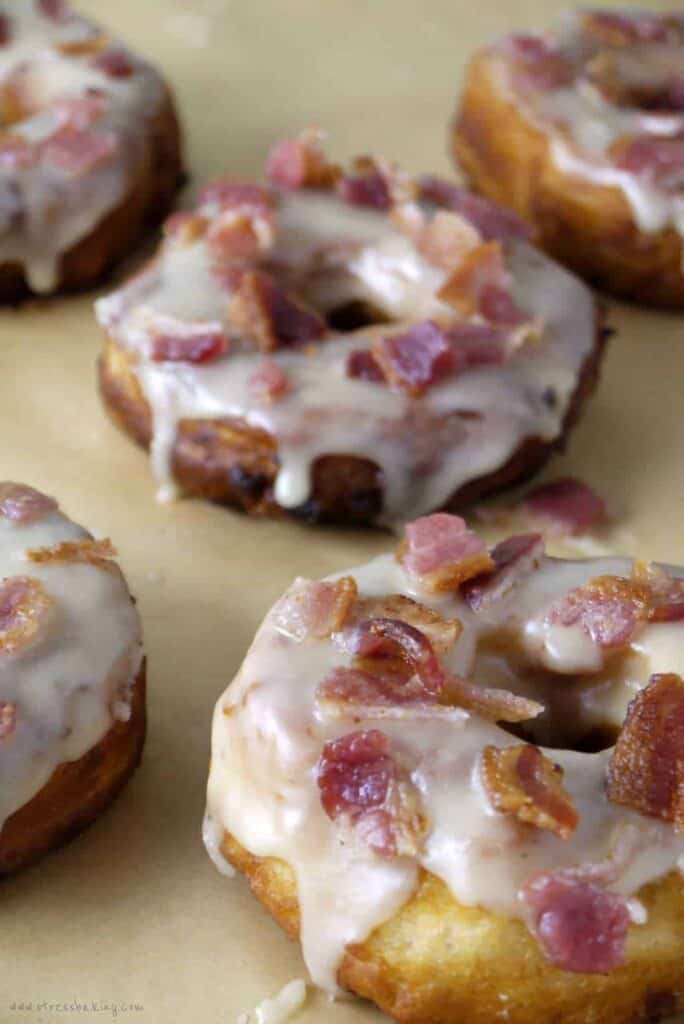 Of course you are! Now go make them and spread the maple-y bacon-y joy. 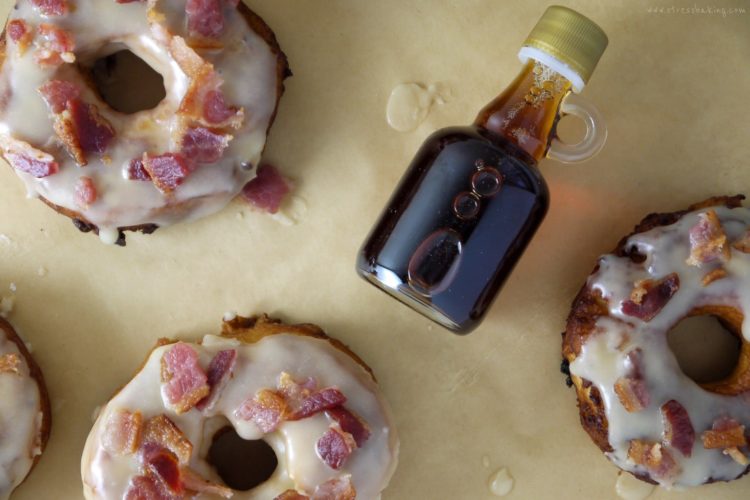 Hi there! I’m Leslie. I use baking as an outlet for relieving stress and anxiety. I’m self-taught, and always seeking recipe inspiration so I can provide you with easy to follow homemade recipes. About Leslie >>