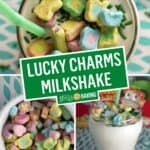 Who says you can’t have breakfast for dessert? Swap milk for ice cream to turn your Lucky Charms cereal into a milkshake for an after-dinner treat!

The story behind the recipe

If you’d like to skip this, jump straight to the recipe!

When I was a kid, one of my favorite things to do was stay with my aunt and uncle in Kentucky. I would walk the trails through the woods with their dog to lead the way. I would ride my extremely dangerous Roller Racer scooter down their extremely steep driveway at extremely high speeds (I kind of can’t believe they let me do that).

But out of everything I did, my favorite thing to do was eat breakfast with my uncle.

We’re both early risers and I’d always find him sitting at the kitchen table reading when I wandered in, half awake and still rubbing the sleep out of my eyes. As soon as I walked in the room, he’d jump up and say, “Well, good morning, darling – looks like it’s time for breakfast!”

He would open the corner cabinet and spin the lazy susan that sits inside to expose the multitude of cereal options. There would be simple cereals and loaded cereals, everything from Raisin Bran to Lucky Charms. Each one would be in its own individual mason jar, neatly organized and easy to see.

And then there were some that would have multiple cereals combined into one jar and those were always my favorite – mixes of Kix, Cheerios and Frosted Mini Wheats. Apple Jacks, Corn Chex and Cocoa Puffs.

I KNOW. Anarchy, I tell you.

What made it all come together was the milk. This is no ordinary milk, my friends. This was magical milk. My uncle stored milk for me in a square Tupperware container in the freezer.

He would put it in there when he got up in the morning so that it would be slushy by the time I woke up. He’d fill a bowl with my cereal of choice and then pour my slushy milk over it. He’d mix it all together with a spoon and then hand it over for me to inhale.

It was my favorite part of the day.

I’ve been feeling pretty nostalgic lately, so the last time I went to the store I bought a box each of Corn Chex, Kix, and Lucky Charms so that I could mix them all together like old times (in even proportions, thank you very much).

I’d been eating those for a couple of weeks before I ran out of everything except Lucky Charms – I hadn’t noticed that it was a larger box than the others, so I had enough for a few more bowls.

One Saturday morning, I put a container of milk in the freezer when I woke up, and then got ready for the day. Took a shower, got dressed, did the dishes, returned some phone calls, shoveled off the deck, made lunch, did some laundry, got the mail, paid a few bills, checked my email… and suddenly it was 5PM.

I had completely forgotten about breakfast. I grabbed the milk out of the freezer and it was sufficiently frozen. Not slushy… frozen. I chipped away at it for a while and got it into more of a chunky state, which frankly wasn’t very appealing. I let it sit for a bit thinking it would get to an acceptable slushy state, but it was just kind of grainy and not what I was looking for in life.

So, I poured normal, non-magical milk from the fridge over my bowl of cereal and ate it with a pout on my face.

Since I’m a crazy person that can’t sit still, I was pacing around the kitchen while I ate. I wandered into the pantry and started making mental notes of everything I needed from the store. Then I moved onto the fridge and freezer and noticed I had almost nothing in the fridge aside from some frozen berries and vanilla ice cream.

I started thinking – how would Lucky Charms taste with ice cream? The jump from ice-cold milk to ice cream isn’t that far.

I finished my bowl and then decided to get crazy – instead of pouring milk in my bowl, I added a couple scoops of ice cream and poured the rest of my Lucky Charms on top. I stirred everything together with my spoon and was pleasantly surprised with the result.

It was… good. Like, really good. I decided I needed to make it official by turning it into a milkshake.

I ground them up into smaller chunks and then combined those with ice cream in a blender (aff link). I like my milkshakes thick, so I don’t add any extra milk or ice to mine.

I poured it into the special glass that I always drank out of with my uncle, dropped a handful of whole marshmallows on top with some sprinkles and voila! A Lucky Charms milkshake.

If you want to celebrate St. Patrick’s Day and aren’t feeling particularly inclined to get wasted on a Tuesday, whip up one of these bad boys and curl up with something Irish-themed on Netflix. Like The Boondock Saints.

What can I say? I live in Massachusetts, so that is the default out here. 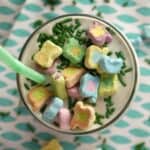