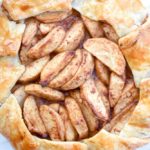 I feel obligated to warn you that the recipe you’re going to see in this post is intended for up to six people, and my husband and I ate it in a single sitting because it was so freaking good. I would say that I’m sorry that I didn’t have any leftovers to share with my coworkers, but I’m really not even a little bit sorry.

It’s just… it’s so good. And it’s so easy. Even the crust is pretty easy (mostly because I left the hard work to the experts).

So, yeah. Just wanted to make sure you know what you’re getting into, because I don’t have much self control and if you don’t either… well, I can relate. Just know that if you do the same, there will be zero judgment from over here.

The great ghee debate for paleo

I love my apple pastries. Apple strudel, apple pie, apple turnovers, and apple galettes. I’m not giving them up. You can’t make me.

I’m one of the types who is okay with using butter or ghee (in moderation) and still considers it paleo. I’m not sitting down with a tub of butter and a ladle to shove it in my face, so using it in pastry crust isn’t against my paleo regimen.

Some of you may disagree with that, and that’s completely okay because you are a much better and stronger person than me. I just can’t give it up, man. I can’t. YOU CAN’T MAKE ME.

So that’s my disclaimer – this recipe includes some butter in the crust, so if you can’t roll with that (get it? because dough?) feel free to bid me farewell and I’ll see you around the interwebs.

If you’re not paleo — but still gluten free and just getting used to it — using a boxed gluten free pie crust mix made my life a lot easier. Until I’ve perfected my own crust recipe, I have no shame in continuing to use it.

It is a bit more delicate than normal pie crust that includes gluten, so while you don’t have to worry about kneading it too much and it becoming tough, you have to be more concerned with it breaking when you go to roll it and fold it. So, use a light touch and everything will be juuuuuuuuuust fine.

But if you are paleo, I love this easy recipe for a paleo pie crust.

Getting a golden pie crust

I like a nice deep golden sheen on my crust, so I opt for the pure egg yolk wash method. You can feel free to do whatever you want, that’s just my personal preference.

Just lightly whisk an egg yolk and use a pastry brush to coast the top of the crust.

Look at it, all fresh out of the oven. Look and that color. Look at that bubbly cinnamon filling:

I’m not a big proponent of the perfectly layered apples in my galettes.

I make galettes because they’re easier than pies, so let’s not add more steps or time to the process.

And now, we’re going to add a maple drizzle. Don’t worry though, we’re not talking powdered sugar and maple extract.

We’re talking soaked cashews, real maple syrup (the GOOD stuff, people – I’m in New England, don’t insult me), vanilla extract and a pinch of salt – you can also add maple extract if you want to make the flavor more pronounced.

Personally, I enjoy the slightly nutty flavor you get from the cashews. Give it a shot, taste it, see how you feel, and then add the extract if you still feel like you need it.

And I just had to include this next shot because I laughed out loud when I found it during my editing. I was shooting these photos on my balcony because the lighting was good, and… well, it appears I had a fan of my work that joined in.

Okay, I’m just gonna be real with you and tell you to go ahead and make two because resistance is futile. Experiment with different apples and the flavors of the maple icing, and then whip this up as the perfect dessert for a holiday gathering.

This apple galette perfectly imperfect, and that’s what I love about it.

Now go make this and try not to eat the entire thing in one sitting like we did. That’s a real, genuine challenge. 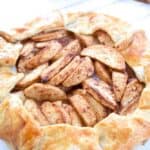 Prep Tip: If you can, roll out your dough onto the baking sheet you’re going to use and prep it on there. This way so that you don’t have to worry about moving the galette and it cracking or falling apart! Storing extra maple icing: Keep extra icing in an airtight container in the fridge for up to a week. It’s delicious on ice cream, pancakes, french toast – the list goes on and on! Non-paleo (but gluten free) pie crust: Try a 16 ounce bag of Bob’s Red Mill Gluten Free Pie Crust Mix.