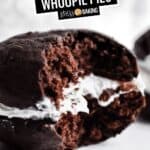 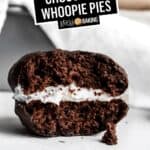 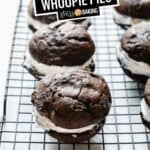 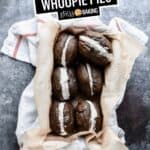 My whoopie pie recipe has a sweet marshmallow filling sandwiched between rich chocolate cake for a classic New England dessert – but without the shortening! Ready in less than 30 minutes, and perfectly paired with a cold glass of milk, a White Chocolate Mocha, or a Honey Vanilla Latte.

Whoopie pies are a New England staple – specifically Maine. But it’s one of those desserts that’s on the counter in every single cafe in the Northeast.

If you’ve never had a whoopie pie, think of them as little chocolate cake hamburgers. Maybe I’ll start a petition to rename them as such – who’s with me?

That’s right, I said controversy. Over a dessert.

Maine, New Hampshire, Massachusetts, Pennsylvania and Virginia all claim to be the birthplace of the original whoopie pie! A company or family in each state claims they were the first to start making them in the 1920s, but since the paper trail on any of that is slim-to-none, there’s not really a definitive answer.

There was a cookbook published in the 1930s by the company that originally made Marshmallow Fluff and they use Fluff in the recipe – so that’s a pretty solid argument for Massachusetts as the origin (since it’s a company in Lynn, MA).

The components of a whoopie pie

The name is not only silly-sounding, but also deceiving. They’re not pies at all – they’re actually cakes with a marshmallow creme frosting in the center. Another argument for me to have them renamed Little Chocolate Cake Hamburgers – just sayin’.

Whoopie pie filling is also traditionally (and famously, I might add) made with shortening. I’m not a huge fan of using shortening in general, and since I know there are other people who feel the same way, I wanted to make a version that was shortening-free!

I was so eager to get this recipe photographed (and eaten) that I 100% forgot to take process shots. Pretty sure I remembered right around the time I was biting into my second whoopie pie (you know, for taste testing purposes).

[facepalm]  I’ll make them again soon and get those updated here for you, I swear.

Until then, it’s thankfully a pretty straightforward process.

These are really rich, and really filling – so you don’t have to worry too much about devouring the whole batch in one sitting. If you did… well, I’d like to meet you and shake your hand after you’ve slept it off.

If you taste the chocolate cakes on their own, it might seem underwhelming. And if you taste the filling on its own, you might think it’s too sweet (or not sweet enough, depending on your tastes). But if you put the two together… it’s some sort of sugary magic.

How to store whoopie pies

Wrap each one in plastic wrap, stick them in an airtight container, and store them in the fridge for up to a week. The plastic wrap keeps them individually wrapped so they’re easy to grab and go, but also keeps them from sticking together.

I also find that storing them in the fridge makes them easier to eat because the filling doesn’t squish out the sides as much as it would at room temperature.

When you’re ready to eat them, let them sit out on the counter for about 15 minutes first and then go to town.

Word to the wise: Make sure you’ve got a mirror, a napkin, and a toothbrush handy.

If not, everyone will know you’ve just devoured a whoopie pie by the chocolate cake in your teeth and the marshmallow creme on your face… but it’s totally worth it. 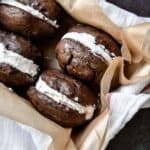