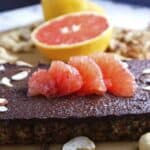 Here’s the thing about today’s recipe: I have it classified as dessert, but you might as well eat it for breakfast. It’s full of nuts, dates, honey, coconut oil, and grapefruit juice. And if it has grapefruit juice, then it’s basically breakfast. Right? Right.

There are more words in the title than steps in the recipe, so don’t let the name scare you. I know some people see words like “raw” or “gluten free” in recipes and immediately think that means “bland”. Believe me – that is not the case here.

It’s so rich and decadent that it’s hard to believe there’s no refined sugar or dairy. I brought it into the office and people lost their damn minds. One woman almost buckled at the knees when she took a bite and then falsely blamed me for ruining her diet.

After I told her what was in it, she gawked at me for a minute before stealing two more slices and running back to her desk.

One of my secret weapons is honey. HONEY GOES WITH EVERYTHING. I put it in baked goods, on toast, in coffee (you heard me)… everything. For the crust, it works with the dates to play the part of the adhesive to hold all the nuts together.

It also adds the perfect amount of sweetness to the filling to offset the strong, sour flavor of grapefruit – but frankly, I’d be fine leaving it out of the filling altogether to really let the grapefruit flavor shine.

My other secret is the magical cashew. Until the last year or so, I had no idea how versatile cashews can be. They make an amazing substitute for heavy cream (as long as you plan ahead and soak them in water overnight), and that makes them my new best friend as I try to fit into last summer’s bikini.

Now let’s talk about the crust for a second.

It’s no bake, which also means it’s not crispy or crunchy – it’s more sticky and moist. It holds together wonderfully and is the perfect accompaniment to the chocolate filling.

But just know that we’re not talking about a graham cracker crust here – it’s raw. And so freaking good.

So long story short, if you’re looking for a raw dessert that’s low effort (as long as you’ve got time to spare to let the cashews soak and to chill the completed tart), this is the one. You won’t be disappointed! 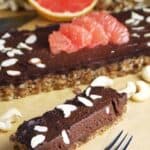 Easily made vegan by swapping honey for maple syrup or agave!