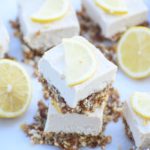 I’ve been on a real lemon kick lately. Cookies, pies, sorbets, straight up lemon slices in my face. I blame it on the last surge of summer blasting through my veins.

I’d been wanting to make lemon bars for quite a while, but the idea of using so much butter made me feel a bit queasy. Then I decided I wanted make lemon cheesecake instead, but the idea of that much cream cheese and sugar made my stomach equally as unsettled.

Eventually, I just gave up on it and made chocolate beet cake instead… the obvious choice of substitute.

Finding a new use for an easy nut crust

Recently I got the urge to make my raw grapefruit tart and it dawned on me that I could totally reuse the nut crust for something light and summery (even though I’m chompin’ at the bit for Fall).

So, I made an 8×8 pan’s worth of the crust and then stood in my kitchen staring at it. I figured at some point it would get tired of me staring at it and would suddenly manifest itself into some genius concoction.

Instead of continuing to stare and wish for food, I started rooting around the pantry and the fridge. We had an abundance of lemons, and I found the bag of cashews I’d bought with the intention of making a cashew cream pie (stay tuned on that one), and I also found a can of coconut cream in the fridge that was intended for whipped cream.

Why not combine the two for a creamy bar filling? And why not add lemon? Lemon juice, lemon zest and maybe even some lemon emulsion.

Should they stay in the freezer?

Thankfully, it turned out to be a pretty fantastic idea. I made the mistake of putting them in the freezer to set and then trying to eat them right away. Letting them sit out for about half an hour gave them a nice creamy consistency, but it was also sort of… melty.

And lackluster in flavor. Not because it needed more “oomph”, but because the iciness of being in the freezer was too distracting to the taste buds.

Set in the freezer, store in the fridge

I found that the right combination for these raw lemon cheesecake bars is to freeze them until set and then put them in the fridge until ready to serve.

It gives them this perfectly creamy, appropriately flavorful, cheesecake-esque mouth feel. It’s precisely what I want in a dessert that’s surprisingly healthy.

So the tl;dr is that you want to make sure you’re planning ahead for this recipe, but the recipe itself is super easy. Throw stuff in a food processor and let it set kind of easy.

Even better, it holds up wonderfully in the fridge. This isn’t one of those things that you make and then have to eat the same day because it gets mushy and gross. No, sir. It’s just as delicious on day five – if not more!

Nothing is perfect, so I will say this about this recipe: the crust makes sort of a mess. I don’t like to add a ton of sweetener just for the sake of holding it together, so I let it be a little bit crumbly and eat it with a fork or spoon.

Or just shove it in your mouth and let the crumbly mess all over your shirt be damned. I’m certainly not going to judge you, and if other people do… well, you don’t need that kind of negativity in your life.

How to serve lemon cheesecake bars

I love serving mine with fresh, thinly sliced lemons on top. Sometimes I eat them as is, and other times I like to squeeze them on top of the bar for a little somethin’ somethin’.

You could also substitute lemon zest, candied lemon slices, or nothing at all! They’re going to be delicious no matter what :) 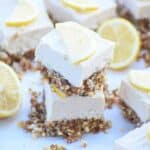 Store, covered tightly, in the fridge until ready to be served.