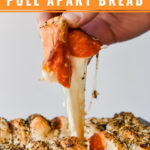 Canned biscuits are dressed up with pizza toppings for an easy, cheesy pull apart bread appetizer for a group! 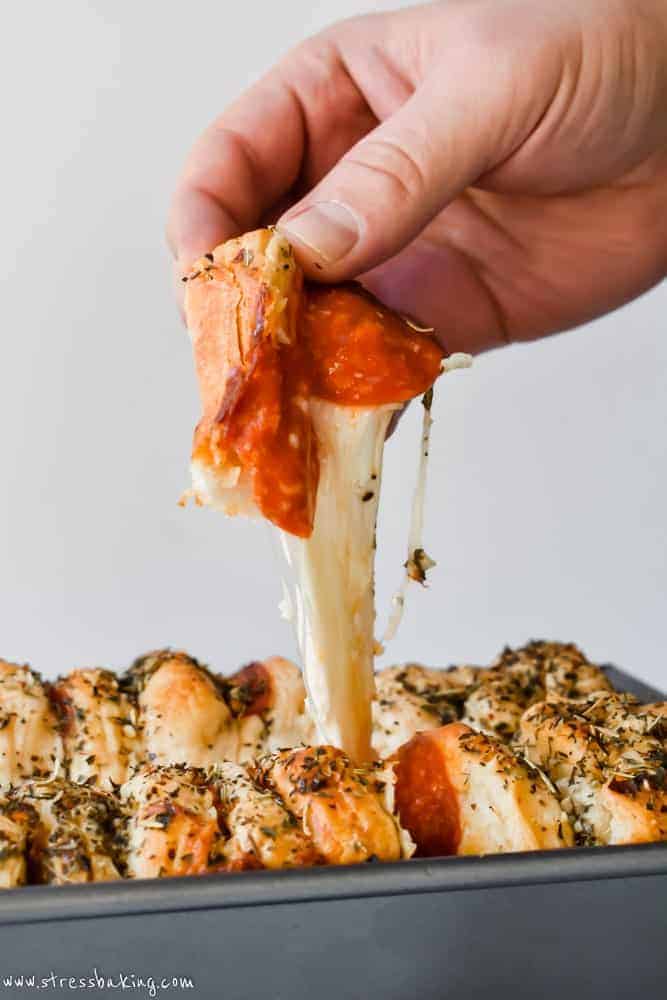 I know things have been a little quiet around the blog home front lately, but I can explain: there are just not enough hours in the day! Anyone else aware of this problem? I’d like to start a petition, or a GoFundMe, or… something. Need. More. Hours.

I had two back to back work trips the last two weeks that took me to San Francisco and New Orleans, and because some god awful weather in Boston (the entire state was a solid sheet of ice, I swear), the government shutdown and lack of staffing at the airports, it was… well, it was an ordeal. Flights dramatically delayed or canceled, waiting on the runway for hours at a time because of the backlog of aircraft trying to take off, just a nightmare for so many people. 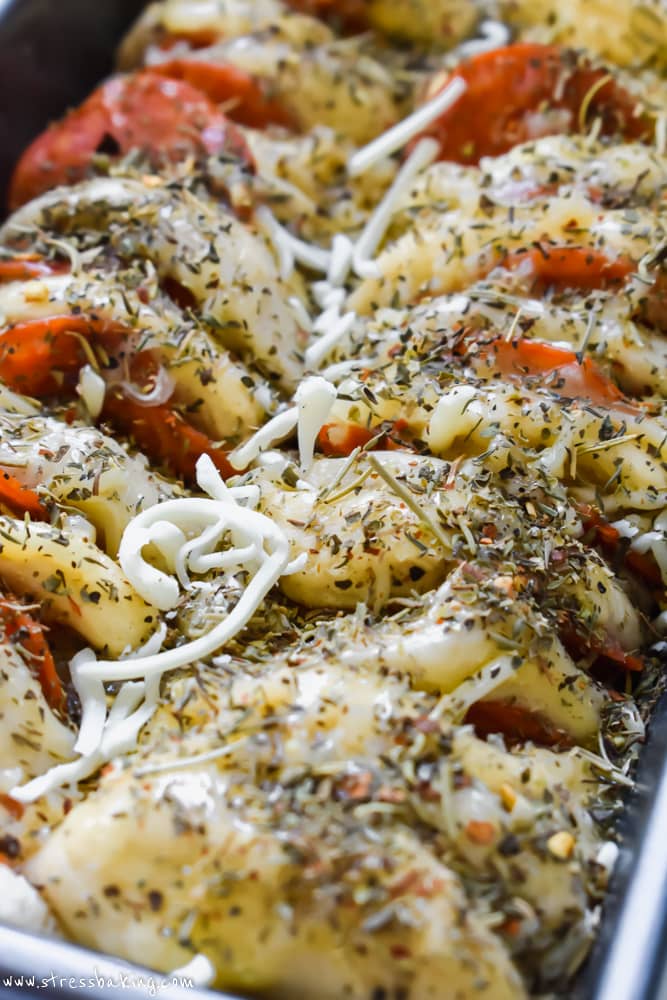 The good news is I had a good time, saw a bunch of friends, met and bonded with my new coworkers, and ate a crapload of good food in both locations. A few recommendations: 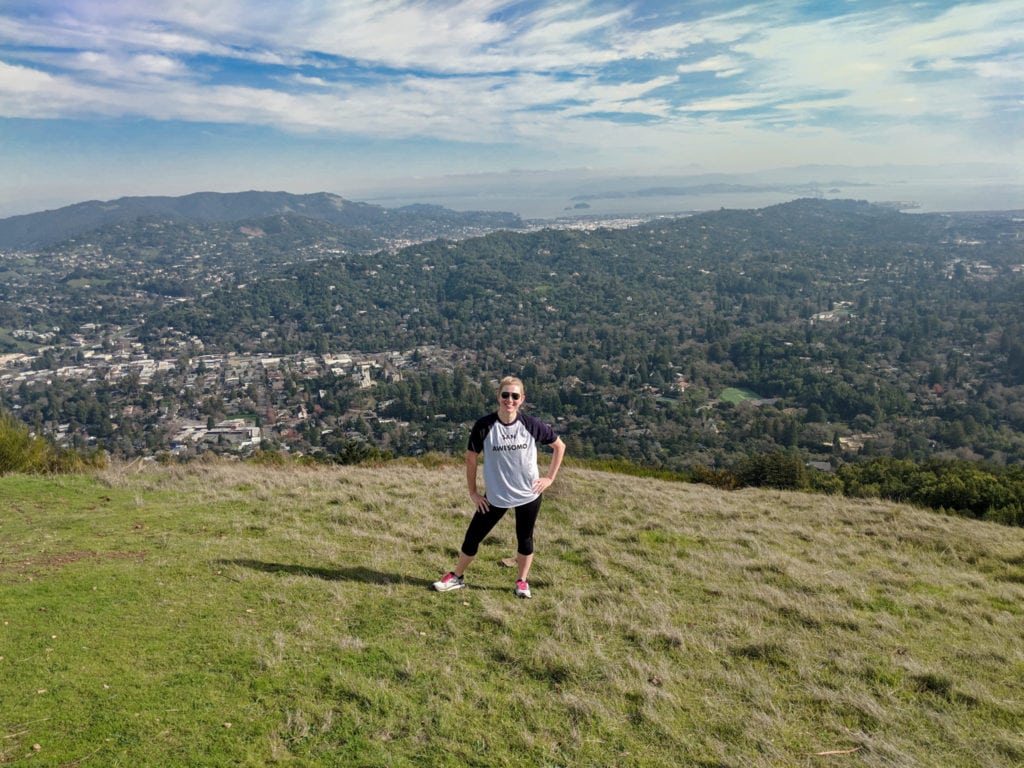 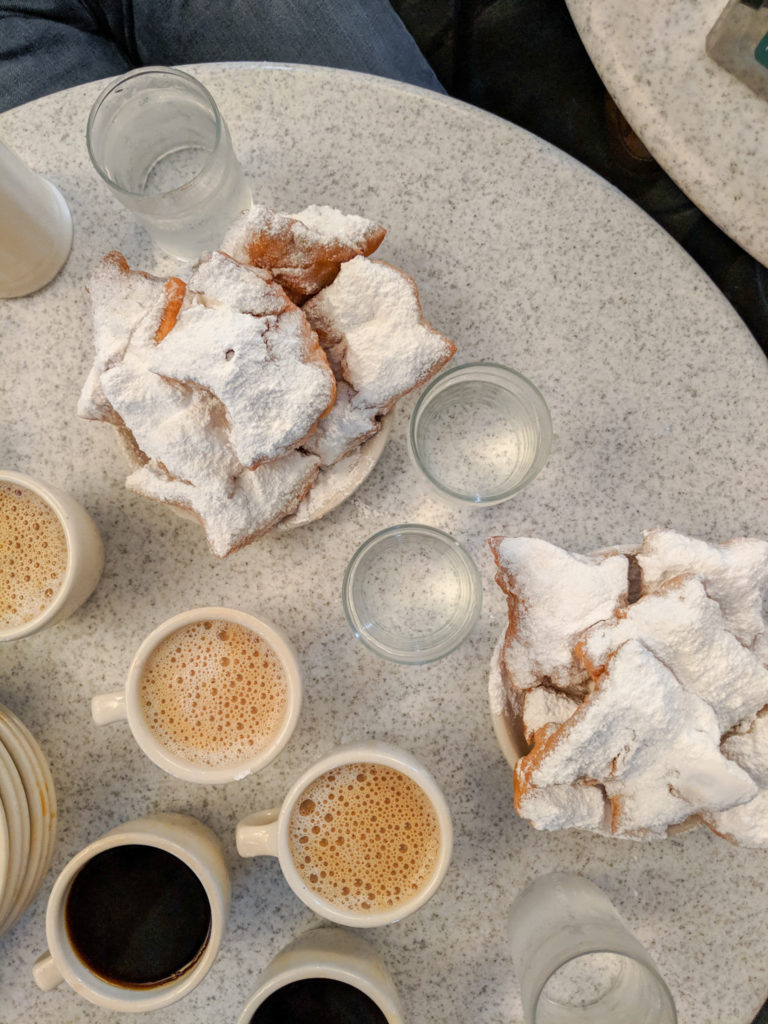 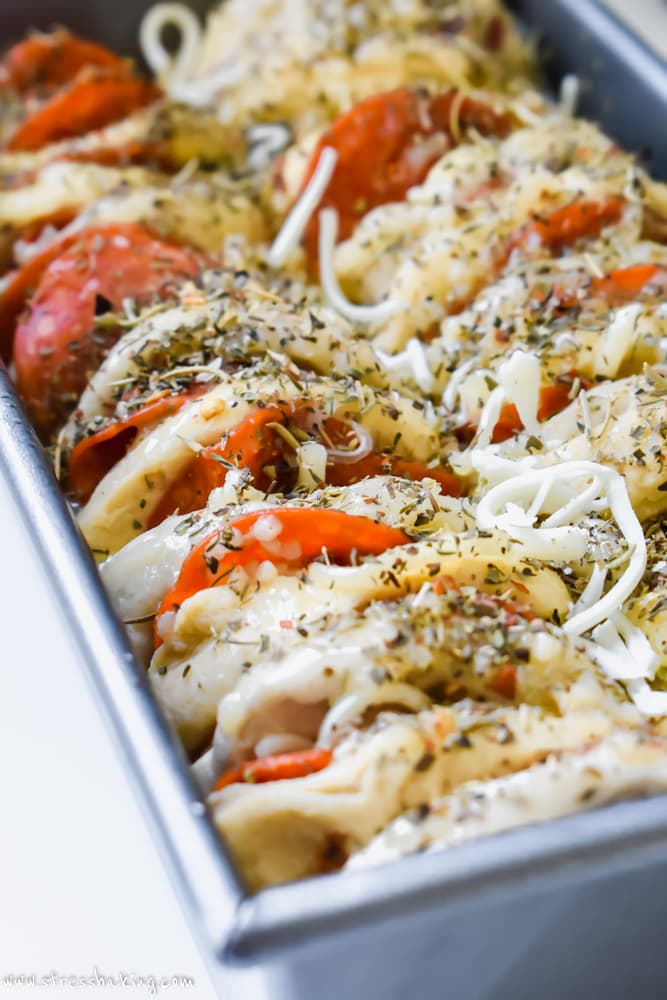 Aaaaaanyway. Now I’m back in Massachusetts and the Super Bowl is all anyone here is talking about… again.

Having grown up in Chicago, I’m a die hard Bears fan so I’m ambivalent about the Patriots and their billionth Super Bowl appearance. But that doesn’t mean we can’t have a Super Bowl party anyway! It’s all about the commercials for me at this point. 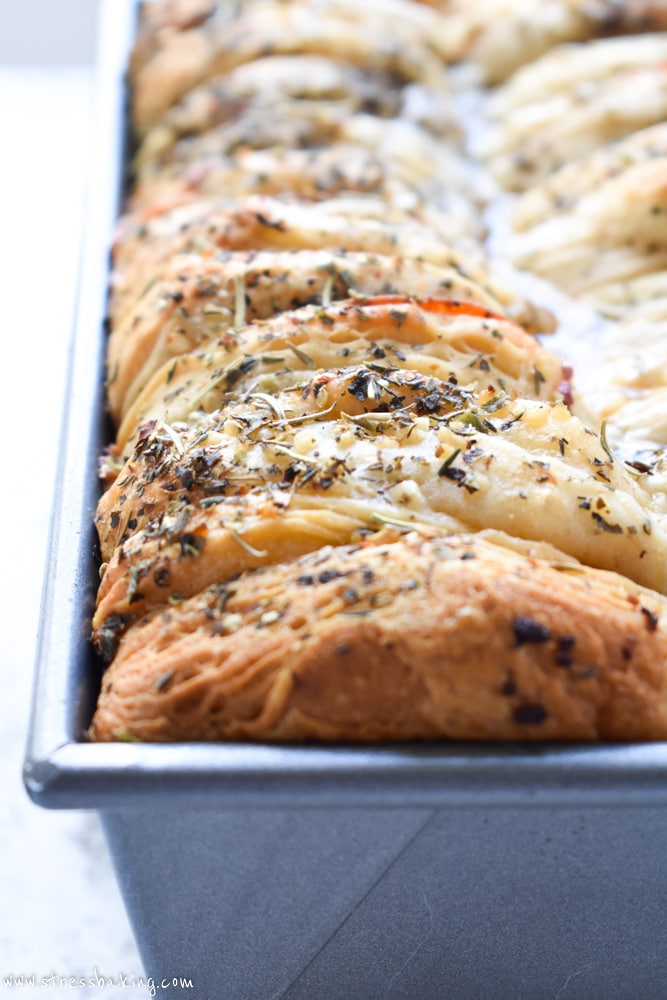 I’ve been wanting to make a pizza pull apart bread as a Super Bowl app for the longest time. I finally got around to doing it after all these trips were over, and I’m so glad I did.

I made mine a little bit differently than I’ll instruct you in the recipe card below – the fiance likes things more doughy than normal human beings, and since he likes his cinnamon rolls half baked I knew he’s be okay with under baked biscuit dough, too. I also added way more cheese than any normal human being should consume. I like to live on the edge. 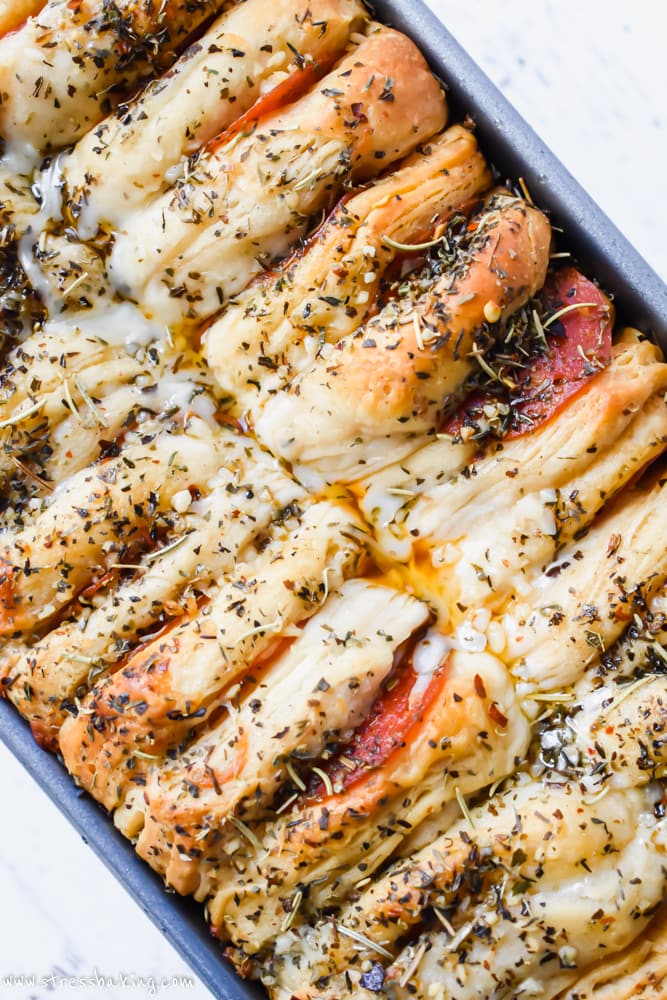 The keys to nice nice crispy, golden tops and soft, cheesy centers (with a killer cheese pull) are:

You can sprinkle your homemade Italian seasoning on each dough round while you’re assembling everything, or you can just sprinkle it on top. Totally up to you. 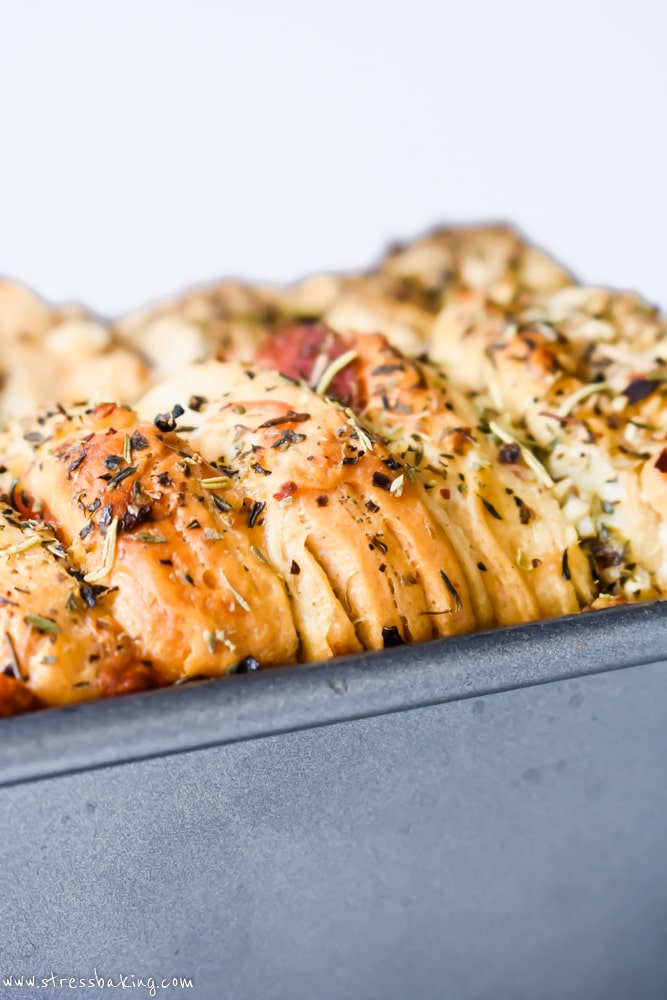 I highly recommend loading it up with as much pepperoni as you can manage.

Now if you’re like Bill and you like things a little doughier, bake it for a little less time and leave it uncovered for more of the baking time than I recommend. Serve with marinara sauce if you want, or just keep your eyes focused on the Super Bowl commercials and blindly reach for another slice of this cheesy goodness. 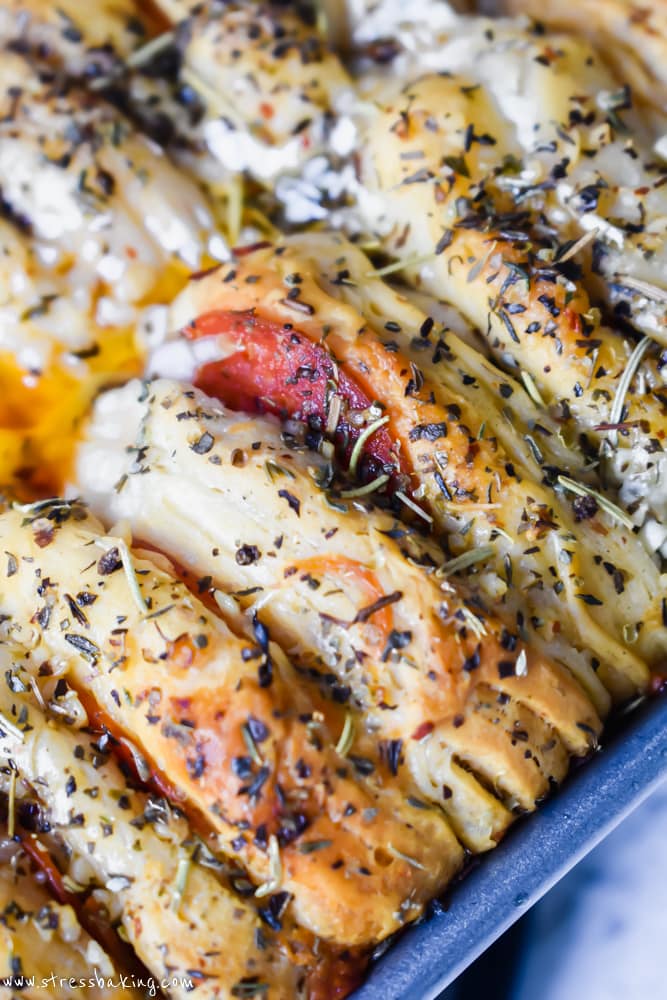 Apologies in advance if things continue to be a bit quiet around here for the next couple weeks – the wedding is in less than two weeks, and even though we’re not taking a honeymoon,  I want to sign off and really enjoy being disconnected and spending time together as newlyweds.  Next time you see me, I’ll have a new last name, an additional ring, and… well, everything else will be the same. Wish us luck!

After you’ve made this recipe, please leave a comment below with a rating – and if you came from Pinterest, add a photo of what you make to the pin to share your experience!

Canned biscuits are dressed up with pizza toppings for an easy, cheesy pull apart bread appetizer for a group!

My Top 10 Favorite Soups for Winter
← Previous
No Bake Cookie Overnight Oats
Next →
Let us know what you think!Click here to cancel reply.

GIMME. THAT. BREAD. Cheesy + bread + eating with your hands is basically the best combination ever, right? I know my kids will love this, but so will I!

OMG this looks heavenly, I am so making this as soon as my daughter comes home for a weekend.

Oh man, I feel ya on the work and not-enough-hours-in-the-day front. Someone should really do something about that whole 24 hours in a day business... but the pull apart pizza bread looks amazing!

I really want to have some of these delicious looking pull apart bread right now! That close-up shot of cheese pull is sooo tempting me to shove the whole thing in my mouth. So so good!

I am so making these cheesy pizza pull aparts! That cheese pull is drawing me in! This is one of those easy and so beyond delicious recipes! Entire family will love it!