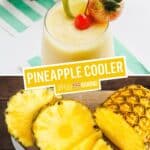 The pineapple cooler is a creamy, boozy beverage is perfect for a hot summer day and loaded with pineapple flavor (and rum, of course)! Try a tequila sunrise or salty dog cocktail next.

Guys, it’s summer. I know that the calendar says it’s not until Thursday the 21st, but Massachusetts has never been one to… oh, I don’t know, pay attention in the least to where seasons actually fall.

It was 85° yesterday, and today it’s going to be the same, and if it started snowing tomorrow, there’s no part of me that would be surprised at this point.

Speaking of yesterday’s weather, I ran around like a bunny in it! Okay, maybe not so much like a bunny because I had a path I had to follow and some semblance of direction in life.

It was the Spectacle Island 5K which is a beautiful Boston Harbor Island and it’s becoming an annual tradition for Bill and I to participate. Last year I just photographed him because it was his first race ever (!), and this year I ran with him.

He’s faster than I am, so finished well before me and grabbed a few shots when I was crossing the finish line:

What I’ve learned, is that evidently I am a descendant of hover cat and my feet never actually touch the ground. So why do my feet hurt so much?!

My uterus has been a real moody jackass for the last week, so the fact that I was able to run this at all was a small miracle for me. AND I finished 58 seconds shy  of my personal best.

I have no idea how that is possible, because if you look at a picture of Spectacle Island, you’ll notice that it’s a bunch of hills. And I hate hills. And my uterus also hates hills.

So to honor my completion of the race and the unofficial start of summer here in the Bay State, today’s recipe is bright and sunshine-y – much like my lemon poppyseed dressing recipe (which p.s.: you guys have fallen in love with it and it makes my heart sing).

These pineapple coolers are also full of booze, which is important for a good summer cocktail. Say what you will about alcohol and dehydration in summer heat, but… well, okay, yeah, that’s a real thing.

So don’t go nuts and chug six of these, but sip and enjoy while you sit on your porch, basking in the sun. Like a lizard. If lizards drank booze.

There’s no rule that says you have to garnish this with anything. Not a damn thing, if you don’t want to. But I’m all about adding fruit to my drinks because 1) that gives it more color and makes me feel fancy, and 2) it’s food, and I like food.

You know those crazyass milkshakes that they “garnish” them with something like a strip of bacon, a donut, and an entire ice cream sandwich?

That’s using the term garnish extremely loosely. So I don’t (usually) go that crazy with it, but I do love me some maraschino cherries. I’d eat an entire container of those in one sitting if it were socially acceptable.

You can even add a straw if you want to be fancy schmancy. Or if you just like to drink out of straws.

Aside from advising you to make these immediately, I really don’t have much else to say about them.

Pineapple not your thing?

Well then why are you here?! Just kidding – thanks for sticking around. But if pineapple’s not your favorite, here are some other options for your summer indulgence: 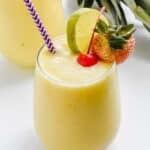 Tip: Taste a piece of pineapple before making the drinks. If you find that the pineapple isn’t very sweet, then you’ll know ahead of time that you may want to add a sweetener.