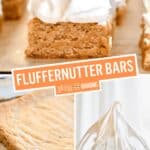 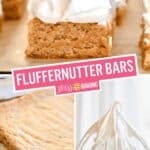 These fluffernutter bars were born from a craving for peanut butter and fluff. I would have just made a sandwich, but I was stuck at home during one of our bagillion nor’easters this year and we ran out.

I KNOW. Cardinal rule of an upcoming storm: cause a stampede at the grocery store and buy all the milk and bread, even if you don’t eat bread or need milk. Me? I stock up on wine and chocolate. Priorities.

So then I was going to make my fan favorite fluffernutter cookies, but I wanted more fluff. I finally decided that I would try my hand at peanut butter bars and go from there.

Thankfully, that experiment went pretty damn well because the bars came out exactly the way I wanted them to! Soft, but not cakey. Chewy, but not overly dense. And most importantly, full of peanut buttery flavor.

I have this habit of cutting off the edges of brownies and bars while they’re cooling, and I do it for two reasons: to taste test and to even out the bars themselves. You know how you end up with curved corner pieces and something the edges will be raised on the perimeter?

Yeah, I just cut those off and eat them. Everything is evened out and I get a snack. Win win.

While the bars cooled, I did some online searching for marshmallow frostings. I didn’t have any jars of Fluff on hand (which is actually kind of shocking), so I needed to make my own.

My plan was to reuse the recipe for my s’mores cupcakes which is perfectly delicious, but I didn’t have enough granulated since the bars themselves used up what I had around the house.

Guys… being stuck inside during nor’easters is the worst.

Rather than trying to reinvent the wheel and potentially wasting ingredients on failed batches, I went with this marshmallow recipe from Deliciously Organic.

It’s even paleo if you want to use it for other recipes that you want to be 100% paleo! Because this recipe? This is most definitely not paleo.

We’re using butter and sugars and peanut butter, which on its own isn’t paleo because peanuts aren’t nuts, they’re legumes – and those are off limits for a paleo diet.

Did you know that? I didn’t, until I really got into paleo baking and cooking. If you didn’t know that either, consider this your fun fact of the day! You’re welcome.

Okay, so about that marshmallow frosting… it’s perfect for this.

It’s stiff enough that you can layer it sky high on top of the peanut butter bars, which is of course what I did.

If you want a thinner layer, that’s fine, too… I suppose. You could make two batches of bars to frost with it, or you can store it in an airtight container in the fridge.

When you want to use it again, just whip it back into shape (it will separate as it settles).

The combination of this frosting and these bars are fluffernutter perfection. I love it so much.

The bars can easily stand on their own though – so if you wanted to leave them naked, you’ll be just fine. Or you could top them with something else – maybe my mascarpone whipped cream, or cookie butter frosting, or just a hearty drizzle of dark chocolate. You really can’t go wrong.

Still not enough fluffernutter fun for you? Try these fluffernutter cupcakes from my girl Lauren. You won’t regret it, I promise. 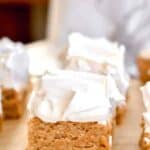 Cover and store leftover bars at room temperature for up to a week.