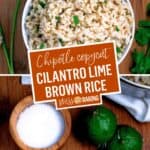 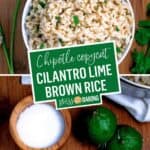 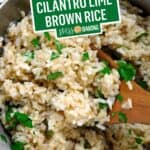 Forget Chipotle – make cilantro lime brown rice at home! Fluffy brown rice gets an upgrade with a healthy dose of lime and cilantro. Pair it with Mexican grilled corn and a strawberry basil margarita!

Recently my father asked me how I like to prepare brown rice, and it was a nice reminder of one of my favorite side dishes: Cilantro Lime Brown Rice!

It’s super easy, light in texture and goes with a seemingly endless number of meals!

Here are a few of my favorites meal pairings:

Do you love or hate cilantro?

I just love the smell of fresh cilantro. It’s refreshing and evokes the thought of summer grilling (probably because the first thing I do when the weather warms up is grill corn and slather it with cheese and cilantro).

There are some people who really, really, really hate cilantro. It was a running joke at my last job that two of the women I worked had “the cilantro disease” – they both thought cilantro tasted like soap and refused to go near any food that had cilantro on it.

For the longest time I thought they were both just being dramatic, but then I saw an article about how it’s a real thing! Did you know about this?

Apparently people who can’t stand the taste of cilantro have sensitive olfactory-receptor genes that pick up the smell of aldehyde chemicals that exist in both cilantro and soap, and thus to them cilantro tastes like soap. That’s crazy!

I’m so happy that I do not have such a sensitivity because I freaking love cilantro.

Generally speaking, yes. But largely it’s because white rice is sort of nutrient-neutral because of the processing it goes through.

Total aside: Ever wondered what it looks like behind the scenes of these food photo shoots?

Why don’t I show you, because sometimes I’m in the middle of shooting and I have this moment of, “Really, Leslie? Really?” and this was one of those moments – but to prove it’s not completely ridiculous (okay, fine – it is, but humor me), it resulted in this photo next to it.

What to serve with cilantro lime brown rice