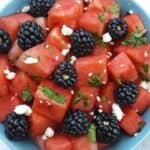 How this recipe came to be

Not in the mood for story time? Feel free to jump straight to the recipe at the bottom!

You know those hot, humid summer days when all you can bring yourself to do is take a semi-cold shower and lay down on the nearest cool surface like a dog? I had one of those recently.

I was sprawled on the kitchen floor next to my dog, Penny (who didn’t seem to mind the company) and I realized I was ridiculously hungry. My stomach was making alien noises and even Penny lifted an eyebrow as if to say, “What in the world is going on over there?”

The idea of turning on the oven was… well, not an option. So I slid myself across the kitchen floor, pried the fridge door open from the bottom, and then stared up into it like it was Narnia. There wasn’t anything pre-made that I could just grab off the shelf and eat without leaving the floor.

I let go of the door and it slowly closed as I let out a loud, exasperated sigh. Keep in mind, during all of this Penny is just lying on the floor, facing me, staring at me with a completely unimpressed look on her face.

After the door closed I realized I had a fridge full of fruit. Fresh fruit from a local farm stand.

I also had a jar full of fresh mint on the counter above me. I had all the makings for one of my favorite summer salads, but it was going to require me to peel myself off the floor and get into an upright position like a real homo sapien.

No longer could I keep Penny company and pretend to be a dog.

I finally started taking baby steps to get myself back into a functional human. I got up and grabbed the watermelon (I’d already cut it into cubes, thank god – I probably would have given up right then and there if it weren’t) and blackberries from the fridge.

Then I grabbed a handful of mint leaves and walked across the kitchen to the counter to chop them on my least favorite cutting board. I know, that’s a weird detail to include. But seriously, I hate this thing. I need a new one so badly, and I can’t find one that I really like. #bakerproblems.

I threw it all in a large mixing bowl and lightly tossed the ingredients together. Then I realized I had leftover cojita cheese in the fridge that I could add for a little saltiness, so I had to go ALL the way back to grab that (it’s all of three feet, but you need to remember I was a slug).

I tossed it with the crumbled cheese, scooped some into a more reasonably-sized bowl, grabbed a fork and sat back down on the floor to eat.

You know how I know it was a really hot and humid day? When Penny doesn’t come running over for food at her level. I’m sitting on the floor, mere feet from her face, and she didn’t even consider standing up to walk over and beg for food. THAT’S how I know it’s a hot day.

You’ve probably heard about the trick where you sprinkle a little salt on your watermelon to bring out the flavor. I know it sounds weird, but it totally works. But instead of just adding salt to this salad (which you can absolutely do, I have nothing against it) I like to add cotija cheese.

You could use feta instead, it would have the same effect – feta is just more tangy and less salty than cotija.

How to customize watermelon salad

I had something similar to this at a restaurant once where they had omitted the blackberries, but added honey – it was amazing. I didn’t add honey this time around because I wasn’t really looking to add any sweetness to the watermelon – but you certainly could.

I happened to get a watermelon that was pretty sweet to begin with, so I’d recommend tasting a piece before adding honey to it so that you don’t end up with too much sweetness – that would kill the whole point of this being refreshing! 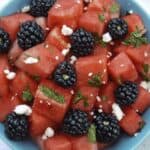