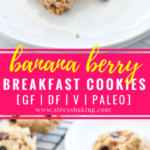 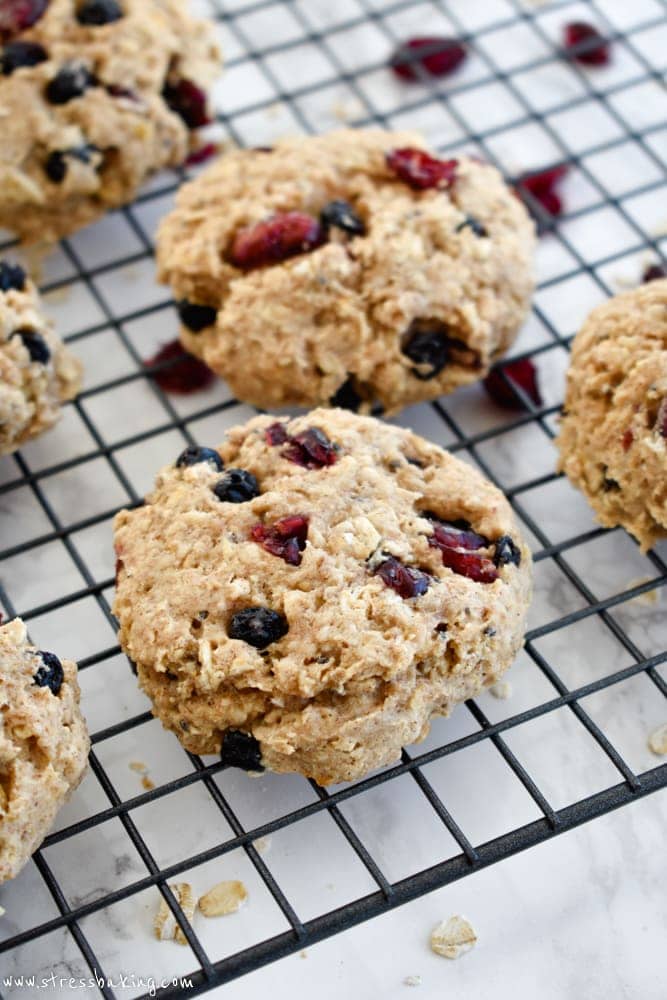 I wanted to post a new recipe during the first week of January, but unfortunately between the arctic temperatures, blizzard, more arctic temperature, and being in a house surrounded by coastal floodwaters… getting to the store for ingredients was not so much an option. 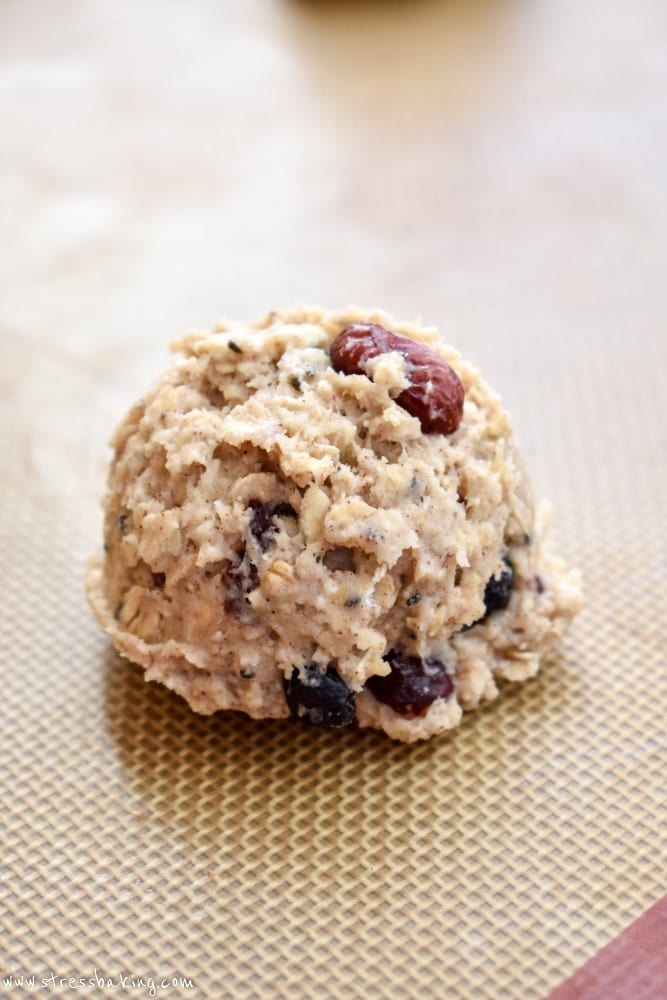 But! While I was stuck at home, I started playing that game we’ve all played at one time or another where you start making weird meals out of what you have in the pantry. It’s amazing how creative you find yourself to be during that game. You find yourself with pickles, a jar of minced onion, chicken broth and a box of Cheez-Its, and somehow you turn that into a delicious meal.

Okay, well, maybe not delicious… but you did sustain yourself, so congratulations. 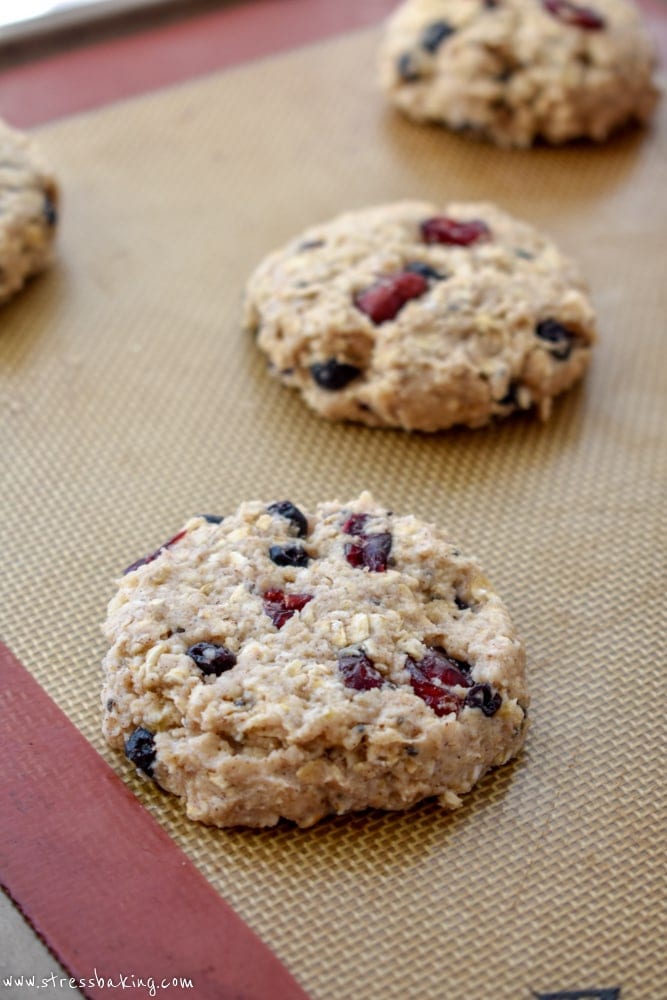 The great thing about that game is that at least half the time I manage to scrounge something together that ends up being magically delicious. 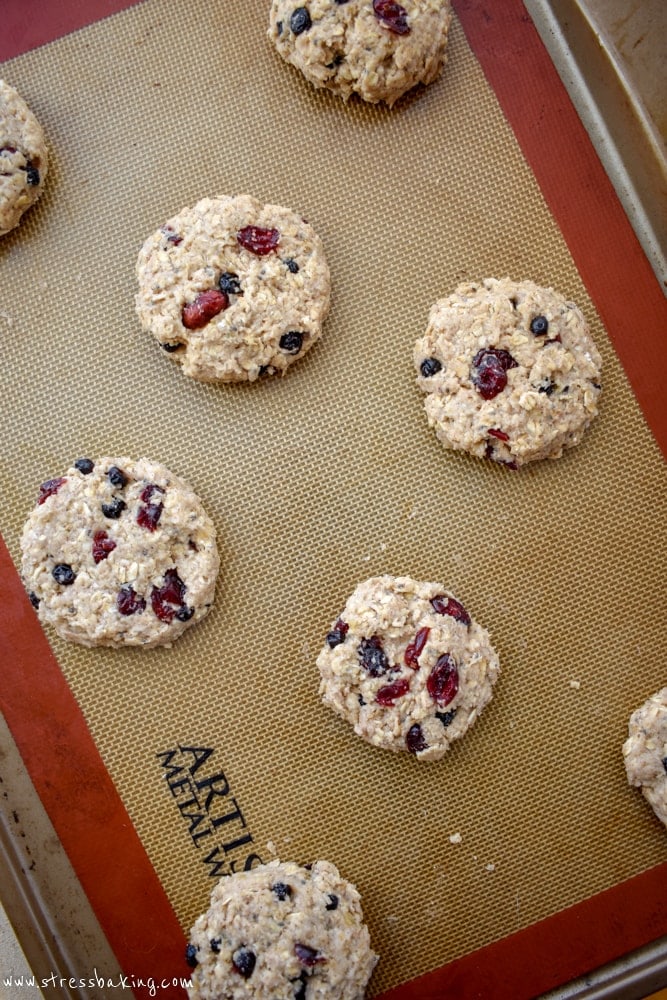 During day three of The Great Pantry Scrounging Game, I really wanted cookies. Buuuuuut it was 8AM and I’m trying so hard not to just sit down with a dessert with my morning coffee. You’d think that wouldn’t take that much willpower, but the truth of the matter is that it might be the hardest thing I do every day at this point. When I bake some schtuff and it’s still in the house (since I don’t have an office to take it all to anymore), it’s allllllll fair game for breakfast. Chocolate cake? Sure. Pecan pie? Of course. Bourbon butter pecan ice cream? YUP.

Since I left my job last month, I’ve tried to stick with my usual routine of getting up, taking a shower, making breakfast and coffee and then getting to work – but in this case, it’s on the blog and not heading out to catch the boat into the city. The one thing I can’t bring myself to do though… putting on pants. Pajama pants and yoga pants are my new uniform. When I start working again, it’s going to require some serious manpower to get me into a pair of big girl, professionally acceptable pants. Someone’s going to have to bribe me with cupcakes at the other end of the commute or something. 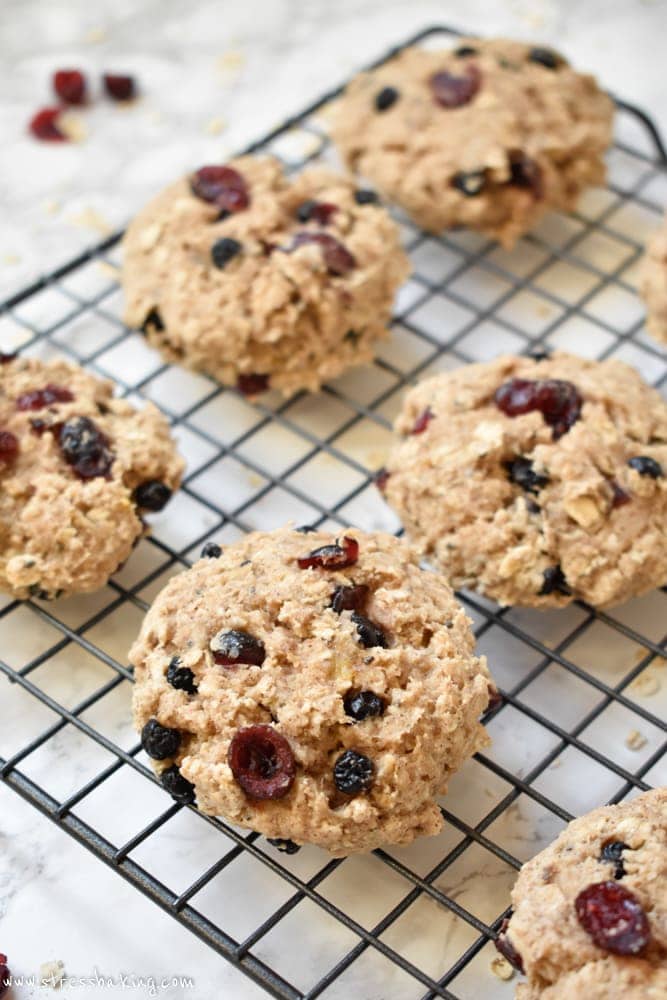 ANYWAY. I had a few bananas lying around and was staring at a few almost empty bags of dried fruit. I considered making my all time favorite banana bread, but I didn’t have any milk – plus, I still really wanted cookies. I’d been meaning to try to make some sort of breakfast cookies for a long time now, and since one of the things I was fully stocked on was Bob’s Red Mill gluten free flour (aff link) I figured now was as good a time as any!

And while I was at it, let’s make them paleo. January is the month that everyone is trying to cut back on sugar and dairy, or trying new diets – so I hope this helps someone out here satisfy their own morning cookie cravings. 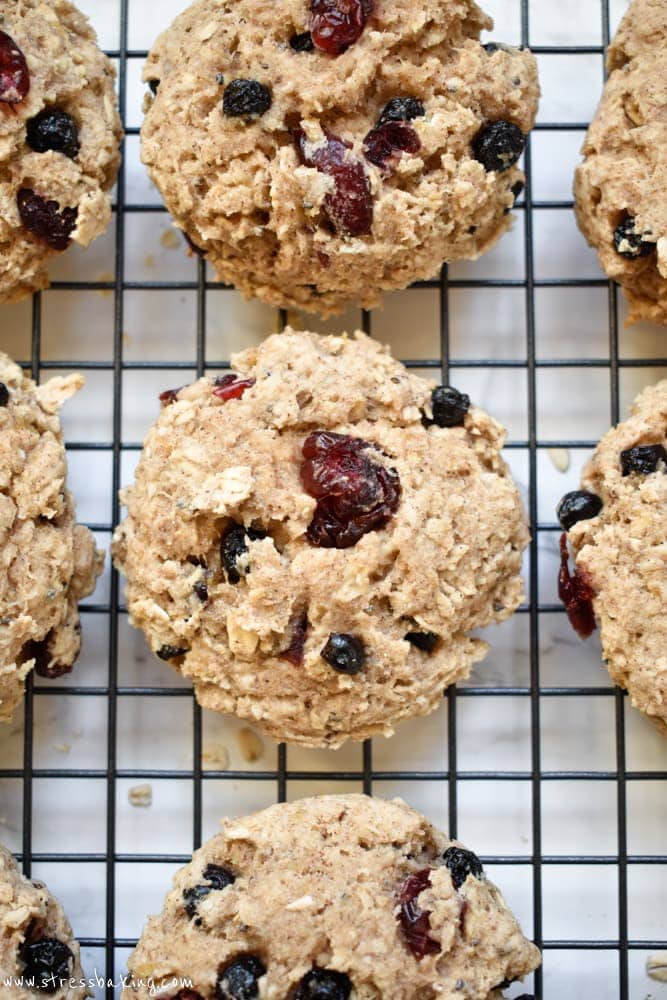 It took a little trial and error, but I learned a few things: 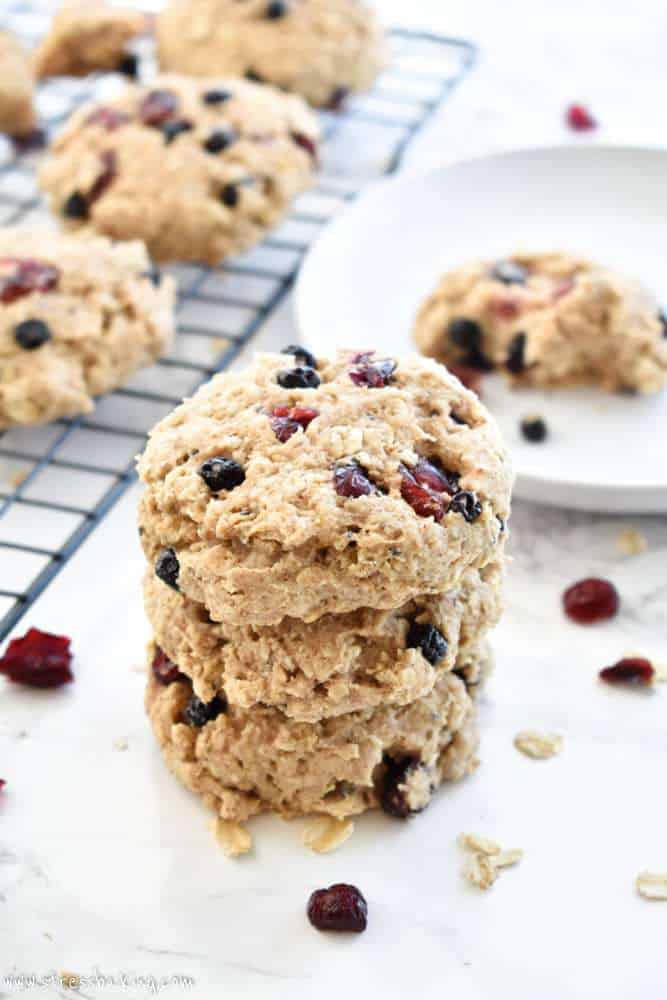 They don’t brown like a normal cookie would, so they don’t change color much, which I could totally see people finding off-putting. If you let them brown, they’re totally overbaked and dry and no one likes a dry crumbly cookie.

Well… maybe you do, in which case I don’t judge. But that’s not what we’re going for here. 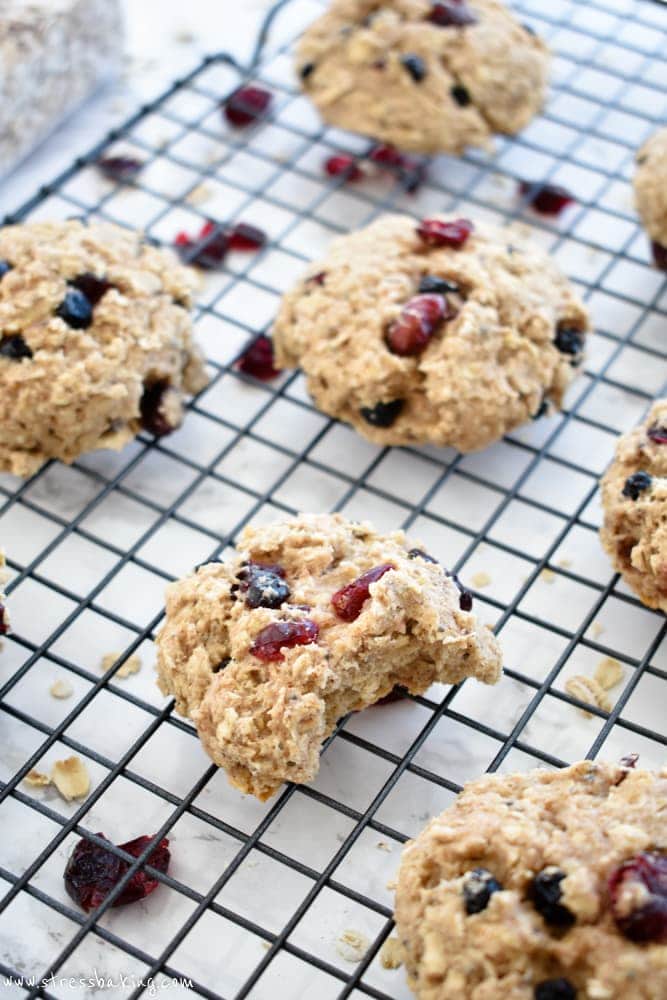 They’re very soft and chewy, and to keep them that way you want to very loosely cover them and store at room temperature – but not for more than a couple days. The downside to this recipe is that you don’t want to make a giant batch of them to eat over time because they won’t last.

However, you CAN store them, wrapped tightly, in the freezer if you want. 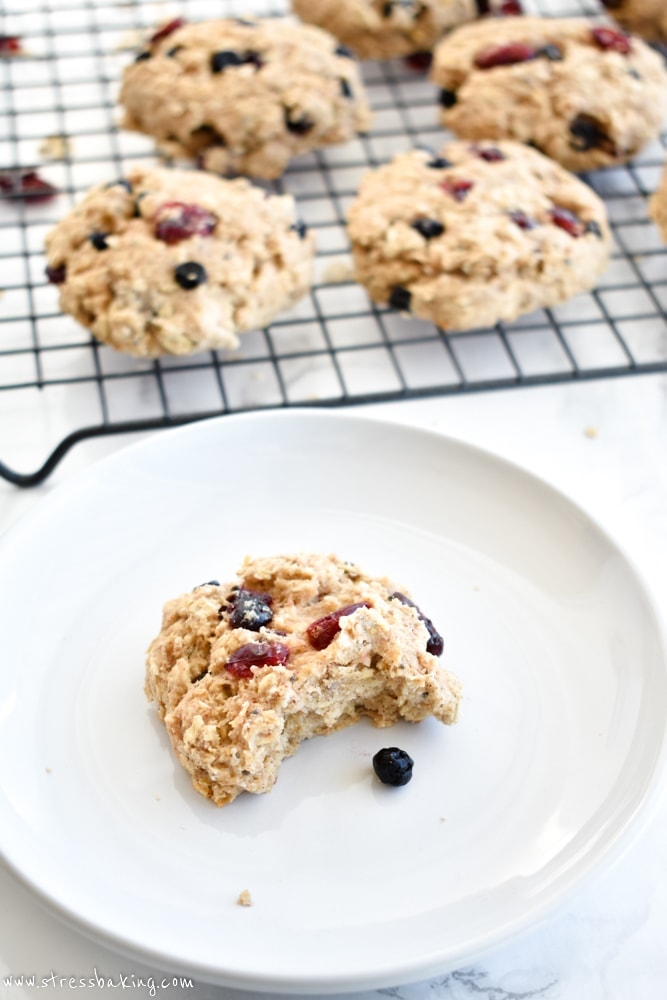 While these might not be chocolate chip cookies, they are still cookies. So you can totally tell people that you had cookies for breakfast and be guilt-free about it. People will look at you and think, “How in the world do they do it?!” 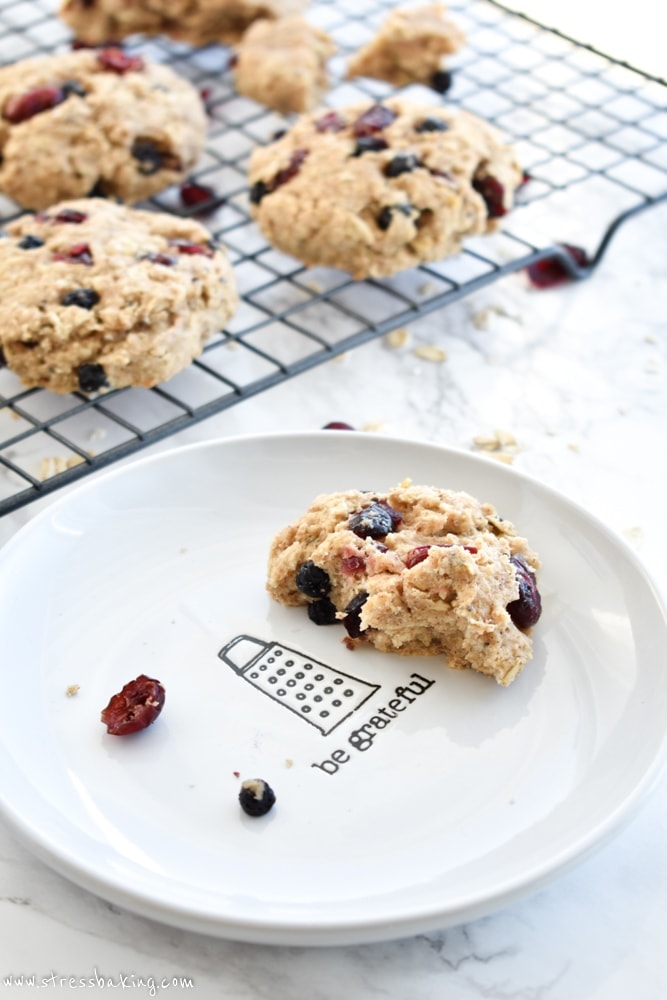 Side note: How fricking cute is this little plate? It’s part of a set of four adorable punny appetizer plates from Pier One. They were a Christmas gift from Bill’s family and I love them so much. They’re perfect for my Food Pun Fridays!

If you’re not familiar with those, follow me on Twitter and Facebook to see the puns flying about each Friday. I love when you guys participate, too, so just tag me or post to my wall to join in the fun! 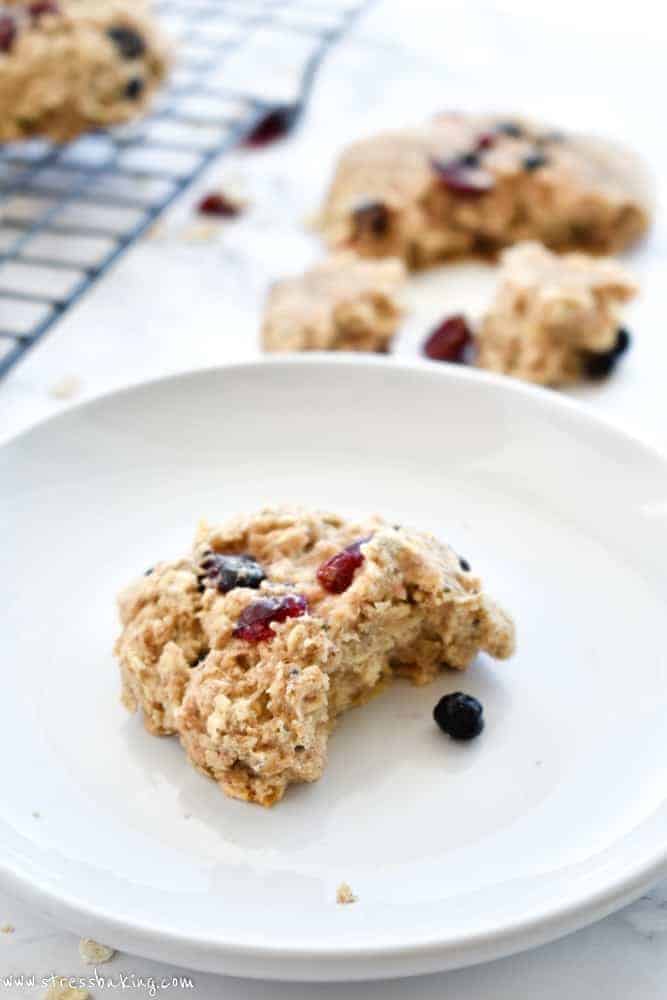 Now excuse me – I need to go make another batch of these and I want to give them my undivided attention. They’re a little needy.

After you’ve made this recipe, please leave a comment below with a rating – and if you came from Pinterest, add a photo of what you make to the pin to share your experience! 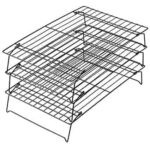 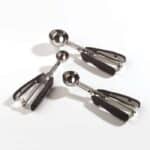 They don’t spread at all, so you have to make sure you flatten them to the size and shape that you want before baking.

You don’t want to roll them in your hands because they end up being kinda tough and frankly, look unappealing.

Top 5 Recipes of 2017 + personal reflections
← Previous
Baked Mac and Cheese
Next →
Let us know what you think!Click here to cancel reply.

I had something somewhat similar to these over thanksgiving: butter scones with dried cranberry and yes those were amazing so I know these are gonna be good and the addition of chia seeds and all the other good stuff make this an overload of nutritious goodness! Love it!

These sound so good and cozy!

Sam | Ahead of Thyme

Such an easy and delicious breakfast cookie! Love the bananas in this, I will be making this soon!

Wow! These are filled with so many good and wholesome things! I'm not a big breakfast eater but I could definitely get into these!

A while back, a friend told me about banana breakfast cookies. They sounded really good, but I've yet to try them. These sound even better with the berries, so I'll definitely be trying them sometime soon. :)