Jump to Recipe Pin Recipe
Be the first to rate this recipe! 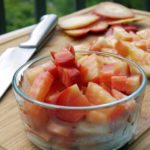 A step to step guide to preparing and cooking beets. Make my chocolate beet cake with them when you’re done!

Dwight Schrute isn’t the only person that likes beets. Beets can be turned into chips, added as a wonderful addition to a salad or soup, and yes – even cake. I know. Now all of you are going to be suspect of me the next time I serve up a slice of cake.

I get it. They’re ugly, lumpy, dirty, and they kind of look like some sort of monster with tentacles. I even get that some people don’t like the earthy taste of beets. But did you know there are different kinds of beets?

The most common red beet is the Detroit Dark Red, but there are so many more. The Golden beets are my personal favorite, and the kind you’re seeing in this post. They’re slightly sweet and easy for me to eat by the handful. Plus, they don’t stain your hands the color of blood. That’s a bonus.

All you need are:

The process of preparing beets isn’t bad – it just takes some time. So if you’re part of a weekly CSA, it’s great to pick up your fresh veggies and head home to spend the rest of the day preparing your veggies for the week.

First, you’ll cut the leaves close to the tip of each beet. Cut further down than you see above – I just wanted to make sure you could see what I was talking about.

Next, soak the cut beets and leaves in water. They don’t need to be in there long, you’re just going to get some of the dirt off the beets. Frankly, this step isn’t critical because you’re going to be peeling the dirty skin off the beet later – so if you want to skip this step, go ahead!

You can use the beet leaves for all sorts of stuff, so just rinse them thoroughly, let dry, and store for future use. Or for use right that second. I’m not going to tell you how to live your life.

Pat the beets dry (because water and oil don’t mix!) and coat with some olive oil in a large bowl. Make sure they’re completely covered – it’s essential for the next step.

Coat each beet with a nice thick layer of sea salt. Seriously, pile it on.

Now wrap each beet individually (and completely) with squares of aluminum foil.

Place all the wrapped beets on a baking sheet and pop them in the oven at 375°F for an hour.

Remove from the oven and let them hang out on the baking sheet for a bit until they’re cool enough to handle. When you unwrap them, you’ll see that the color has changed and now they’re… well, still dirty. That’s why the next step is essential.

Peel off the skin! Just wrap a damp paper towel around each beet and pull the skin off – it should come off pretty easily. Now they look like tomatoes, so maybe don’t set any tomatoes and beets side by side at this point. Beets are firmer than tomatoes, so if you sliced into a tomato thinking it’s a beet… well, you’ll end up with a mess. A delicious mess, but a mess none the less.

Now you can slice and dice the beets to your heart’s content!

I love them diced into small pieces, which makes them easy to throw into a salad (or grab by the handful as a snack).

Ready to give beets a shot? Check out these recipe ideas on Pinterest – something is sure to strike your fancy! 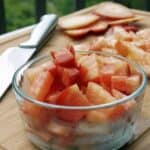 How to Prepare Beets