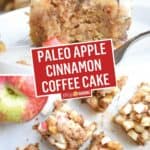 Truth be told I’m exhausted because I’ve caught the cold that my husband has been fighting off for over a week now (shakes fist), I’ve been plowing through a big backlog of blog work I need to get done for the holidays and the cold weather just has me all sleepy.

Apple cider comes from apples, which is a plant food that’s considered a part of a paleo diet – but I admit that it does contain sugar from those apples, but without the fiber you get from crunching into an apple itself.

So I treat apple cider the same way I treat any other ingredient in my paleo recipes – it’s all about moderation. I’m okay with it, but if you’re not that’s totally fine, too. That just means this might not be the recipe for you!

This coffee cake is based on this cranberry coffee cake I made last month, and I can’t pick a favorite. This one is more moist thanks to the addition of apple cider, but that also means it doesn’t last as long in storage.

This is best the same day or the next stored in an airtight container (preferably in the fridge), but I wouldn’t advise keeping it longer than that.

As far as I’m concerned, that makes it the perfect breakfast for when you know you’ll have a crowd! Christmas morning, brunch, or just a few people with really big appetites.

So take a slice (or two, I won’t tell) and pair it with your morning tea or coffee. If you’re not paleo, whip yourself up a little vanilla glaze and drizzle it on top – it gives it a little somethin’ somethin’. 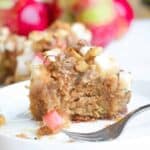 Store in an airtight container in the fridge for up to 2 days (it’s best the same way or next).