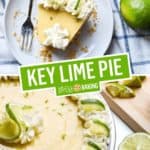 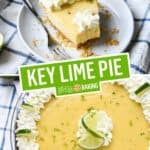 This key lime pie is tart, sweet, creamy and easy to make! Only four ingredients in the key lime filling and three ingredients for the graham cracker crust.

Are you recovering from Game of Thrones as you read this?

The series finale was last night, and while I don’t care about that show in the least, I’m obviously in the very small minority. I know what it feels like to be so invested in a show that you’re literally on the edge of your seat and you kind of forget to breathe, so I can relate.

Plus, the GoT episodes are long and it’s on late (on the East coast, anyway) so I know people will totally have a Game of Thrones hangover today.

But like I said… for me, the show ending is the equivalent of the shrug emoji. Just not a fan.

Semi-related, I have a confession to make: I don’t like key lime pie. I really don’t. I love basically anything else lime-flavored, but key lime pie is a no-go for me.

I’ve never been able to pinpoint exactly what it is that I don’t care for, and I’ve tried all sorts of various kinds served in restaurants, made by friends… I just can’t get on board.

So, with that confession out of the way, I want to clarify that as someone who won’t eat it herself, I’ve had a ton of different taste testers over the years and this is the recipe that people rave about.

I’ve made mini key lime pies for Friendsgiving celebrations, I’ve made key lime pie bars for work parties, and I’ve made it in its original key lime pie form (like you’ll see in this post). Every time it’s been a hit.

I once made the pie for a Fourth of July party where there was going to be ten people, so I sliced them into sixteen smaller slices (since it’s usually eight slices). I showed up and put it in the fridge, walked away for about fifteen minutes to say hi to everyone, and by the time I came back to the kitchen to help setup there was one sliver left.

What’s the difference between limes and key limes, anyway?

So, I’ve always wondered what the crap the difference is between limes and key limes. I did a little research and here’s what I learned:

Key limes are harder to find in stores, but don’t despair! Most stores sell bottled key lime juice, so if you can’t get your hands on key limes you can still make key lime pie.

Making the filling is also all sorts of easy.

Once everything is ready to go, you’ll throw it back in the oven until the filling is mostly set and the center is just a little bit jiggly (for me it’s always 20 minutes).

Let it cool on a wire rack and then store it in the fridge until you’re ready to decorate it!

I love making my mascarpone whipped cream (shocker) to pipe around the border, and then add thin, quartered lime slices. People have commented that having a less-sweet whipped cream on top creates a really nice balance between the sweet and tart pie.

And if you’ve never had my mascarpone whipped cream, it’s my favorite thing and I want to put it on absolutely everything. It’s less sweet than your typical canned whipped cream, and it’s stabilized so it won’t fall apart on you once you’ve piped it (but it’s not stiff like buttercream).

So once your pie has cooled, you could decorate it with the whipped cream ahead of time to save yourself a few minutes before serving.

I’m also a big fan of a big dollop of whipped cream with a cute little twist of lime right in the center. Then I add some fresh lime zest all over the top, and we’re all set.

It makes a pretty presentation, don’t you think?

Does anyone else feel like they’re really bad at cutting pie? I am consistently terrible at it. The cuts are never straight, I lose part of the crust along the way, and they always just look… weird.

I really don’t know why this is so difficult for me. If you have some pie-cutting magic, please share it with me so I can stop being so bad at this.

Regardless, you can slice it into 8 slices, or – if you’re better and slicing pan than me – you can manage to get 16 thinner slices out of it.

Or you can just slice it in half, lift one side onto a plate and hand the pie plate with the other half to your significant other and call it a day. I’m not here to judge.

I recommend using a 9″ pan, because it gives you a decently thick crust and filling with some height.

We’re not talking Cheesecake Factory towering heights or anything, but it’s respectable.

While I may never partake in a slice of key lime pie with you, I’m here to cheer you on while you make and eat as much as your little heart desires.

Sharing is caring, so invite a friend over to help you demolish the pan.

I’m including the above picture because I think that piece of pie looks like a little lime-eared bunny and it makes me laugh.

LOOK AT ITS LITTLE WHIPPED CREAM NOSE. I slay me.

Key lime flavor doesn’t have to end with pie: 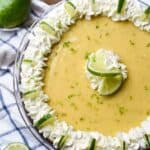