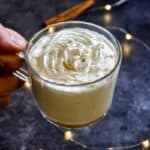 An easy, creamy, spiked homemade eggnog recipe that doesn’t waste the egg whites! You’ll have chilled eggnog ready for party guests in no time. Serve alongside all your favorite Christmas cookies and festive treats at your next holiday party.

Question: Is it even the holidays without eggnog?

I don’t think I’ve ever been to a Christmas party that didn’t have either a big bowl of spiked eggnog, or eggnog-infused cocktails. It’s like there’s an unspoken rule that if you don’t serve it at your party, the holiday gods will come down and take away your tree topper.

Okay, maybe not – but you can’t deny that it is a Christmas season staple. Growing up I never wanted to even try eggnog because the idea of eggs in my drink freaked me the hell out.

Who can relate? Raise your hands, I know you’re out there. Sometimes just the name of a drink or food can be so off-putting that you’ve written it off before you’ve even tried it.

Hear me out on this one, though – eggnog is freaking delicious. It’s not like you’re Gaston and drinking five dozen raw eggs in a glass, it’s going to be okay.

But something I can’t emphasize enough with eggnog is to always use quality eggs. It’s the star of the cocktail show, and you need them to be good.

In this house, we only use Pete and Gerry’s Organic Eggs because they’re free from pesticides, added hormones, antibiotics, and GMOs.

We’re pretty picky about our egg choices, and using eggs that come from small family farms (a couple of which are just north of us in New Hampshire) who are dedicated to humane animal treatment, safety, and environmental sustainability is a priority for us.

Plus, the flavor and quality is consistent and can’t be beat (in my opinion).

I also enjoy a hearty amount of homemade mascarpone whipped cream on top of mine, with a little sprinkle of nutmeg.

You could of course use canned whipped cream, but if we’re going to make homemade eggnog, why not make it homemade everything?

Can I make eggnog without alcohol?

Absolutely – the alcohol is optional. I always make mine with a combination of rum and amaretto, but if you want to keep it non-alcoholic you can just omit it. No substitutions or alterations needed!

How long does homemade eggnog last?

Homemade eggnog will last 2-3 days if stored in the coldest part of your fridge in a closed container.

Now whip up a batch of chilled eggnog, invite your friends over in their ugly sweaters, and toast to a festive and enjoyable holiday season!

When you’re ready to serve…

Storage: You can store the eggnog for 2-3 days in a closed container in the coldest part of your fridge.

Another thank you to Pete and Gerry’s for filling our fridge with complimentary eggs and sponsoring this recipe!