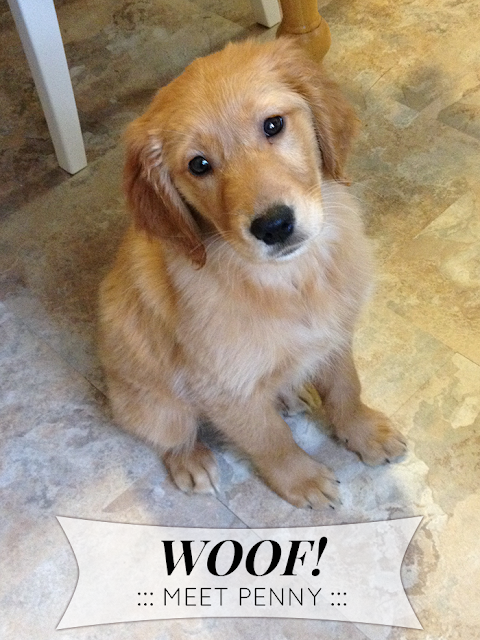 Is this not the sweetest, most precious, fuzziest, furriest, heart-melting face you’ve ever seen? Of course it is.

I’ll try to keep the verbiage to a minimum here and let you gaze at her adorableness. The boyfriend and I decided we were going to actively start looking for a puppy, so we began looking online. Petfinder, local rescue organizations, humane societies… and finally we tried Craigslist.

We found an ad for a litter of ten of golden retriever puppies who needed new homes. The pickup would be in the middle-of-nowhere Maine. “9weeks old golden retriever puppies to a good home for adoption. Adoption fee may apply. Males and females. Medium to dark. Pups are going fast.” It was posted 19 days ago. What were the chances any would be left? Slim to none. But… we figured, why not? Let’s just email them and ask.

A short time later we got a response: “One beautiful female left.” My heart skipped a beat and I got a knot in my stomach. We knew we had to make a decision quickly, so we ran through the pros, cons, best and worst case scenarios at lightening speed. We replied, asking a few key questions and proposing that we pick her up on New Year’s Day since we were going to be out of town until then. After a little back and forth, they confirmed that she would be ours. And being the OCD, constantly-planning freak that I am, I insisted that we start picking up as many of the supplies we needed for her immediately. We still had a week before she would be here, but I needed to nest. After several trips to the store and picking up some stuff from a good friend who was being nice enough to loan us a few things, we were more or less all set.

On the morning of January first, we made the long drive from where we were staying in Vermont to Maine – a whopping five hour drive. I should mention that the week before I found out I need glasses to drive because I have astigmatism in one eye, so I get sort of car sick and have a rough time in the car. The glasses won’t be here for another week, so I had to tough it out without them. It wasn’t pretty – I’ll just leave it at that. I’m going to leave out the details about the home we picked her up from for the sake of being tactful, but I will say that I’m so happy that we could give her a quiet, loving home with us. We prepped the truck for the drive and she immediately laid down next to me and either slept or snuggled the entire drive home. We made a pit stop to give her (and us) a chance to pee and she was a trooper in the below-zero temperatures and icy, snowy ground.

When we got home we found that she had pretty bad fleas, so we jumped right in with a flea bath – the poor thing. She was curious about the tub and the sound of water gets her so excited (clearly she’s a retriever). But her excitement diminished pretty quickly once she got wet – we got through it, though. The funny thing is despite the trauma of the flea bath, she still wants to get in every time one of us goes in the bathroom. 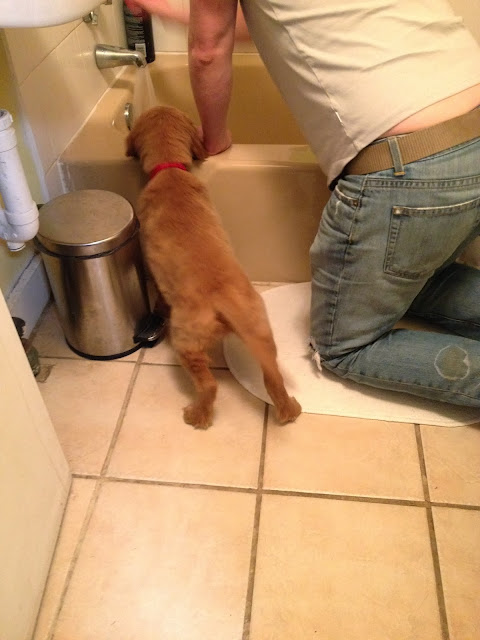 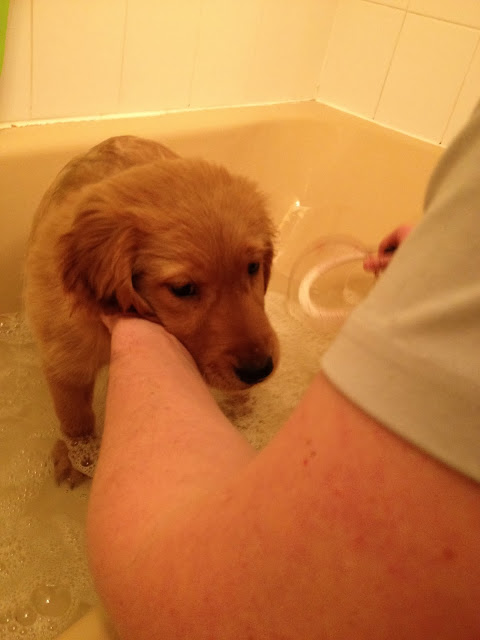 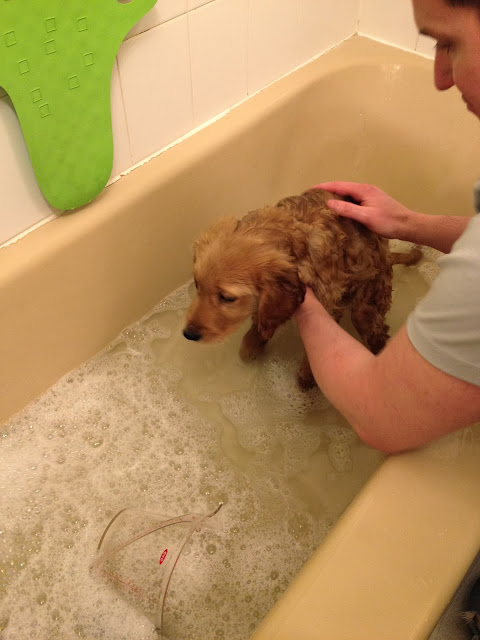 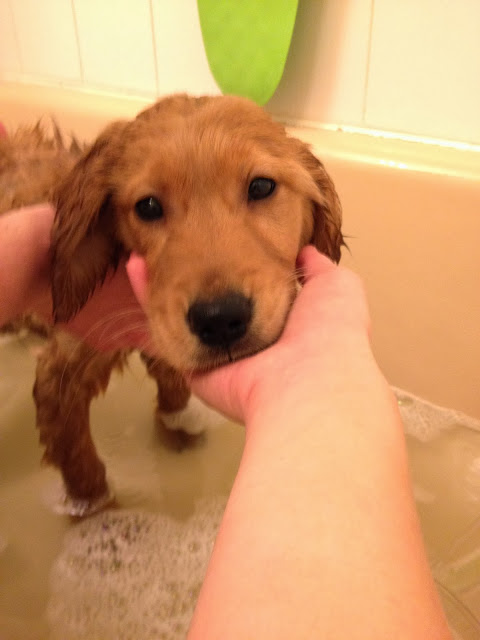 Once she was dry, she was more playful and gave allllll the kisses. She likes being on her back in your lap for tummy scratches – just look at that little puppy belly. 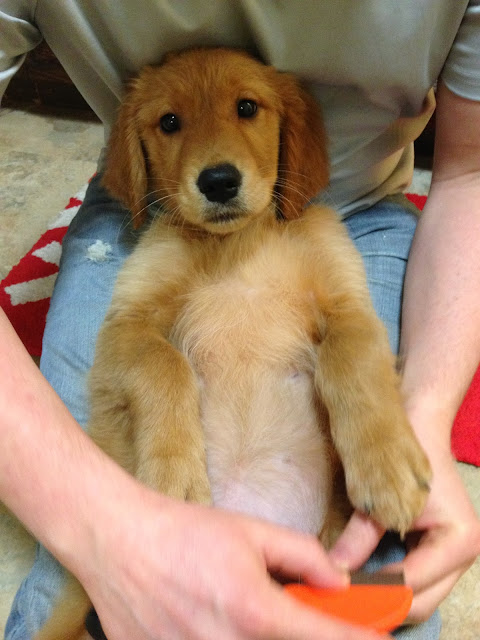 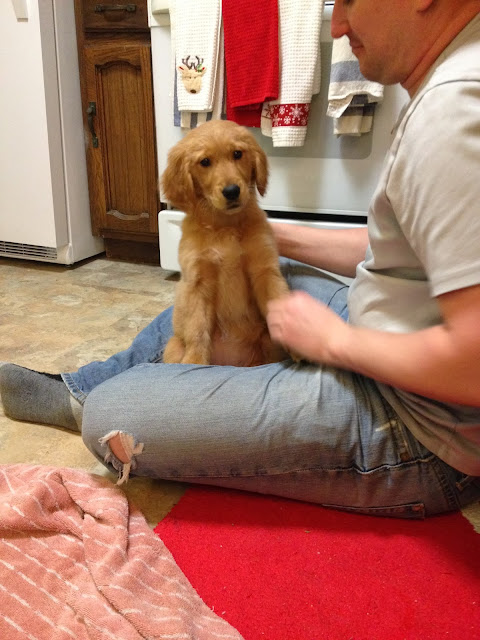 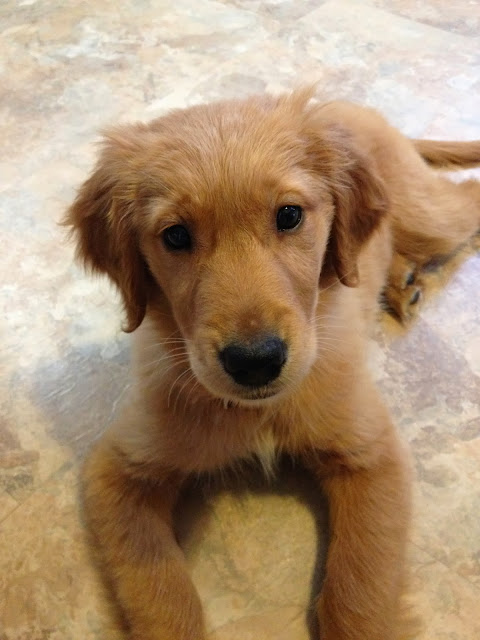 We say that she likes to “help” in the kitchen. She stands behind or next to you and just stares at your every move. I think she wants to be a supervisor. 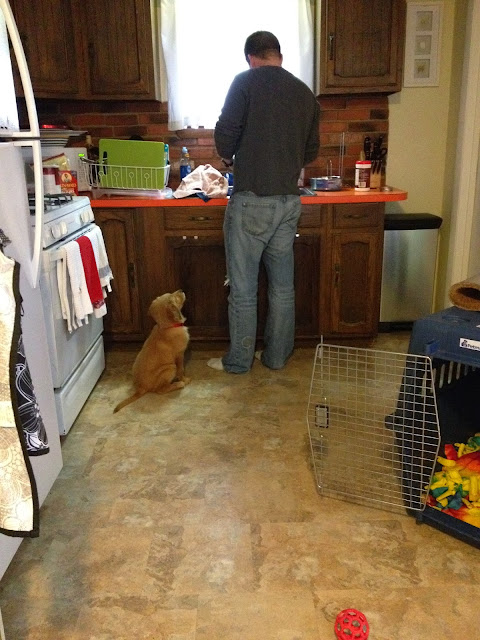 She has a little tiny mustache, and as far as I’m concerned that just makes her handsome and pretty. 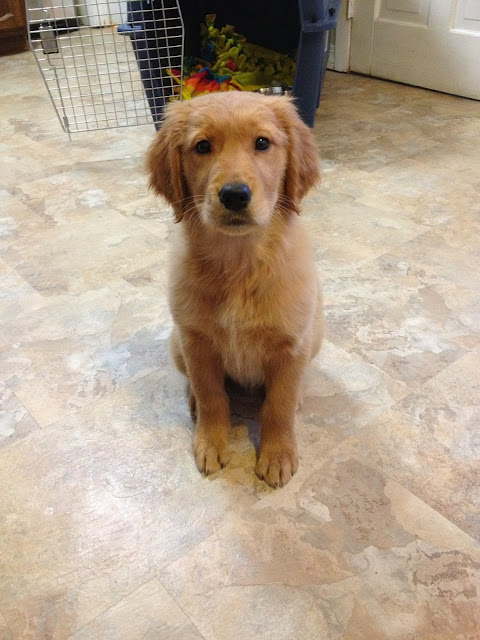 When you pick her up she lets you do pretty much anything you want. Any position, walking or standing still… doesn’t matter. She’s such a little lovebug. 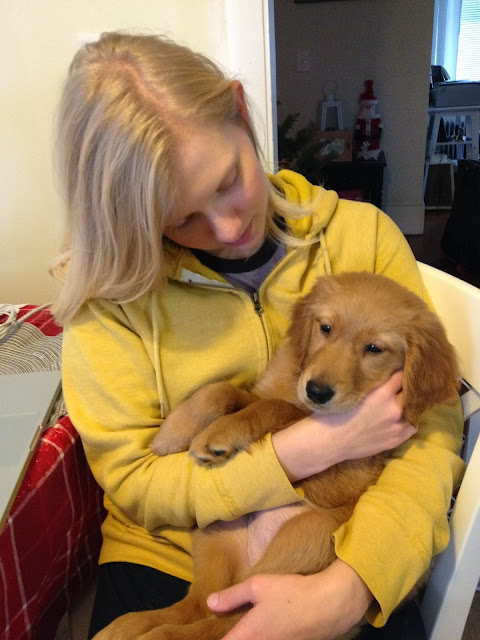 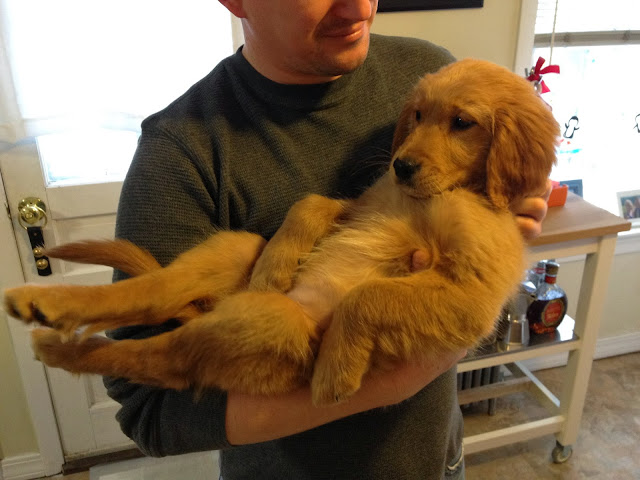 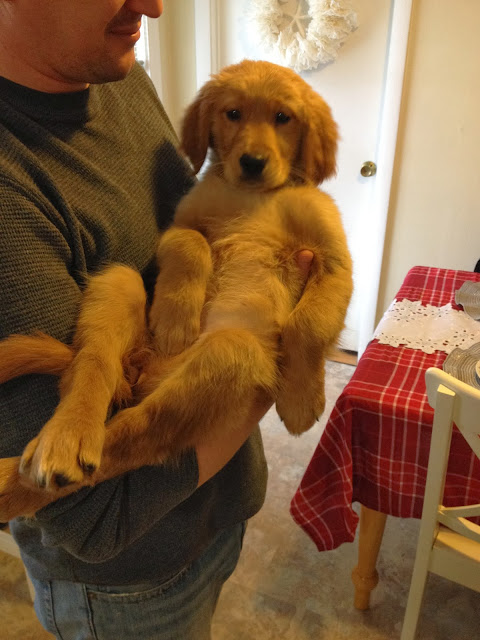 We also discovered that she is not a fan of snowplows or snowblowers. The sound must freak her out, because she runs to the back corner of the kitchen under the dining room table. I feel for her – I’m not a fan either. I tried to lie under the table with her, but I’m too big – so I gave her moral support from the outside. 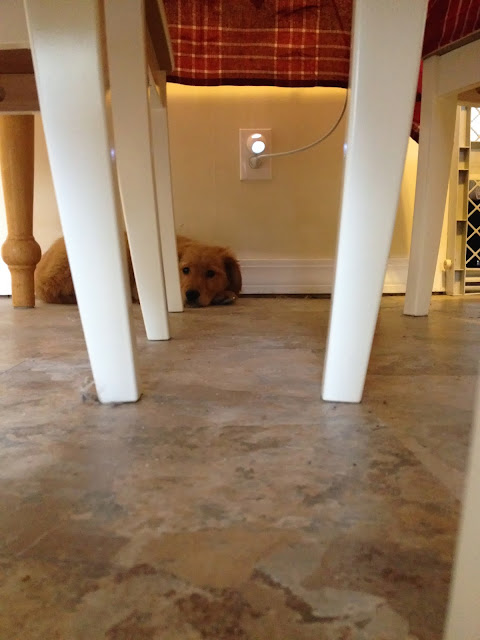 She’s grown to love her crate after a couple nights – I think she’s realized that we’ll still be there in the morning. 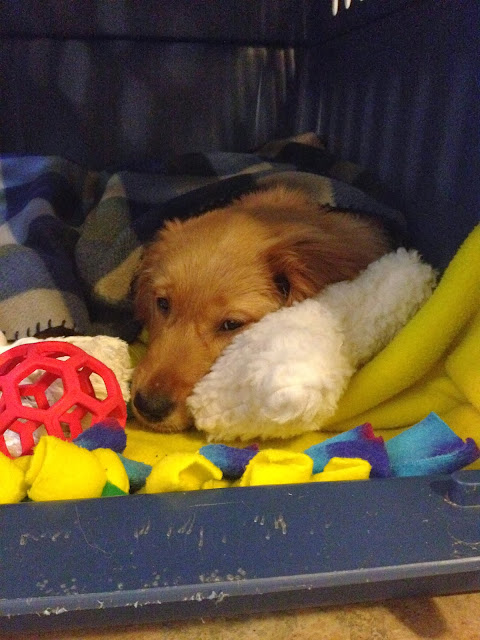 She also likes to help me when I’m working. I got up to grab something and when I came back she was trying to climb into my seat. I did let her have her first Skype video chat today, which was pretty hilarious. I love when dogs can’t figure out where the person is. She kept looking behind the screen and then looking back at me as if to say, “Mom! Are you seeing this?!” 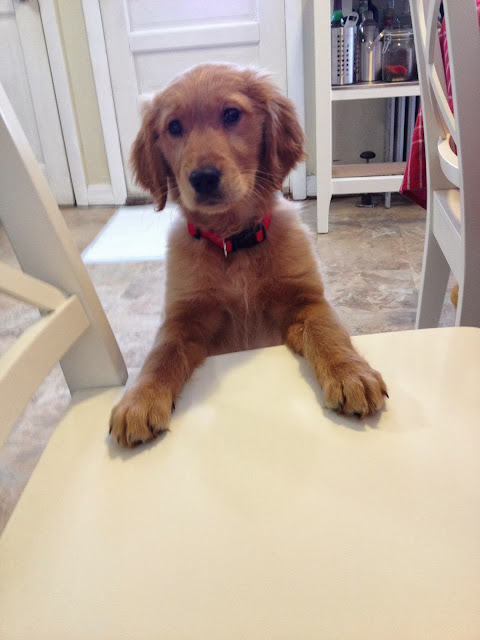 I’ve found that using the bathroom is a challenge now. I pushed the door to, and she shoved her way in. I tried to rationalize with her and explain that I wasn’t being attacked by the bathroom faucet, but clearly she was concerned. Now I just let her come in and supervise. 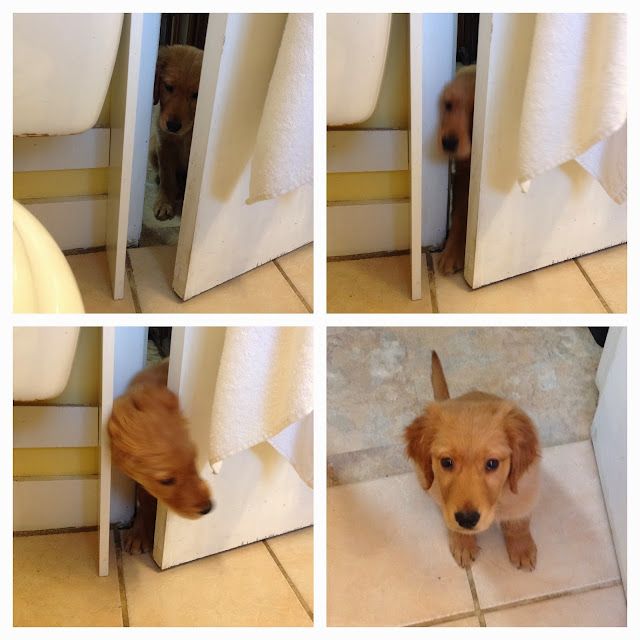 The weather has been pretty horrendous lately, what with Blizzard Hercules and all. Even though there was 8 inches of fresh snow this morning and a wind chill of -4°, I wanted to grab a few pictures of her outside in the snow. She was, again, a trooper and tolerated it for about ten minutes before she was shivering and we called it a day. 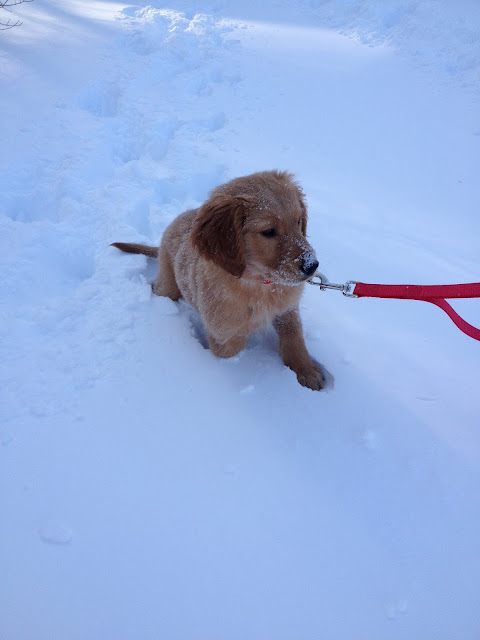 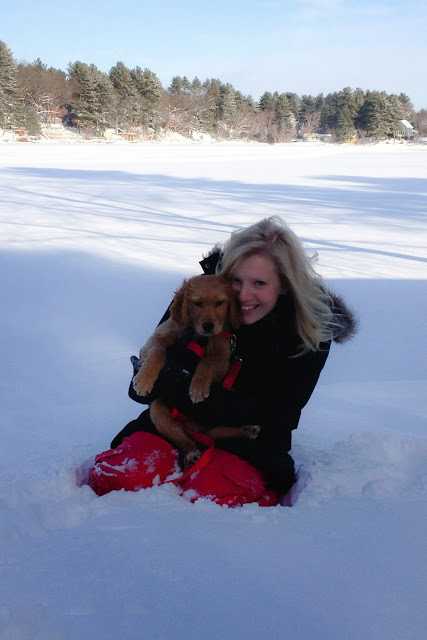 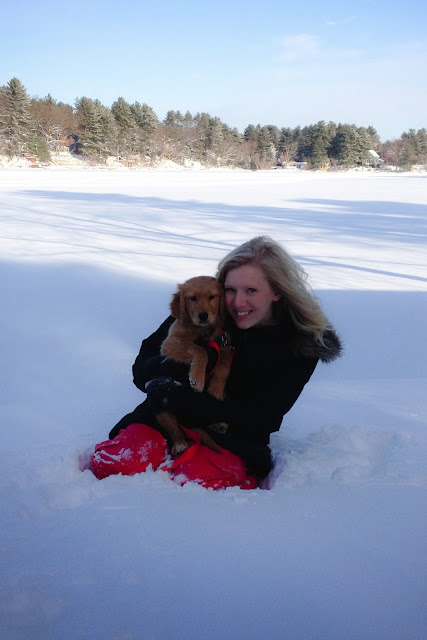 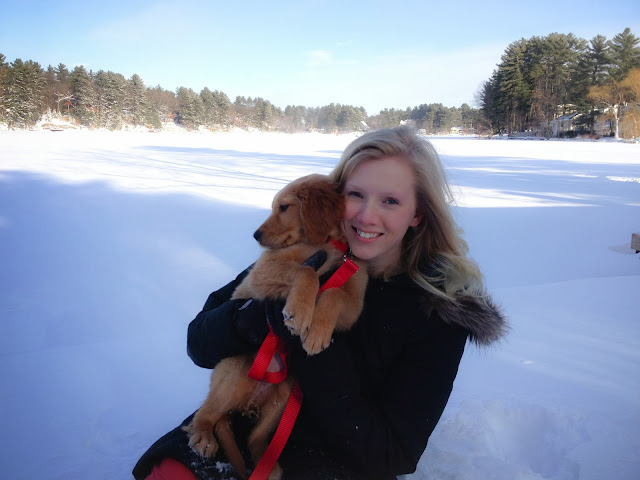 My clothes are covered in hair. She has an endless supply of snuggles.
I have a killer cold. Her kisses heal all wounds.
She burps in my face. She has the quintessential puppy smell.
She slobbers on my leg. She never gets sick of seeing us.
She pees on the floor. She’s excited about everything in life.
We’re sleep-deprived. And we couldn’t be happier!
Spicy Quinoa Stuffed Peppers
← Previous
3-Ingredient Banana Dog Treats
Next →
Let us know what you think!Click here to cancel reply.

Skyping with Penny was awesome - she was so confused about the "magic screen"! She is so adorable. :)