People have been sending me messages asking why I’ve only had one post on the blog every week(ish), and while it’s not to know that you care and you’re looking to me for new content because you’re really enjoying it, I feel so badly that it seems like I’ve been slacking. I wanted to address is so that you all aren’t thinking that I’ve stopped caring – because that couldn’t be further from the case.

I’ve just completely run out of time lately. Between putting in extra hours (at all hours) at work, training for a 7K on July 4th (!) and then attempting to sleep and eat… there’s just no time. I was trying to keep up on this and everything else, but I realized I was either sacrificing my meals or my sleep, and those are sort of essential – you know, for living and whatnot. So, sadly I just need to ease up on the blog side until the dust settles a bit after July 4th. I want to get at least one recipe in before then though, so we’ll see how that goes.

I’ve also received a few messages asking how my health has been since my last update – and like the above, it means the world to me that some of you have even thought to ask. If you’re interested, read on – if not, just skip over this because I’m going to be pretty uncensored about it:

I can breathe a sigh of relief with regard to the breast cancer (which I still want to emphasize was very a very early stage), because I’m in remission. Because mine was estrogen-positive, I will continue to take medications and go in for check ups every six months. But as far as I’m concerned, I can wave goodbye to that nonsense and go back to hating wearing a bra just because bras are terrible, and not because I’m too uncomfortable to wear it.

The endometriosis is still where it’s been for a long time because I have not yet scheduled a surgery to remove the existing (and abundant) endometrial growths. I’m still in a constant state of pain that I call “living at a 5”. I’m always at least feeling pretty uncomfortable to a point that I shift positions if I’m sitting or lying in bed trying to sleep because I get antsy over the discomfort.  And you might be asking yourself, “Does moving or changing positions ever help?” Nope. Nope, it does not. I think I squirm just because I don’t know how else to deal with it. About 25% of the time the pain can be completely debilitating and prevent me from being able to go to work, eat, or sleep at all. That 25% is at that time of the month, which for me lasts an average of 2 weeks.

Between feeling like an alien is in my uterus trying to claw it’s way out and the fact that my life resembles Carrie during that time, it’s really difficult to function normally. And frankly, it’s really expensive as well. Pain killers, heating pads for home, those adhesive heating pads for when I leave the house, who even knows how much water for practically scalding hot baths (because it never feels hot enough and I think subconsciously I’m trying to drown my uterus in hot water), relatively crappy health insurance, and needing to buy 2-34 packs of Super Plus tampons for each cycle along with pads and liners (because Carrie)… it all adds up.

I’m still trying to get this under control. As far as the nutrition side of it goes, I did a 6-week elimination diet and found that my problem is entirely soy. I still try to avoid sugar, gluten and dairy as much as possible, but I’m turning away soy entirely. That makes me heart sad because I love edamame, but it could certainly be much worse. My exercise regimen has ramped up quite a bit from my normal yoga and cardio – I’ve been training for this 7K, so I’ve doing yoga and running on alternating days (search for me on Runkeeper!). I’m still in the stage of being super hungry all the time and trying not to eat everything in sight. No weight loss yet, but if I can get my weight to at least plateau I’ll know what size clothes with which I need to go replace my wardrobe. It’s still a struggle, but I’m working on it and loving the tips I’ve been finding on Pinterest from fellow PCOS-sufferers.

For an added bonus, I saw a dermatologist for a crapload of new moles that had popped up over the last couple months and found that a couple on my arm and head were potentially basal cell carcinoma. The rest are benign, and I’ve already had the dangerous ones removed and they’re healing nicely, but I seriously don’t recommend having these things on your head. Good lord, is it uncomfortable and awkward. 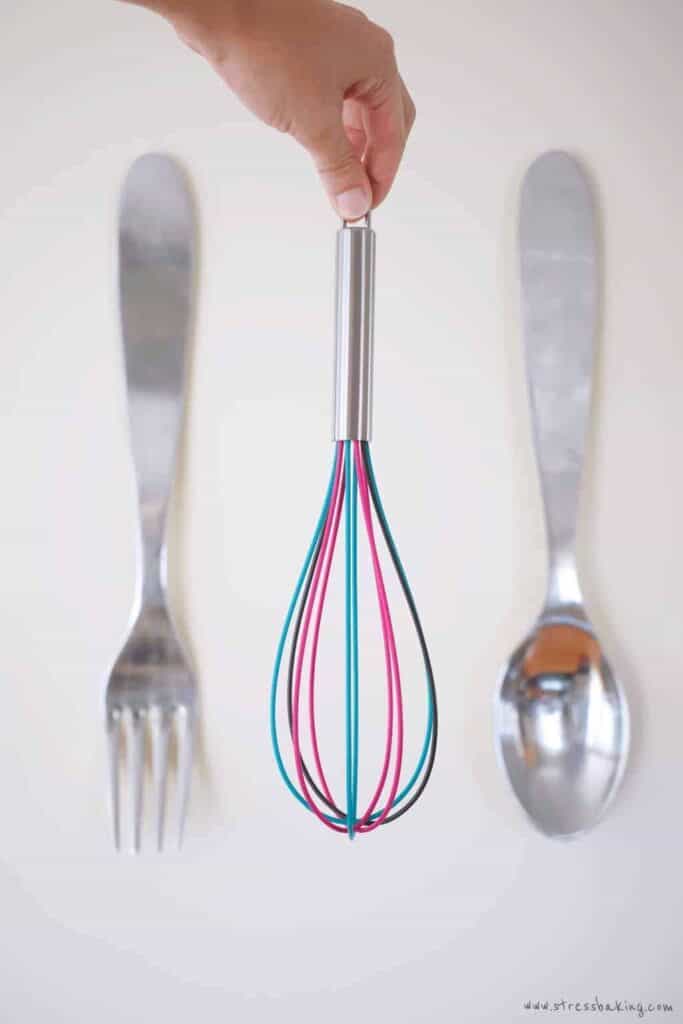 So yeah, that’s a quick life update from your truly. In more fun (and less graphic) news, you see this whisk? How cute is this whisk? I found a set of two at Home Goods recently and since it’s the colors of my blog there was no way I was going to pass them up. They’re not only cute and blog-appropriate, but they’re actually really durable and great so far. I can’t find these exact colors online, but this 10-inch whisk and this 8-inch whisk are close.

Now I’m going to go fight the urge to inhale a half gallon of chocolate chip ice cream and watch this video on repeat.