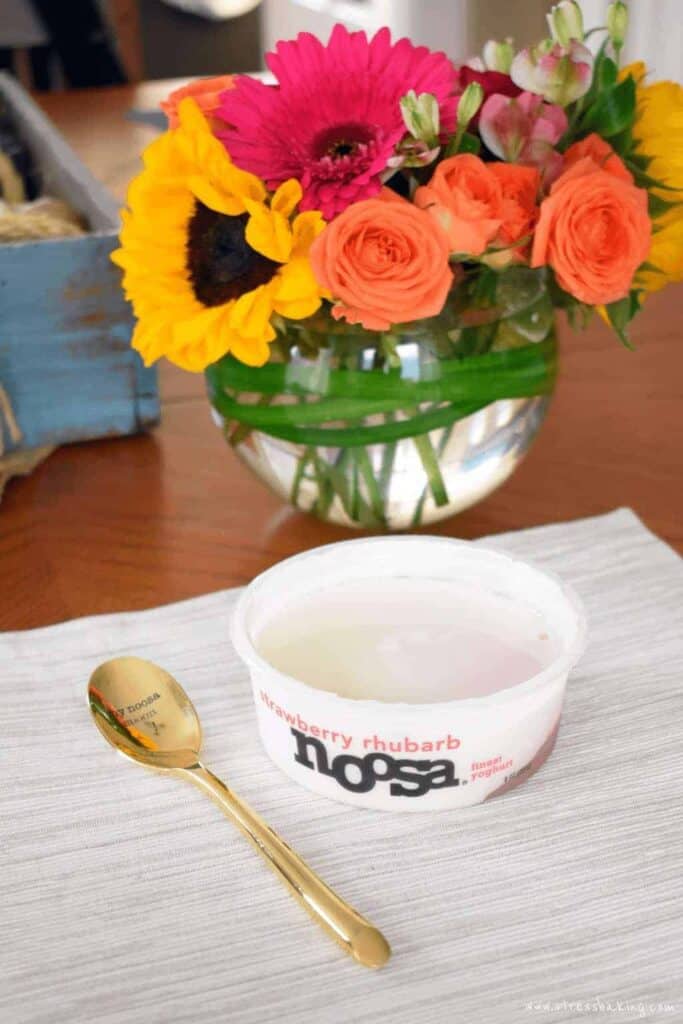 As you may have seen on Facebook or Instagram Stories, I went to the best brunch yesterday. A few weeks ago, I received an invite from Holly of Taste and See for a brunch that she was hosting sponsored by Noosa Yoghurt to celebrate their new Noosa Mates product. She said some other Boston-area bloggers were going to be in attendance, and I was quick to RSVP a resounding “Yes!” As you all know, I’ve been trying so hard to grow this blog and make new blogger friends, there’s no way I was going to turn that down. However, I was very honest with Holly upfront in saying that I don’t eat yoghurt, because I would feel bad showing up and saying, “Oh god no, get that out of my face”. She encouraged me to still come because there would be mimosas, so I thought about it for a second and obviously YES I WILL COME DRINK MIMOSAS.

I’ve gotten used to being the baby blog in any given group – by, oh, I don’t know… a bagillion followers. It’s intimidating and makes me a little sad. It’s been so hard to grow traffic and a following because I feel like I haven’t found my “tribe” yet. I’m still trying to get a handle on a rhythm, and it’s so difficult when you work a full time job in addition to running a blog. It always seems like everyone else snaps their fingers and voila! They suddenly have a million pageviews. It’s hard not to compare yourself to others when it’s an online space of uber-successful bloggers with TV deals, cookbooks and massive followings.

This event was no exception. Holly’s following is tremendous, and it’s easy to see why – her recipes are wonderful, she’s hilarious and down to earth, her photos are beautiful, and she has a killer kitchen to act as the center stage for her work. I’m not kidding. She has the kitchen of my dreams. Like, I almost considered just hiding in a cabinet and hoping she and her husband wouldn’t notice so that I could see it all the time. So there I was with my 1300 Instagram followers (who, by the way, are all freaking awesome) talking to bloggers like Georgina of A Noted Life, Shannon of Sunny Coastlines, and Mackenzie of Brunch on Sunday who range from 7K to 24K followers on Instagram. These women work really hard at what they do, and it shows. They’re also all freaking gorgeous. I mean good lord, I would just stare at myself all day if I were these women. I’m standing there with my crooked necklace and french braid that’s falling apart because I don’t know how girl and they’re all flawless. AND SO NICE. These are not superficial women who are making a living off of being beautiful brats, they’re SO NICE. So they’re nice, they have fantastic content, gorgeous photography, amazing experiences, and they’re nice.

Excuse me while I grab my hot mess of a self and see myself out.

But here’s the thing – none of them made me feel like a baby blogger. They were all adorable and hilarious and so sweet and complimentary, there’s no way you can’t love them. So yeah, that was pretty great. I made some new friends and got to see how the 1% live (I kid… sort of. Is there an online 1%? There probably is. I should google that).

Had such a blast with our #Boston blogger friends today! @holly_tasteandsee planned the ultimate brunch with a top-notch yoghurt bar, bubbly, photo booth, games and adorable gift bags. Thanks to @bostongeorgina, @mackenzienoelm, @tastyeverafter, @sunnycoastlines and @stressbaking for being there! Come visit us in Colorado anytime? #noosayoghurt #noosamates #brunch #cowballoons #moo’replease

Okay, now for the really wild part: I tried the yoghurt. I liked the yoghurt. I never put down the yoghurt. Pretty much every picture or video that anyone took has me holding/inhaling a container of yoghurt and/or a mimosa. This is the woman who has never, ever, ever liked yoghurt. I use it in baking for moisture in some recipes, but I have never been able to just sit down and eat spoonfuls of yoghurt – I would gag just smelling it. Noosa though? Jesus. I don’t even know why, but it’s totally different for me.

I started with the Honey Pretzel Peanut Noosa Mate and hoooooooly crap. I was sharing it with Georgina, but then I definitely commandeered the entire thing and practically licked the container clean. I asked Allison, the rep for Noosa who attended, if it would be totally weird if I licked it and she said “GOD NO” and told me how she usually gives the container to her dog (who is also a Golden like Penny, awww) when she’s done to prevent herself from doing the same.

Guess what Penny’s getting next time I finish one of these bad boys.

Then I moved on to the blueberry, and those things are out of this world. These are not normal blueberries, people. They use wild blueberries which are not the same as the kind you grab at the grocery store. They’re much smaller with a more intense taste. There is a huge difference, just trust me.

There are still so many more I didn’t get a chance to try, but you best believe they’re on my list and I’ll be raiding the nearest grocer of their stock when I see them. This is how it made me feel to know I can finally be cool and eat yoghurt:

Knowing I can FINALLY eat yogurt because I found one I like (spoiler alert: it's noosa yoghurt) makes me dance with Sunny Coastlines' favorite cow balloons ??Also, I taught her how to use a cow emoji. Just sayin'. ??#noosayoghurt #noosamates #sponsored

I’ve already got so many recipe ideas floating around in my head – the Noosa rep saw the wheels turning, so she knows I’m gonna be reaching out soon with emails written in all caps because I can’t control myself. Fun fact: Allison taught me how to Snapchat and showed me that sweetbabyjesus I am not meant to be part of this generation. I don’t get Snapchat! I just don’t get it. There’s filters for photos and it changes your voice and it turns you into a pixy deer or something? Ohmygod I don’t get it. I think I’m too old for this shiz.

So – if you’ve had Noosa before, what’s your favorite flavor? I need everyone to give me guidelines of how to eat them as snacks and not six containers as a meal because regulation is not a thing that I am good at.

Oh, and can we please talk about this spoon that was part of our swag bags from the event? COME ON. 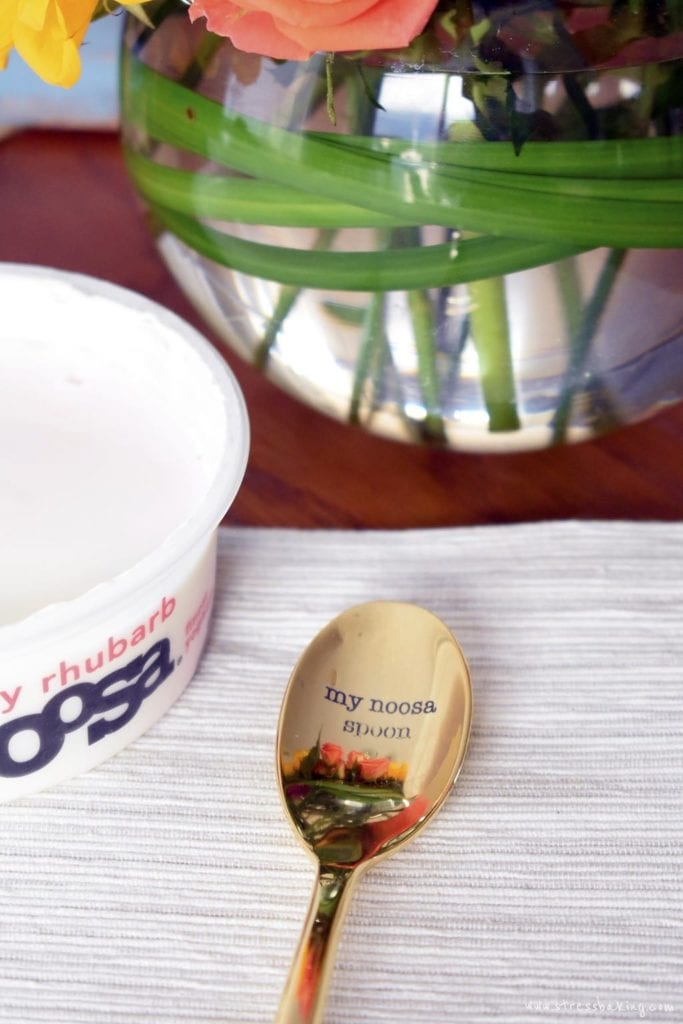 A HUGE thank you to Holly and Noosa for the wonderful event – I can’t wait to see you all again very soon!

This post is a recap of a sponsored event, but not sponsored itself – as always, all opinions are my own.