My friend’s condition has improved, she’s awake, alert and understands what happened. Unfortunately, there was shrapnel (Nails. I repeat – NAILS.) in the lowest part of her leg that had not already been lost, and they have to amputate further up than they originally anticipated due to the damage and infection. She asked to remain anonymous, but wants everyone to know that she is overwhelmed and humbled by the outpouring of support.

The staff at Mass Gen has been incredible – I’ve already hugged two staff members who were integral to saving so many people yesterday, including my friend, and are going above and beyond. I think I may have creeped them out a little, but I’m sure they know it was out of sheer gratitude (and I hope they appreciate that I give damn good hugs). 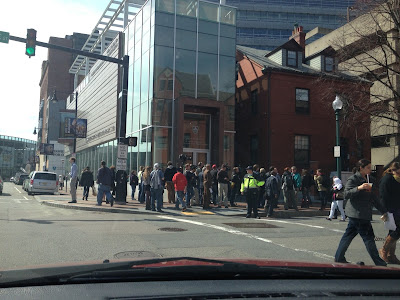 I accidentally stumbled on a press conference with the Governor – I got roped into an interview shortly after with a reporter for what I believe was WHDH 7News, in which I was pretty curt. I hope she didn’t take offense.

I had to get out of the chaos that is Mass Gen right now (press conferences and reporters, National Guard and policeman everywhere) and went for a walk while my friend went into surgery. My journalistic nature took over yesterday (along with morbid curiosity) and I walked toward Copley Square. They have shut down a 12-block radius as a crime scene, so I walked the perimeter. There are flags at half-staff everywhere you turn. I had every intention of taking some pictures, but as soon as I got to the East end of Boylston, I knew there was no way I could photograph that scene.

If you’ve ever been there, or know anything about this area of Boston, it is always bustling. There are businesses and restaurants galore, and a constant pedestrian presence. The streets are lined with cars, bumper to bumper, and you’ll always hear the music playing from each of the shops in the magnificent brownstones on each side of this iconic street. You’re hard-pressed to find a parking spot, and you consider yourself lucky to make it into Stephanie’s On Newbury without waiting an hour. Despite all the commotion, you can still take a leisurely stroll down Newbury from Mass Ave. to the Public Garden and Boston Common and enjoy all the history this city has to offer. On Monday, that changed.

As I looked West down Boylston from Clarendon, the sites of the explosions were glaring. There was blood everywhere. Debris, bloody flags, torn apart banners, fences, glass, and I could even see a shoe in the middle of the road. Copley Station was dark and unoccupied. The entire area was vacant except for the people involved in the investigation: cops, National Guard members, forensic experts, investigators, SWAT, FBI. There were vehicles of authority everywhere. I also encountered a lone photographer who was clearly sent to photograph the scene for professional reasons, and he – like me – put down his camera and stared at the devastation. 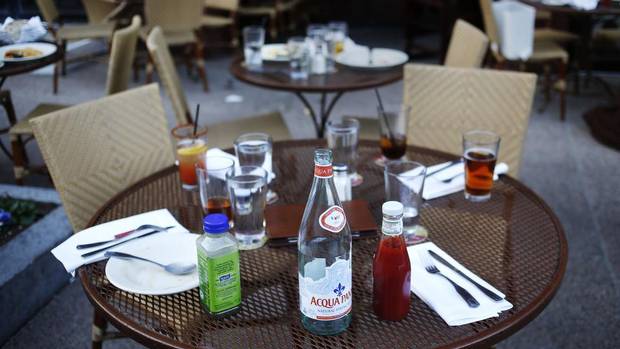 [Courtesy of The Globe and Mail]

I walked up to Newbury Street, fully expecting it to still be taped off. To my surprise, it was open – well… some of it was open. A handful of shops were open for business, but there were mostly dark storefronts with “Closed” signs, and handwritten signs taped to doors addressing their closure and urging people to leave the area. I think this is the closest I will ever be to an apocalypse situation  – at least I certainly hope that it is. There were tables for some of the local restaurants that had clearly been abandoned in the middle of meals – deserted plates, silverware, glasses and food still unmoved as if they are waiting for the patrons to return to finish their meals. It was incredibly eerie and unsettling. The individual losses people have experienced are being felt city-wide. And how could they not? The evidence of this terrorism is splattered on the streets, and the hospitals are flooded with reminders of what 20 seconds of pure horror can do.

To the families of the three victims who didn’t pull through – Krystle Campbell, Martin William Richard and Lingzi Lu – my deepest sympathies, and I hope you have the support that you need to get through this.

It’s a beautiful day in Boston, which almost feels wrong – but it is a nice segue for the city to take its first steps to heal from this terrible tragedy. 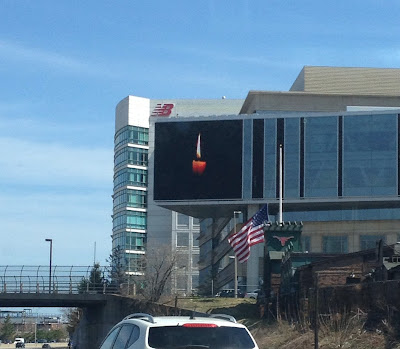 Digital billboard with a single candle “burning” for the victims of the bombings in Brighton. 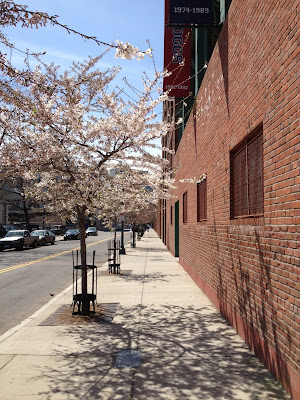 I took a walk through Fenway to clear my head – everything is starting to bloom…  I guess this is the “circle of life”. 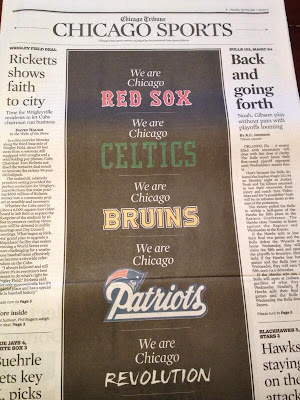