This post may contain affiliate links and I may earn a small commission with each sale. 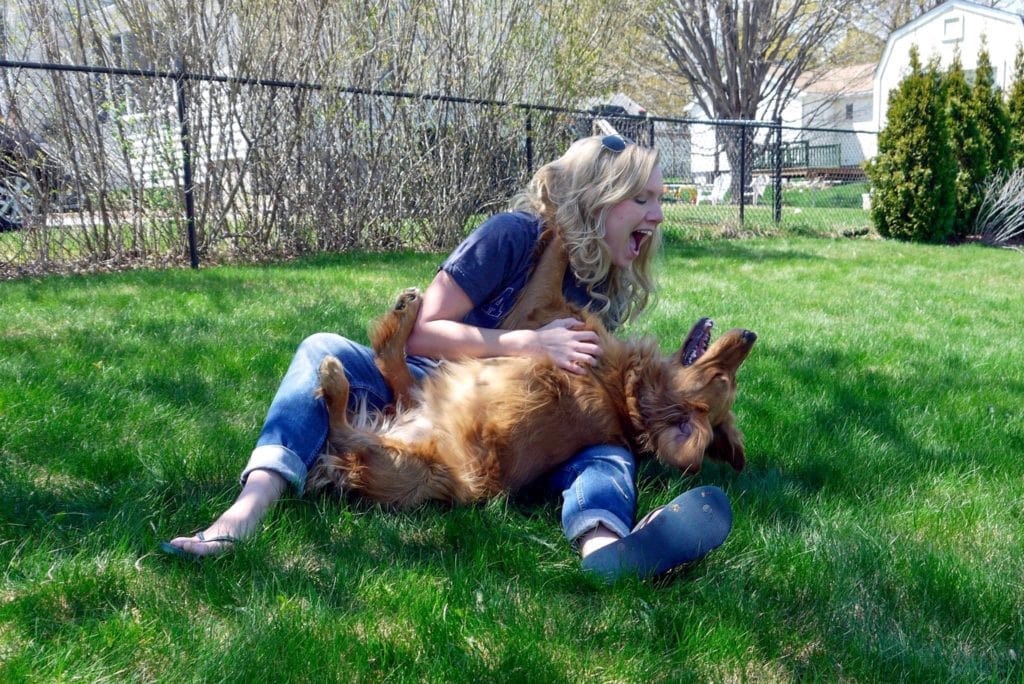 Things have been C-R-A-Z-Y around here. So crazy, in fact, that I haven’t gotten around to successfully finishing a new recipe to share with you all this week. I had a couple that came close, but they just weren’t good enough. And I refuse to share anything that’s “close, but not quite”. So, next weekend I will try again! I figure rather than be completely radio silent, I’d pour myself some coffee and share a little life update with you all. Join me, won’t you?

To start, check out this interview I did with Boston Voyager – I sent them the above photo to use, and I think I made a wonderful choice. 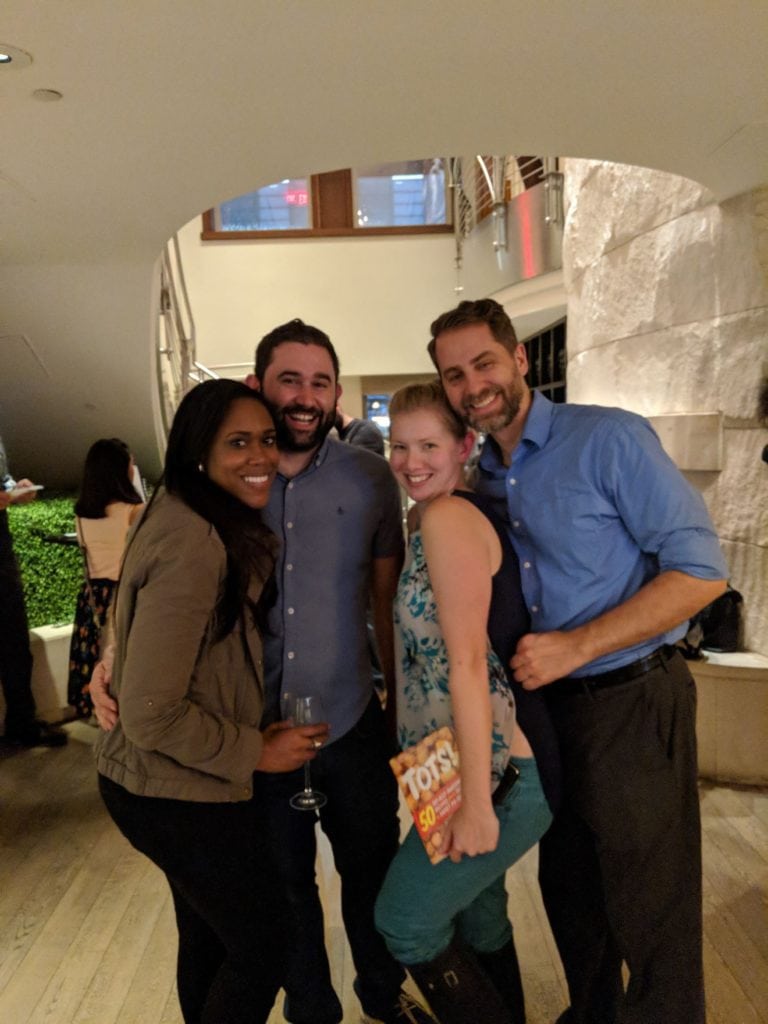 And then last week I went to my friend Dan’s book release party for his new cookbook “Tots!: 50 Tot-ally Awesome Recipes from Totchos to Sweet Po-tot-o Pie”. So much fun, and so happy for him!

Here’s the thing about having a “real job” – it takes up all your time during the week. I get up early, go for a run, shower, head to work, come home, make dinner, and then I might have an hour before bed. At that point, it’s dark and I’m not going to start working on a new recipe that late, knowing I’d still need to prep, bake, cool, take video/pictures, and then clean up. I hate rushing through the process, so I don’t want to put myself in the position where I have to choose either sleep or recipe development. So, it waits ’til the weekends.

I don’t mean to sound like I’m all down on my job – I’m really not! We actually just moved into a shiny new gigantic building in downtown Boston last week and we’re getting settled. It’s a beautiful space with an amenities floor that has free specialty coffees, beer and wine, as well as some pool tables and comfy couches to hang out and play games with your coworkers. It’s a really great move for our company, and I look forward to getting into a new groove there. Plus, I can see my house from my floor (and almost from my desk)! 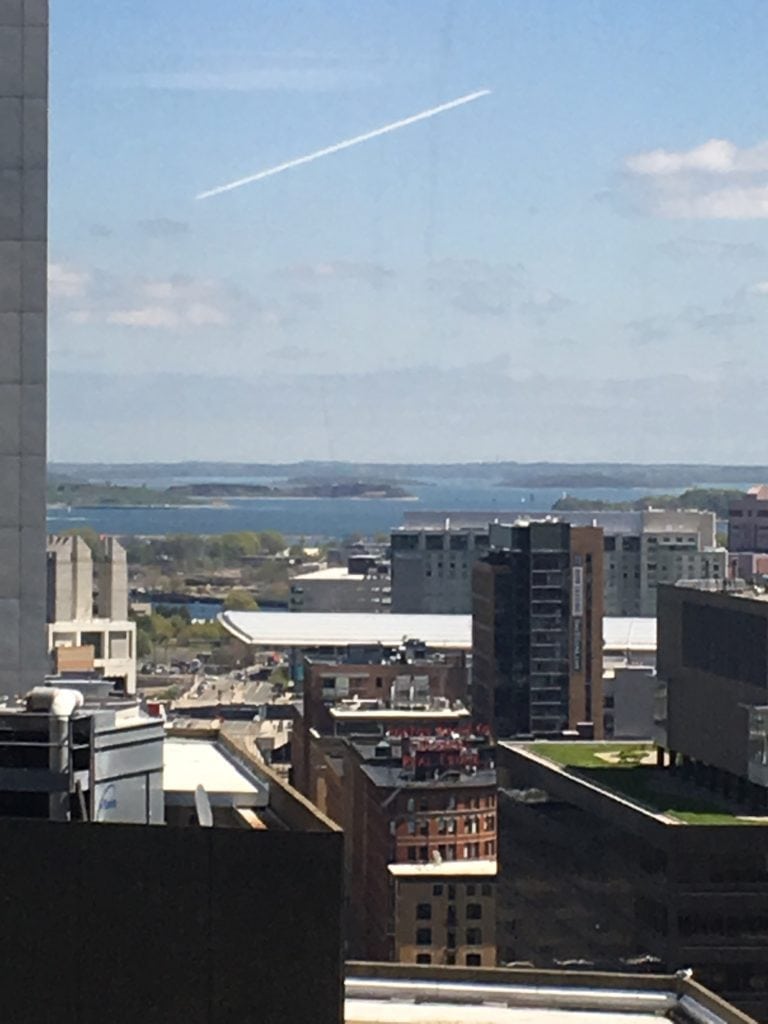 The thing about having to wait until the weekends to do blog work is that the weekends are also the only time we can make real progress on the house. We’re getting close to being done with the big project stuff that we want to do ourselves in the short term, so that will start to free up some more of my time again to allow for all things food blogging. But I’d like to show you a few of the things that we’ve worked on so far… 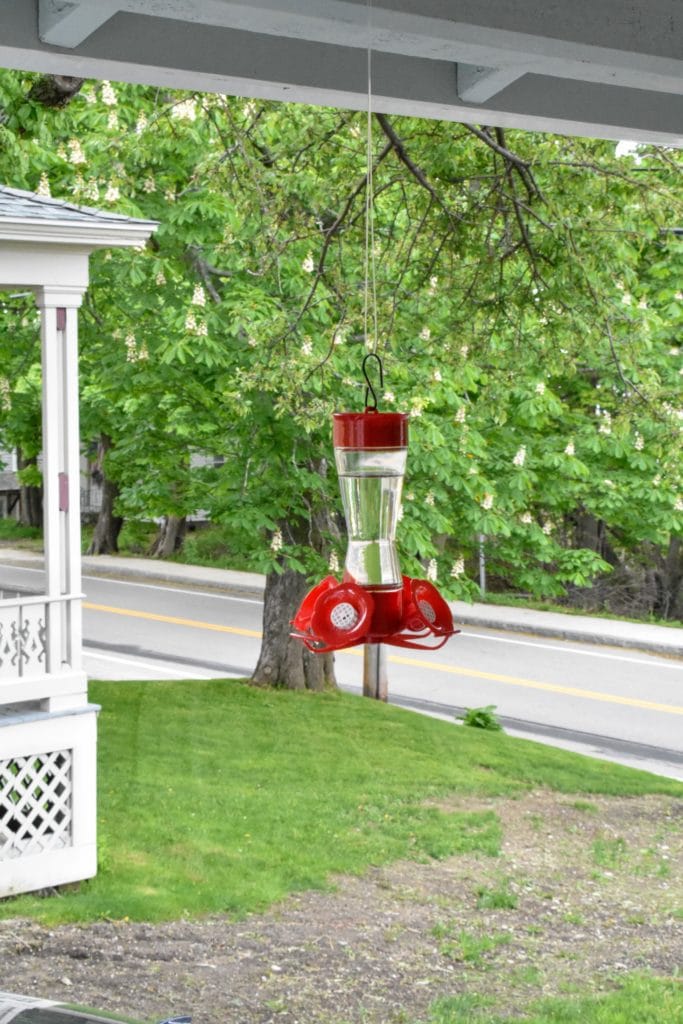 Guys, we’re getting there. Most of the rooms are cleared out and usable. None of the rooms are decorated, which is killing me ever so slightly. The master bedroom closet hasn’t yet been built (being done by California Closets), and the couch we ordered is still another ~6 weeks away from arriving. OF WHICH… the couch. We’d been eyeing the Lounge II Petite Sofa from Crate and Barrel for months, and we finally sucked it up and invested in it… but we should have done it a while ago, because it’s custom and they gave us a 7-10 week turnaround time. We got the couch as well as an ottoman, and I can’t wait for them to arrive because our current couch is… well, less than ideal. And not terribly comfortable. And I kinda want to punch it in its metaphorical face. 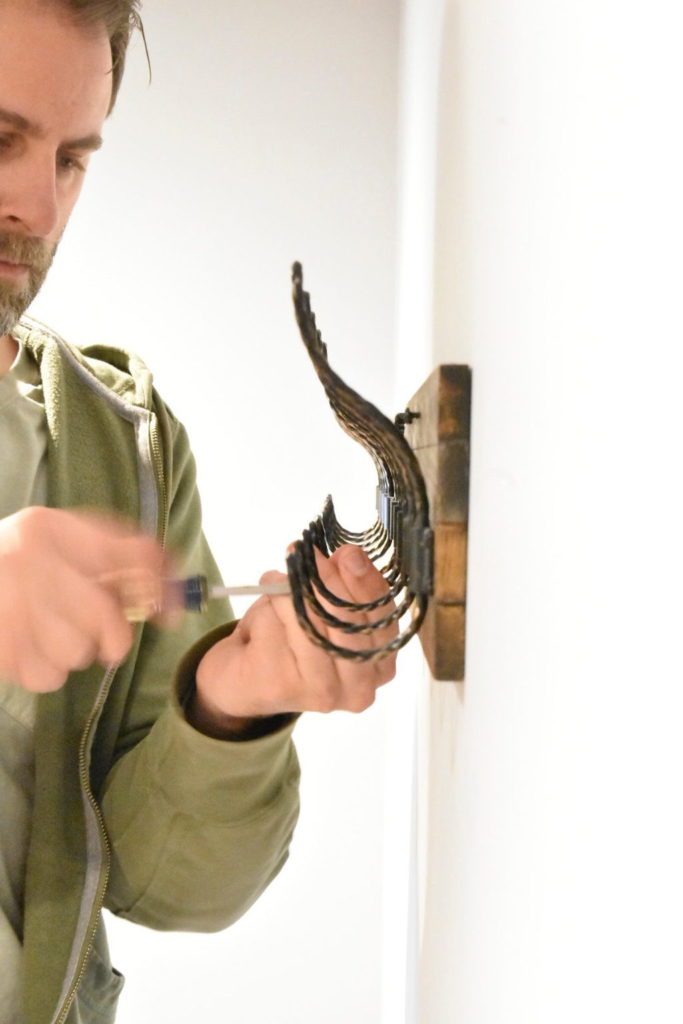 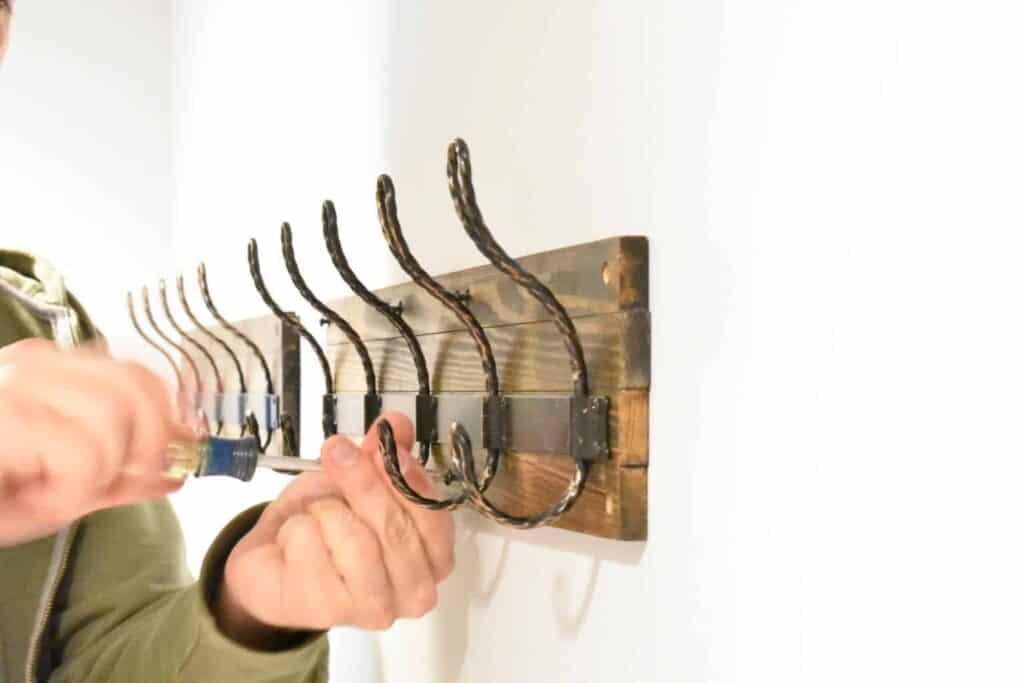 Our house doesn’t have any closets on the first floor. No pantry, no coat closet, nothin’. So, we’re having to build out a pantry (also being done by California Closets in a couple weeks – eep!) and we decided to do a row of hooks in the back hallway to hang our coats. I have an IKEA console table that fit perfectly in that hallway to store gloves, scarves, etc. and we can use the top for my purse and to set things down as we come and go. I’m really happy with the result! 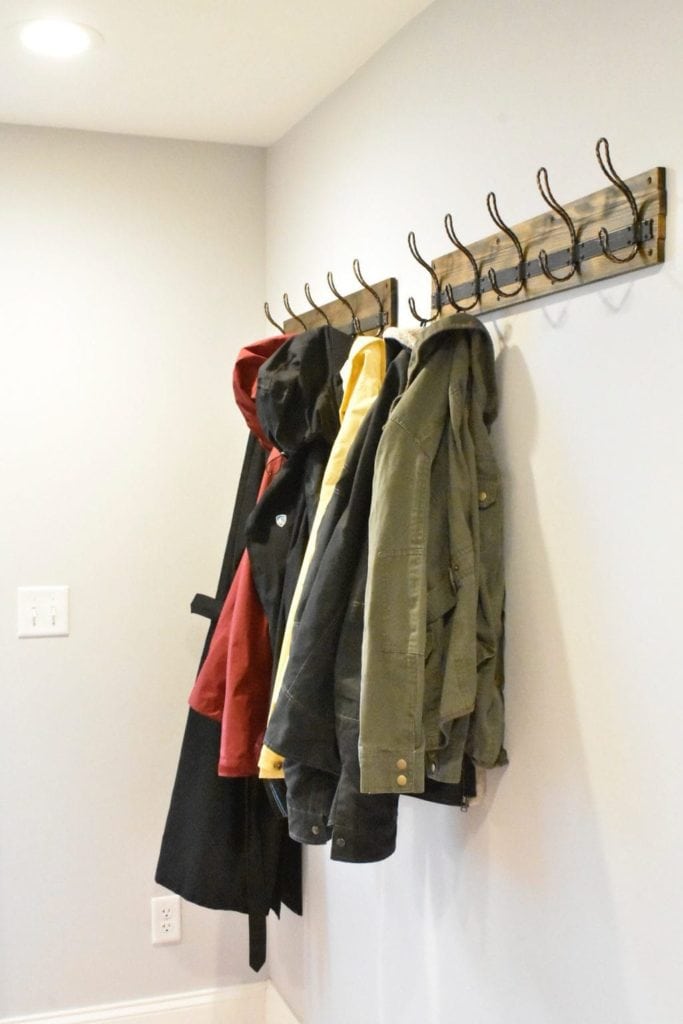 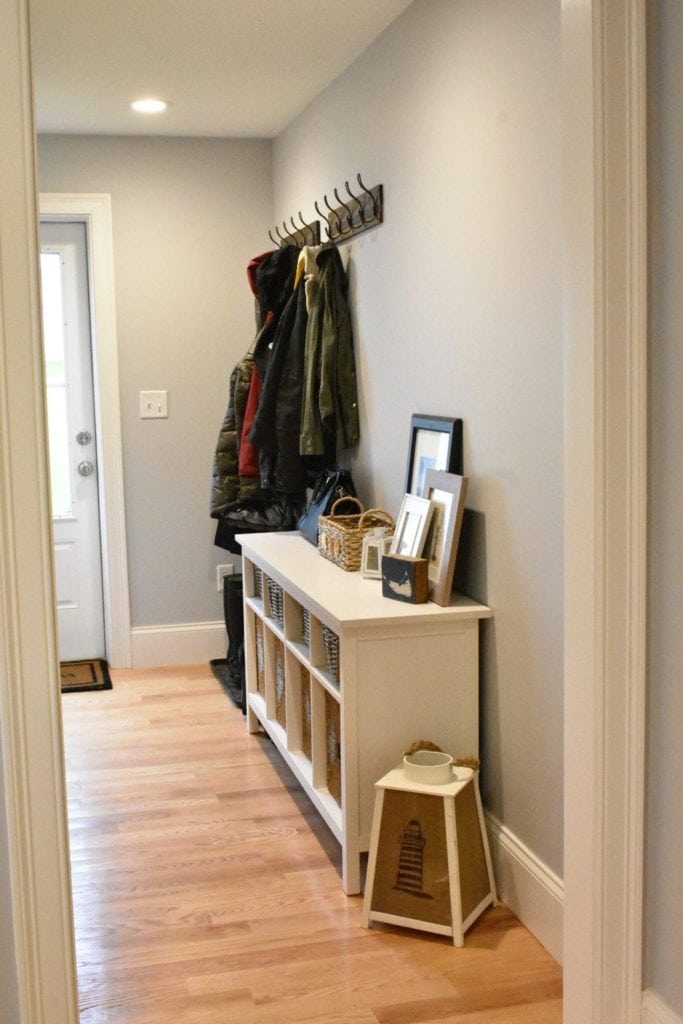 We’re also working on the laundry room. Well, not laundry room – laundry closet. This is one part of the house that we’re not thrilled with, as far as the work that was done during the restoration goes. There were a handful of things that were just done… wrong. They didn’t make it deep enough for a washer or dryer (hardly even deep enough for the tiny, ineffective compact kind), so we couldn’t put the appliances in there and close the doors. Not even a little bit. So, we had to take the doors and the frame off altogether, which means it’s just hanging out in the open as soon as you walk in the back door, and that’s the entrance we use most often. It’s disappointing, to say the least. We were able to get the frame back on – it’s tight, but it’s on. However, it’s unfinished so we need to paint it to match the rest of the wall. 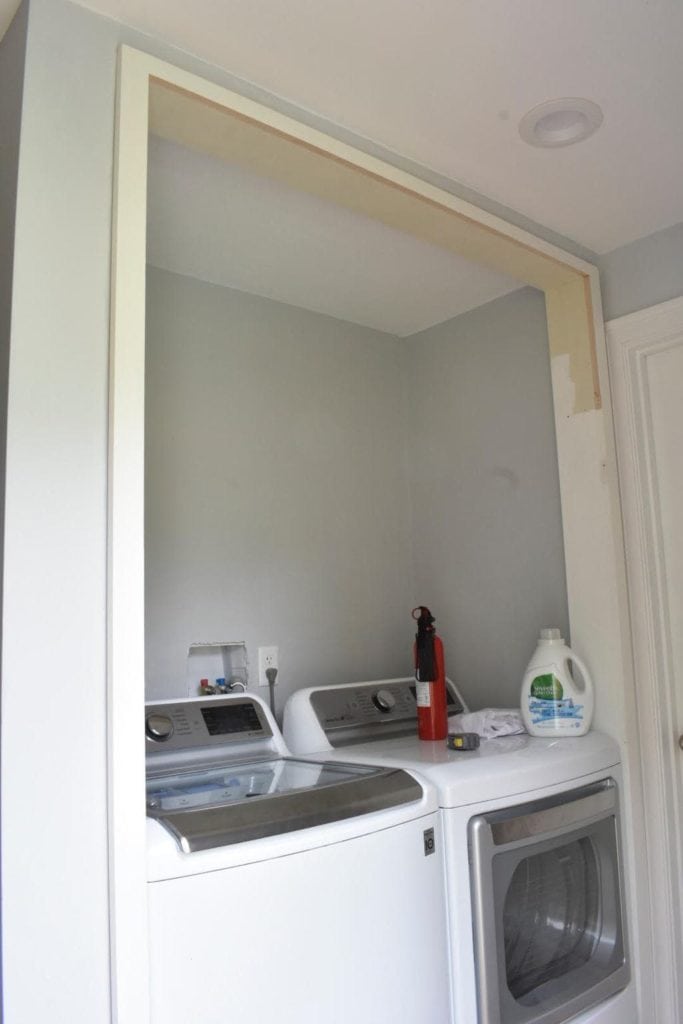 There’s also no storage in that “closet” at all, so we just put up a simple shelf to hold detergent, stain remover, etc. It’s not very pretty, but it’s functional. Once it’s painted and I figure out some way to cover/hide the hose connections, I think I’ll feel better about it. And if you’re going to suggest putting up a curtain, go ahead and don’t. Not to be rude to anyone that has that solution in their own home, but I just can’t look at that without feeling like I’m in a college dorm. Even more than aesthetics, I’m looking for a way to close it off to contain the noise a bit, so a curtain wouldn’t accomplish that for me. Again – no offense if you have a curtain on yours. I’m sure it’s perfectly lovely and I’m sure I would even compliment it if I came to your home! It’s just not for me. 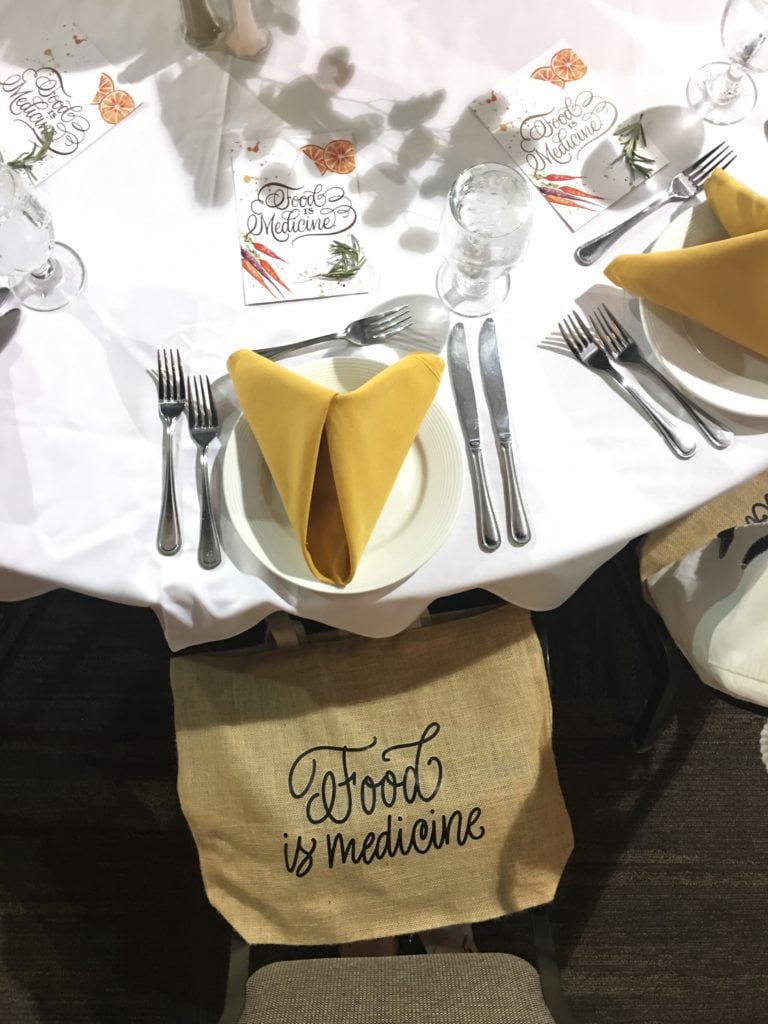 The other week I had the pleasure of attending the Everything Food conference in Salt Lake City. Before that, I’d never been to a food conference or SLC, so it was two birds with one stone! I got to meet so many amazing people, learned a TON, have what feel like endless notes of things I need to do to improve this here blog, and I even left with some newfound friendships. 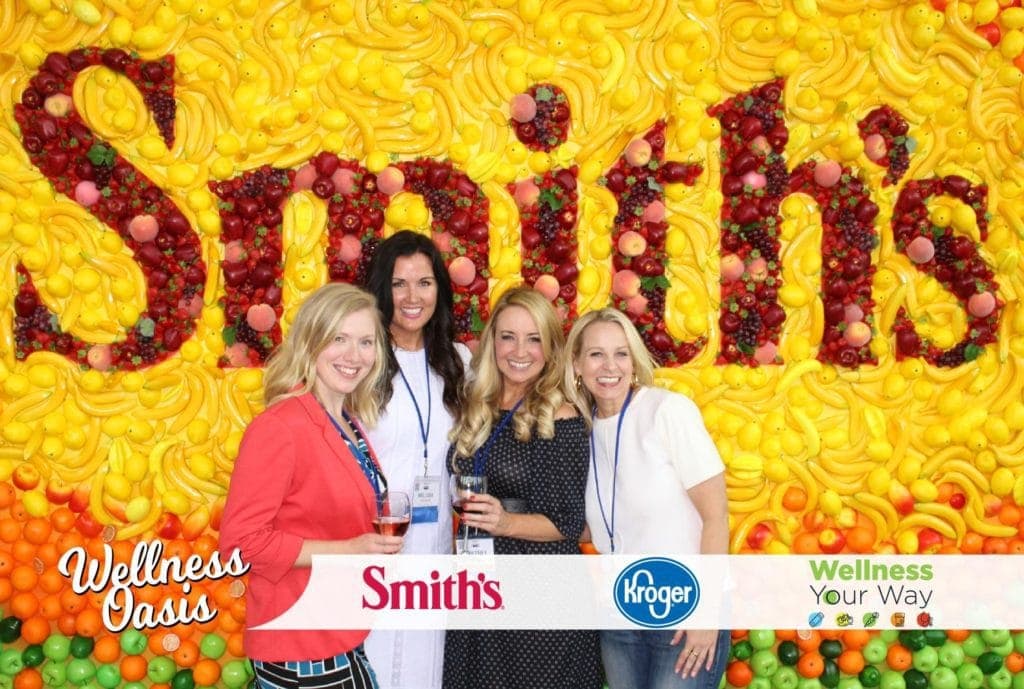 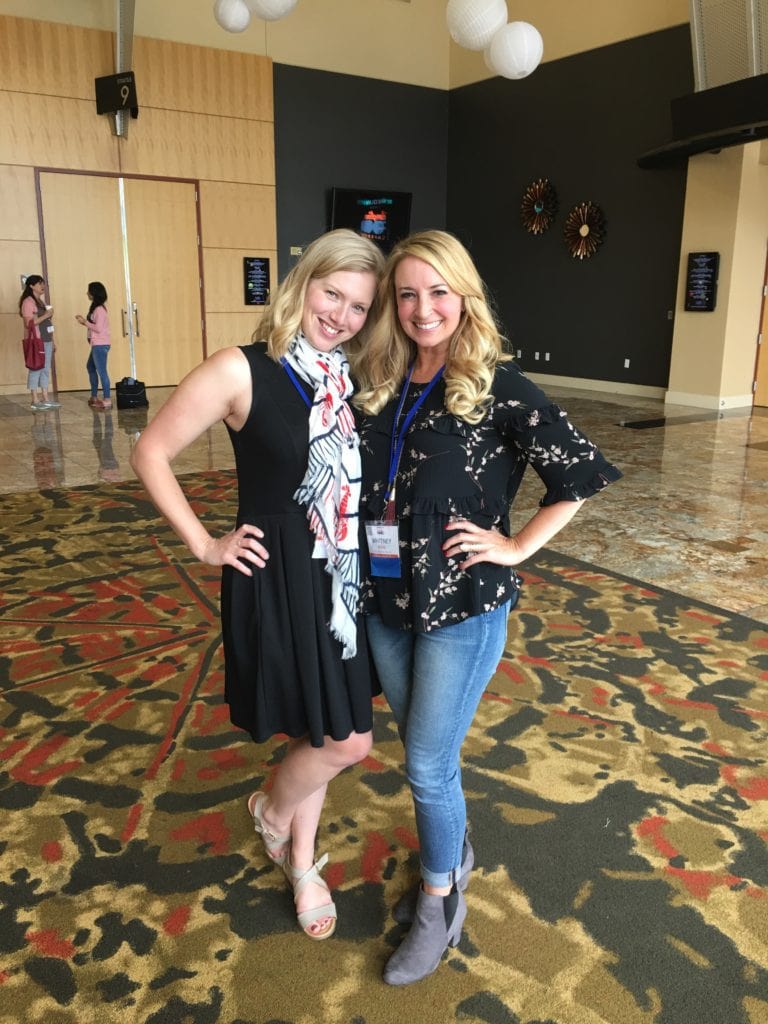 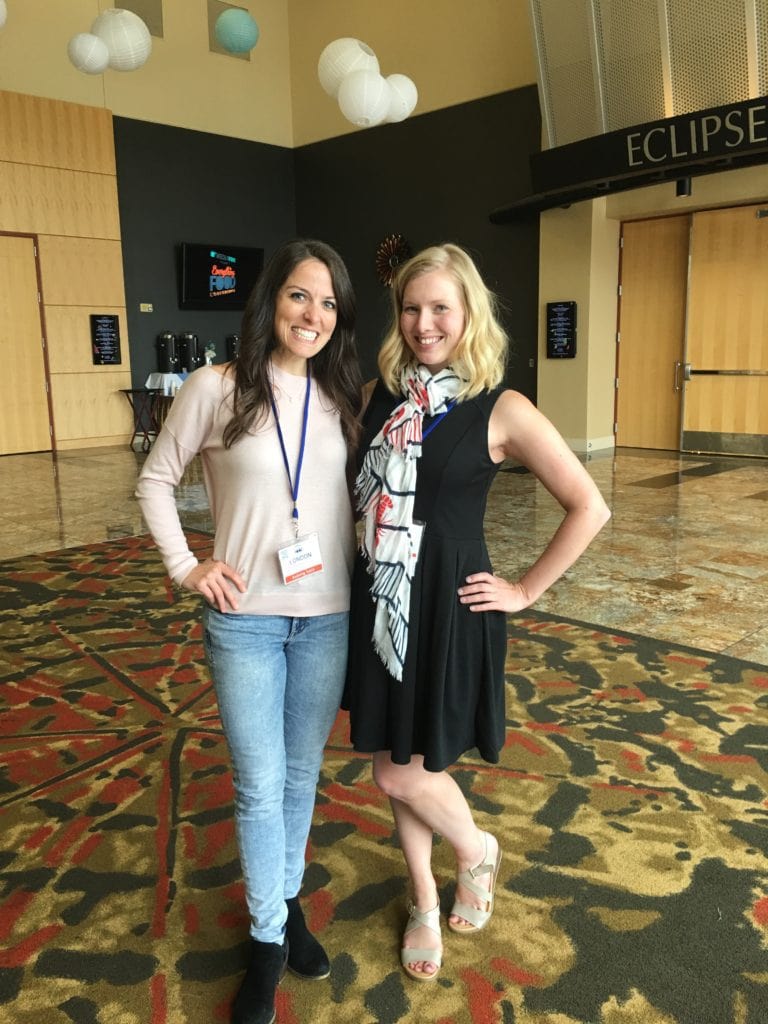 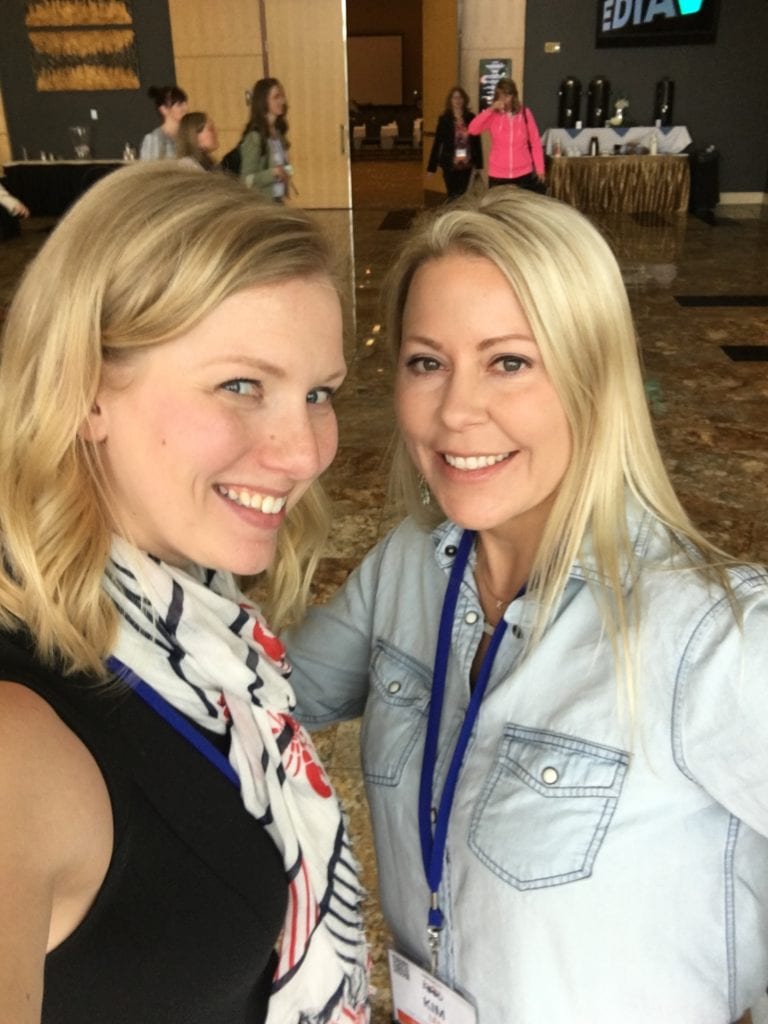 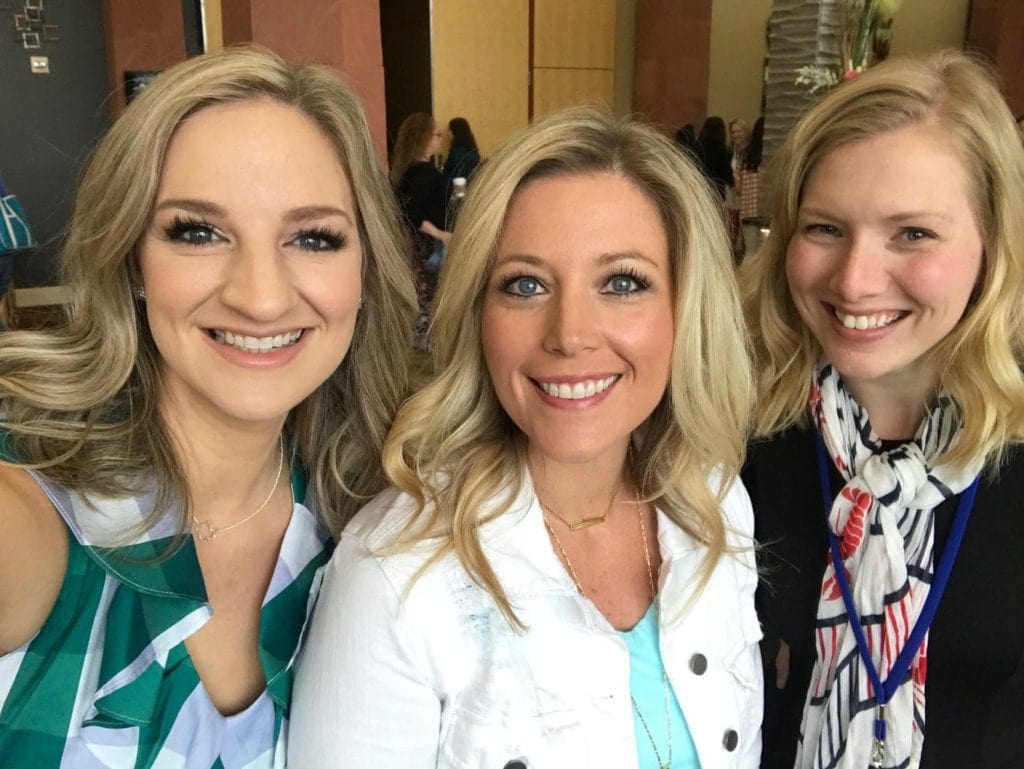 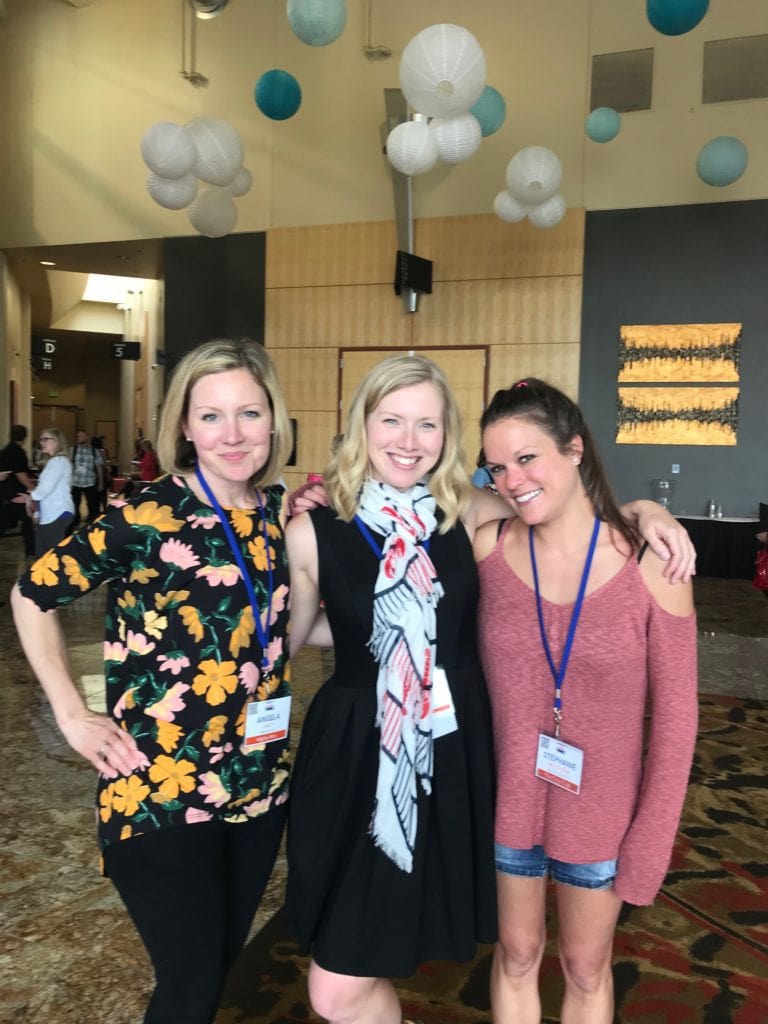 I roomed with the fabulous miss Whitney Bond and she embraced my goal of the trip: get me out of my comfort zone! I don’t do well in crowds, speaking in public, or being on camera. I did all of those things and then some. If you were following my Instagram stories during my trip, you saw some of the fun that was had, like singing and dancing at 9am. It was so much fun!

I even met Bjork of Food Blogger Pro and Pinch Of Yum fame (and yes, he’s exactly as nice as you’d expect) and Amanda of I Am Baker (I just adore her, and I’m pretty sure I totally creeped her out by the end of the trip). 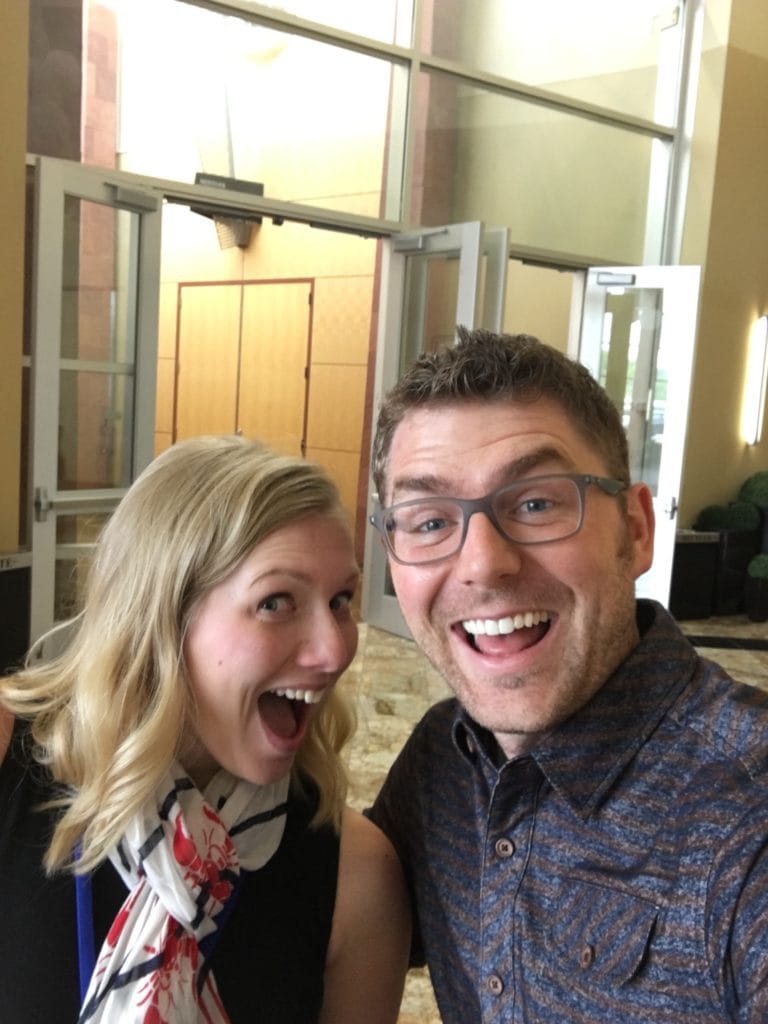 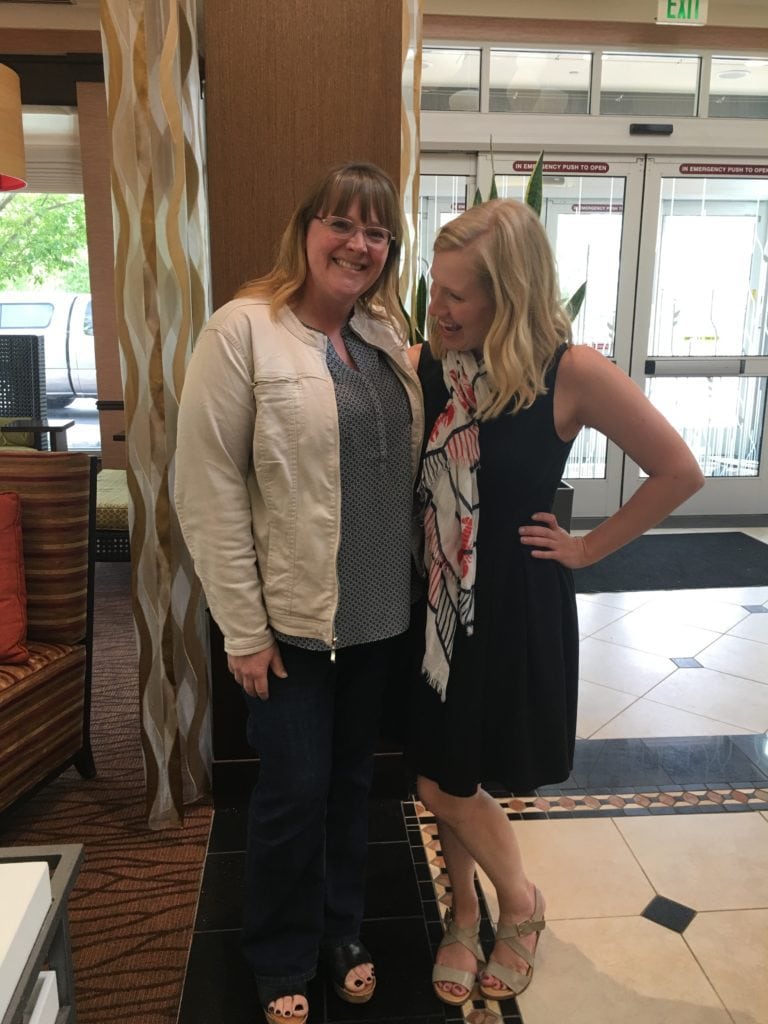 There were sponsored breakfasts and dinners, wine breaks, tons of sponsors to chat with, lots of laughs. I can’t wait for next year – I’ll be better prepared and have so much to look forward to! 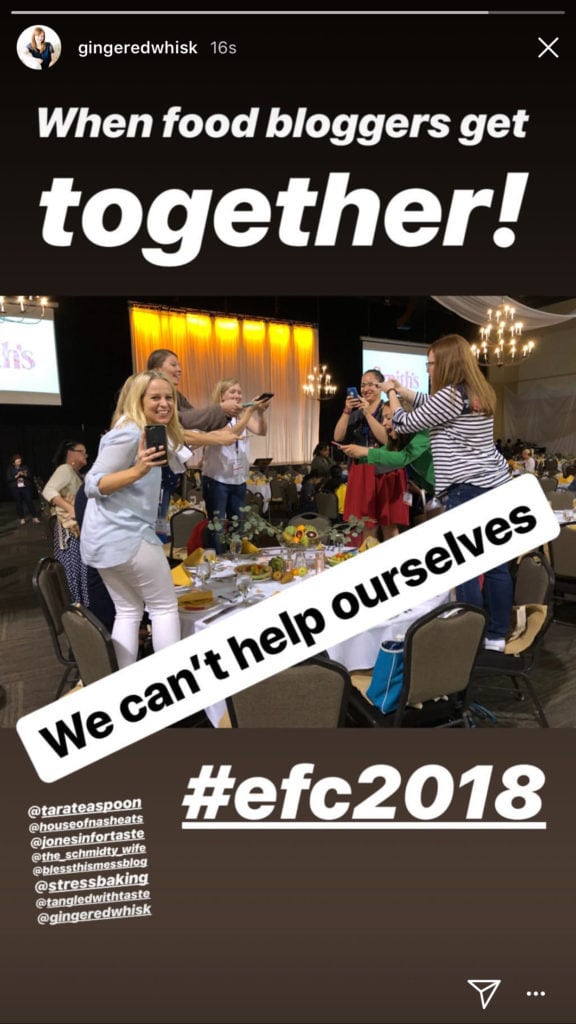 I hope you all have a great week ahead, and I’d love to hear what’s going on with you in the comments!

S'mores Tots from "Tots!"
← Previous
Strawberry S'mores Icebox Cake
Next →
Let us know what you think!Click here to cancel reply.

You might also consider a decorative screen that can be folded and moved out of the way.

Since you have ample space above your washer and dryer, you might consider a roll-up door for enclosing your laundry "closet." It appears that there would be room to operate a roll-up door without interfering with opening and closing the door on the right in your photo. Just a thought.